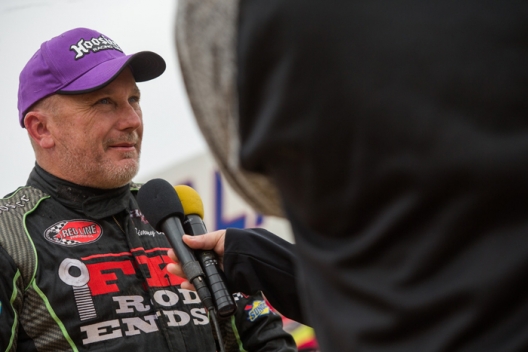 PHENIX CITY, Ala. — It took awhile, but drivers finally got a track surface a little closer to what they expected at East Alabama Motor Speedway. The change from a rough-and-tumble, up-on-the-wheel surface to a slicker track in need of a little more finesse did little to slow down Jimmy Owens though. Picking up where he left off 12 hours earlier, Owens, of Newport, Tenn., notched his second preliminary feature victory of the day to secure the pole for Sunday’s 43rd annual National 100.

“It was a lot slicker. We didn’t have as much cushion and the track wasn’t near as rough,” Owens said. “They did a heck of a job prepping everything. We looked at the track to begin with there and I (thought) this thing’s gonna slicken over. Then they ran the other class and it looked like it bled back and I’d already made my changes and we went out and I was like, ‘Uh oh, we might of messed up.’ But the track started blowing off and we had a good car there at the end.”

Owens overtook polesitter Chris Madden of Gray Court, S.C., as they raced through traffic on lap 27 and led the rest of the way to close out a dominating Saturday at East Alabama. He collected $5,000, running his total to $10,000 on the day.

Tim McCreadie shuffled Madden back to third on lap 28 and chased Owens to the finish for his second podium of the day, assuring that the Watertown, N.Y., driver will start alongside Owens on the front row of Sunday’s 100-lap, $20,000 to win feature. Madden held on to claim third, a solid rebound after finishing 25th in the first prelim. Jonathan Davenport of Blairsville, Ga., finished fourth, with Scott Bloomquist of Mooresburg, Tenn., finishing fifth.

“We’ll just go back and look at some notes and hopefully we’re competitive enough (Sunday) and we get a good starting spot were we can hold ‘em back,” McCreadie said. “There’s a lot of good cars. Leading’s not very good here because when you catch guys, you’re kind of a sitting duck. You get out of that little bit of traction and the guy behind you doesn’t and he gets such a run. I don’t know, being the leader isn’t always fun right now.”

Second-starting Kyle Bronson of Brandon, Fla., led the first 13 laps before giving way to Madden. Bronson slipped to seventh at the finish, but that, combined with his runner-up finish in the first prelim, will put him third to start Sunday’s race.

Madden led some 14 laps and looked as though he was headed for a runaway victory midway through. His third-place finish leaves him tied with four other drivers with the 10th-most prelim points. Considering his misfortune in the first prelim, Madden’s mid-pack starting spot for Sunday’s feature isn’t terrible.

“We had a bad experience in the first race there,” Madden said. “We tore a water pump off the front of the motor, so we really was just shootin’ in the dark there for what we needed in the feature. We had a good car, but about halfway through, I don’t know, I sealed the right rear tire up or whatnot and I got (too) free. (After) a couple of cautions I got back going again. So I think we’ve got a good car for tomorrow.”

The race was slowed by six cautions, the last appearing on lap 36 of the 43-lap affair. Owens bolted away on the restart and built a comfortable advantage over McCreadie. With five laps remaining he led by 1.298 seconds before winning by a 1.181-second margin.

Drivers rolled to the frontstretch for the main event at 11:57 p.m. ... With 10 drivers scratching from Saturday’s second program, drivers will start straight up from their qualifying times with the first group occupying the inside row and the second group filling the outside row. … With no consolation race, 26 drivers will start the A-main. … Chris Madden of Gray Court, S.C., bounced back from a 25th-place finish in Saturday’s first feature by setting the overall fast time and grabbing the pole for the day’s second main event. … Nearly 10 hours went by from the finish of the first 43-lap feature to the 10-minute call of the second 43-lap preliminary feature. … Drivers scratching from the second program: Jason Hiett, Casey Roberts, Ray Cook, Clint Smith, Michael Page, Shane Clanton, Chase Junghans, Austin T. Smith and Dane Dacus.