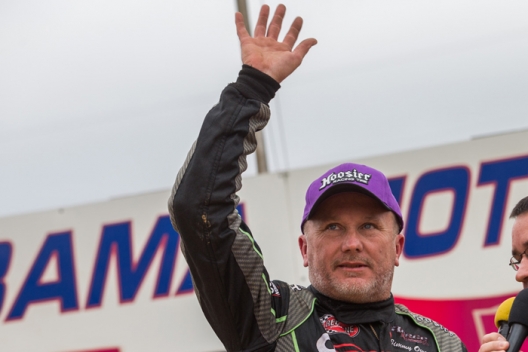 PHENIX CITY, Ala. — Jimmy Owens knows how to get around East Alabama Motor Speedway, regardless of the track conditions. Flashing the type  of speed that carried him to National 100 victories in 2012 and 2015, Owens, of Newport, Tenn., tamed a rugged racing surface Saturday afternoon to win the first preliminary feature for the 43rd annual National 100. The main event was postponed from Friday night, when a choppy track surface halted action at EAMS just before the 43-lap main event.

A day later, the reworked track was better, but far from ideal. Owens adapted nicely however. He took the lead from Steven Roberts following a restart on lap 12 and led the rest of the distance to win the prelim. Kyle Bronson of Brandon, Fla., slipped by Tim McCreadie in heavy traffic to claim second at the finish. McCreadie, of Watertown, N.Y., settled for third.

Brandon Overton of Evans, Ga., rallied from 26th to finish fourth after running as high as second, and Dale McDowell of Chickamauga, Ga., completed the top five. Owens earned $5,000 for the victory.

“This track’s pretty wicked right now, but there probably ain’t a whole lot they can do considering the weather and stuff,” said Owens.”These next two races are gonna be a battle of (attrition) ‘cause it’s just so slick out of the brown (tacky surface). When you get out of the brown you’re just way slow and the brown is just way rough. You know, the weather’s terrible and they can’t do nothing about that, but I appreciate the effort.”

Bronson and Roberts inherited a front-row starting position when 22 of the 26 starters failed to report to the starting grid on time following the 10-minute call. Race officials moved the four drivers who did make it on time — Bronson, Roberts, Dane Dacus and Mark Whitener — to the front row, while the rest of the starters filled in behind them from the third row on back.

Owens was slated to start fourth after qualifying second quick in his group on Friday. The shuffle at the front, however, bumped him back to eighth at the start. It made little difference. He said his middle-of-the-road setup was key to getting to front and staying there.

“You just gotta gamble (on setup),” said Owens. “Is the track gonna be rough or is it gonna be slick and smooth like it usually is? We kinda gambled and went halfway in between and was able to capitalize on it.”

It was the unheralded Roberts who jumped ahead of Bronson on the opening lap with Dacus and Whitener giving chase. Roberts opened up a 1.363-second advantage and raced comfortably at the front until a caution for McDowell slowed the pace on lap 11. Owens, who was already up to third when the first of seven caution flags waved, drove by Bronson entering turn one on the restart. Catching Roberts at the end of the backstretch, Owens rolled by to assume a lead he’d never officially relinquish.

Overton made him work for the victory though. After starting shotgun on the field, Overton was up to second by lap 21. The two then traded sliders following a restart on lap 23 with Owens holding on to the top spot. Overton’s charge stalled over the final dozen circuits and McCreadie and Bronson were able to regain their spots. Bronson appeared to be headed for a third-place finish, but the lead pack caught slower traffic with two laps remaining. With the lapped cars tiptoeing to the finish, Bronson just managed to nip McCreadie at the flagstand. He said he was able to find a better line late in the race after fortuitously running out of tearoffs.

“I was just really, really tight the whole race. I didn’t expect (the track) to chop up like that,” said Bronson. “The whole race was just give and take. It was just a tough deal as rough as it was up there on top. You kinda had to let a guy go or go by ‘em. There with about 10 laps to go I ran out of tearoffs and had to change my line up a little bit ‘cause I didn’t have no more. Luckily when I moved up like that and turned across the racetrack, my car got better. I should have been doing that 10 laps before that.

“I felt like I messed it up myself by (getting the car) too tight. I shouldn’t have tightened it up. I felt like we had a car to win the race, but good job by Jimmy and Timmy and Brandon.”

McCreadie was just happy to grab a podium finish on a track that took it’s toll on both man and machine.

“Conditions are pretty bad out there,” McCreadie said. “Hopefully we can get back and get this thing back together and decide what we’re gonna do the rest of the weekend because my body ain’t keeping up no more with this stuff. You just (had to drive) through the ruts. The bottom and middle is so slick you can’t do nothing, so you just gotta run through them big holes up there and it’s just not easy.

Notes: Owens finished 1.201 seconds ahead of Bronson. … Fourteen cars finished the race, with defending National 100 winner Dennis Erb Jr., finishing 14th, six laps down. Nine the 14 finishers were on the lead lap. … Scott Bloomquist, who had heavy damage after being involved in Dale McDowell’s lap-11 spin, retired on lap 17. Bloomquist’s car had a small blaze under the hood as he headed to the pit area. The fire quickly went out. … Sixth-running Clint Smith got turned around on the front straightaway, collecting Michael Page, to bring out the third caution. Both cars have heavy damage. … Casey Roberts spins in turn four on lap 36 to bring out the seventh and final caution. The race was red flagged while emergency personnel checked on Roberts, who tagged the wall at the end of the straightaway.

Kyle Bronson and Steven Roberts inherited the front row when the clock expired following a 10-minute call and only four drivers had made their way to the track. Dane Dacus and Mark Whitener were the other two drivers. Those four were bumped to the front of the field, with Chase Junghans and Dale McDowell, the original front-row starters, falling in line in the third row. … Friday’s 43-lap National 100 preliminary feature at East Alabama Motor Speedway was rescheduled for noon Saturday. Citing unsafe track conditions and concern from competing drivers, EAMS officials opted to end Friday’s program following a rollover accident in a support division heat race. … Track officials added a bonus last chance race to Saturday’s early program, giving drivers who struggled with the Friday’s rough track conditions one final chance to make the main event. Jonathan Davenport and Brandon Overton took advantage of the opportunity and raced their way into the first feature of the day. … Davenport was slated to start on the second row of his consolation race on Friday, but he didn’t make the call after suffering apparent fuel pressure issues. Davenport sat in his car while his crew feverishly tried to get his machine running, to no avail. “It wouldn’t run during qualifying. I noticed (the fuel pressure) dropped a couple go pounds, but thought it would be alright,” said Davenport. “(Before the consolation) they system wouldn’t stay primed. It would run as long as you were standing there pouring (fuel) in (the carburetor).” … Overton originally failed to advance to the first 43-lapper following a lackluster qualifying effort and an even worse run in his consolation. Struggling to negotiate the choppy surface, Overton was running in seventh (three spots out of a transfer) when he pulled into the pits. … On Friday afternoon, Scott Bloomquist’s rig was stuck on the backstretch briefly after a track official said he could go around turns three and four to enter the infield pit area. The track surface was still way too soft, however, and Bloomquist was left marred in the much temporarily. … Updating the condition of Kyle Lewis, the cruiser division driver who took a scary ride down the front stretch Friday night, the speedway Facebook page said Lewis “has (had) several scans done and everything looks to be coming out GOOD. The transport via ambulance was non-emergency status and was taken just for observation, so he's sore and had more shock than anything else but okay.” The wild ride, which destroyed Lewis’s car, flung the car’s engine out onto the front straightaway.