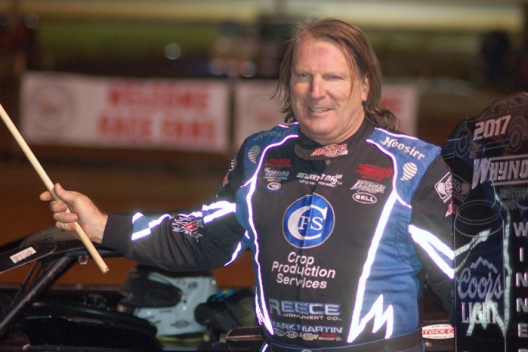 MERIDIAN, Miss. (Oct. 28) — There are few tracks out there that owe Scott Bloomquist anything. The Mooresburg, Tenn., driver has had his share of success during a brilliant hall-of-fame career. But after falling one lap short of winning the Coors Light Fall Nationals at Whynot Motorsports Park last year, perhaps Bloomquist was due to win the late-season special at the east Mississippi oval.

Bloomquist passed polesitter Dennis Erb Jr. of Carpentersville, Ill., on lap four and led the final 97 laps to win the 23rd annual Fall Classic. Brandon Overton of Evans, Ga., marched forward from the 16th starting spot to finish second, while Erb bounced around from first through sixth before finally settling for the third spot.

While Bloomquist enjoyed handsome leads at times — as much as four seconds and nearly a full straightaway — his victory wasn’t worry free. Before his triumph was certain, he had to survive eight cautions, the last of which he was nearly swept up in as he tried to negotiate lapped traffic.

Though his pass for the lead came on the top as he and Erb Jr. raced down the backstretch, Bloomquist was married to the low-side of the bottom dominant track for the final 70 circuits. As he tried to protect his lead around the hub, Overton rallied to the front, where he settled into second on lap 56.

With the backmarkers slowing Bloomquist’s pace, Overton began to reel in the leader, finally catching him on lap 72. With no where to go on the bottom, Overton made a go-for-broke run on the topside. But just as he was about to sail into the lead, Tyler Erb and Tanner Kellick got together directly in front of Bloomquist. As Erb spun toward the infield, Bloomquist got into the back of Kellick but managed to forge his way through, avoiding near disaster as the yellow waved.

“The racetrack was a little bit dry tonight and the bottom got dominant there at the end,” said Bloomquist. “I knew better than to get off the bottom. It rubbered up and had a traction strip around the bottom there.”

Overton’s pass was negated and Bloomquist was reinstated into the lead, after which he was never truly threatened. He ran in clear track over the next 21 laps and even after catching the rear of the field again with five laps remaining, Bloomquist easily held off Overton at the finish.

Overton knew the caution cost him his only shot at getting by Bloomquist.

“If that caution hadn’t come out, that would’ve been (it),” said Overton. “He does a good job. He put himself in position to win that race and he deserves it. They all work hard. You can’t take nothing away from him. He saw me a lot through the year. Like I said, he’s one of the best there ever was, so to run second to him, we’re not gonna hang our heads. We just gotta start a little closer up front. You can’t win every race from 20th.”

After giving up the lead on the fourth lap, Erb found himself in an uphill battle. He struggled on a couple of mid-race restarts and was constantly trying to battle back into the top three. After a lengthy caution on lap 44, he slipped all the way back to sixth before reclaiming the lost spots.

“That one last restart I got hung up on a couple of cars and it dropped me back there and I had to fight my way back,” Erb said. “Them restarts kinda killed us. And the racetrack rubbering up little bit, we got real tight there at the end. I should’ve got up there on the top with Scott when he was up there (early in the race), but the bottom was just so clean.”

Like Erb, Overton was hoping the track would widen out a bit as well, but it never did.

“I wish it wouldn’t have rubbered,” Overton said. “I know we had a car we could’ve raced and it would’ve been a little better for these fans to see. Hell, I gave it my all and that’s all I could do.”

Notes: Along with his runner-up finish in last year’s Fall Classic, Scott Bloomquist finished eighth in 2010 and 17th in 2003. … After being slowed by eight cautions in the first 74 laps, the race ran green over the remaining 26 circuits. … The seventh caution, which appeared on lap 44 was due to a four-car tangle that sparked on-track retaliation by Jack Sullivan and later a physical altercation between two of the participants, Sullivan and Cade Dillard. Dillard and Sullivan got together in turn four, collecting Brian Rickman and Allen Murray. Sullivan then ran into the side of Dillard’s machine during the caution, resulting in Dillard’s car rolling over on its lid. After the two drivers exited their cars, they then had to be restrained when a physical altercation took place in turn three. The race was red-flagged for about 10 minutes. … Clay Daly arguably came from further away than any driver at Whynot, both on the track and off. While Daly ventured to Whynot from Salinas, Calif., his on-track route to a 13th-place finished came from pretty far back as well. In fact, no driver in the starting lineup had to pass as many cars as Daly just to make the show. Daly qualified 20th out of 21 in the first group and he only managed to out-time two cars of the entire 42. He finished eighth in his heat Friday and then transferred into the A-main with a fourth-place finish in his consy on Saturday. It was a long road, but worth it for the young Californian. … Two drivers at Whynot showcased vintage throwback wraps in honor of a couple of racers who passed away recently. David Breazeale honored Johnny McCool, father of Mississippi racer Bub McCool, with a yellow and red scheme baring a red and purple No. 41J designed like one of the car’s Johnny drove during his on-and-off racing career. Johnny McCool lost his life in an automobile accident on Oct. 13. … B.J. Robinson of Bossier City, La., piloted an orange and white No. 01 in honor of his father Billy Robinson, who passed away in September. … Chris Simpson’s fourth-place finish came aboard the No. 98 normally piloted by Jason Rauen of Farley, Iowa.

After nearly 10 straight hours of rain fell on the eastern Mississippi oval overnight, the sun finally burst through the clouds around 10:30 a.m. Saturday. Drivers were met with a crisp Fall day with temperatures hovering in the mid-50s. … Rain wasn’t unexpected on Friday, in fact it was anticipated by most. So it was a pleasant surprise when officials managed to get all of the Super Late Model prelims in the book by 11 p.m. — about two hours after rain was supposed to hit the area. The final Crate Late Model race was on the track when the skies finally opened up, forcing a halt in the action. With several of Friday’s support division prelims still remaining, Saturday’s driver’s meeting is set for 5:30 p.m. … Fast qualifier and winner of the first heat, Dennis Erb Jr. of Carpentersville, Ill., will start the 100-lapper from the pole. Erb is debuting a new Black Diamond Race Car. “Hopefully we can tune on it and be up front in the (feature). We’ll just work on it a little bit, watch the racetrack and hopefully make all the right adjustments.” … All four heats were won from the front row, with Erb Jr. and Scott Bloomquist winning heats one and two from the pole and David Breazeale and Ross Bailes winning heats three and four from the outside front row. … Both Jack Sullivan of Greenbrier, Ark., and Brandon Overton of Evans, Ga., transferred into the A-main after starting sixth in their respective heat. No one came from further back to transfer. … Heat four winner Ross Bailes of Clover, S.C.,  said he didn’t really have a gameplan for the feature. “I don’t really know what to expect,” said Bails. “Just try to keep the car underneath me and save my tires a little bit for the end. Hopefully I can get out front at the beginning and that will make it a lot easier.”

Taking the track third overall, Dennis Erb Jr. of Carpentersville, Ill., turned the quickest lap of the night. Erb stopped the clock at 12.944 seconds, the only driver to turn a sub-13-second lap. Erb earned the pole for the first heat race and will start alongside Chris Simpson of Oxford, Iowa, who was third fastest in the first group. Scott Bloomquist of Mooresburg, Tenn., was the fastest in the second group and earned the pole for the second heat. Bloomquist turned a quick lap of 13.320 seconds. Jimmy Cliburn of Star, Miss., will start beside Bloomquist on the front row of the second heat. Gavin Landers of Batesville, Ark., was second quick in the first group to grab the pole for the third heat beside David Breazeale of Four Corners, Miss. Dane Dacus of Lakeland, Tenn., was second quick in the second group and starts on the pole of the fourth heat, with Ross Bailes of Clover, S.C., to his outside.