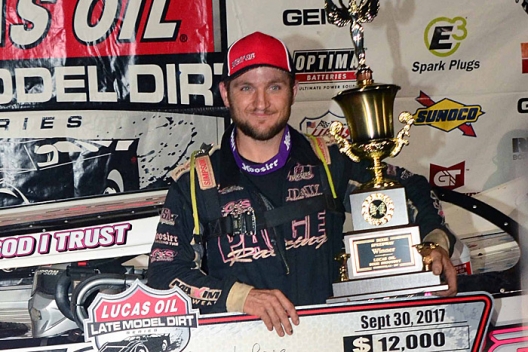 WOODSTOCK, Ga. (Sept. 30) — Michael Page knows how to get around Dixie Speedway. He proved it to the Lucas Oil Late Model Dirt Series regulars on Saturday night.

Competing in his home track’s biggest event, the 33-year-old driver from Douglasville, Ga., drove the race of his life to capture the 60-lap Dixie Shootout and a career-high $12,000 payday.

Page, who won back-to-back Super Late Model championships at the 3/8-mile Dixie oval in 2011 and ’12, advanced from the fourth starting spot to overtake race-long pacesetter Don O’Neal of Martinsville, Ind., for the lead on lap 23. He controlled the remainder of the distance, staving off a challenge from O’Neal following a late restart to beat the former Lucas Oil Series titlist by 1.822 seconds and realize his dream of a national touring series triumph.

“I figured if there ever would be a place to win it, I could win it here,” Page said after receiving a hug-filled reception in victory lane from his family, team members and friends. “You can race here all you want, but when these guys come here you gotta do something and figure something out.”

The local standout’s upset win was just one major storyline of the night. The Lucas Oil Series championship battle tightened to historic proportions, going from an 85-point difference between first and third place to a mere 20 points separating the top three drivers with three events remaining.

Scott Bloomquist of Mooresburg, Tenn., who entered the evening third in the standings, gained one spot thanks to a third-place finish. He jumped ahead of Watertown, N.Y.’s Tim McCreadie, who finished 11th, and closed to within 15 points of leader Josh Richards of Shinnston, W.Va., who managed just a 16th-place finish after using a provisional to start 23rd.

Page’s victory doubled his previous richest score, which came earlier this year, on Jan. 15, when he collected $6,000 for winning the Ice Bowl at Talladega Short Track in Eastaboga, Ala. That race was his first driving for South Carolina trucking company owner Troy Baird, whose Stinger Race Car Page piloted to a milestone checkered flag on Saturday night.

“It’s been an up-and-down season,” said Page, who earlier this season reached victory lane at Dixie after a regular show on July 22 and a $4,000 Ultimate Southeast Super Late Model Series event on July 29. “It’s wearing me out and I’m trying everything and I just ain’t giving up. I do what I can with the little team here.”

Page assumed command of the 60-lapper for good after he ducked underneath O’Neal’s Clint Bowyer Racing Club 29 Race Car on lap 23, but the ultimate moment of truth came after the race’s third and final caution flag flew on lap 46 for the slowing car driven by Gregg Satterlee of Indiana, Pa. O’Neal slid to the outside of Page’s No. 18 rounding turns three and four following the restart and again off turn two on lap 47, but Page turned back the threat and pulled away slightly the rest of the way.

“I figured I had to move up,” Page said. “I didn’t really know what to do, but sometimes you keep your momentum around the track and get up. I just couldn’t give it to (O’Neal), so I had to do what I had to do.

“I was worried about the right-front (tire), especially here because you have a good front end. I just wasn’t pushing it too early and was hoping (O’Neal would) burn his stuff up and I think it worked out.”

O’Neal, 53, was glad to see the late caution flag wave, but he couldn’t execute his plan to sweep around the top of the track and unseat Page when the green flag returned.

“I thought I could get around him on the outside, just momentum him,” said O’Neal, who from the pole position and led laps 1-22. “He done the right thing — he moved up and blocked me, and then it was pretty much over with.

“We was just too free getting in,” he added. “He was just a little better tonight.”

The 53-year-old Bloomquist surged from the fifth starting spot to third early in the race and stayed there to the finish.

“It was good, definitely good,” Bloomquist said of his Sweet-Bloomquist machine. “I thought I was gonna get by Don (O’Neal for second), but the line he was running, where he went in low and then drifted up to the top, it just kind of killed any momentum I got.”

Bloomquist initially thought his podium run had vaulted him into the Lucas Oil Series points lead, but he later learned that he had only moved to second. He was confident, however, about his chances of grabbing that top spot in Sunday night’s Lucas Oil Series stop at Rome (Ga.) Speedway.

Prior to Satterlee triggering the race’s final caution flag, earlier slowdowns came on lap two when T. J. Reaid of Acworth, Ga., spun in turn two and lap three when Earl Pearson Jr. of Jacksonville, Fla., spun to a stop after contacting a sideways Darrell Lanigan of Union, Ky.