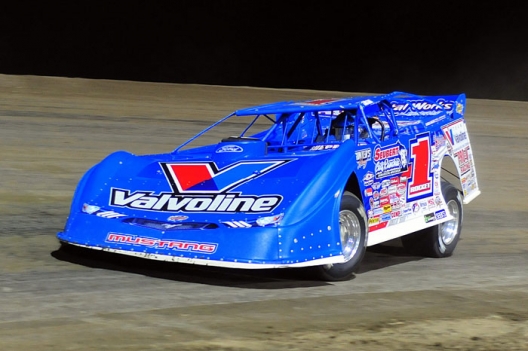 On Sunday night the 24-year-old star from New Berlin, Ill., completed a sweep of the three-race World of Outlaws Craftsman Late Model Series swing through the nation’s midsection, passing race-long pacesetter Tyler Erb of New Waverly, Texas, for the lead on a lap-23 restart and then running away with the 40-lap feature at 81 Speedway.

The $8,000 triumph was Sheppard’s 17th of the 2017 WoO campaign — tying him with Darrell Lanigan for the second-winningest season in tour history and moving him within one win of matching Josh Richards’s single-season record set last year — and sewed up his perfect trip with the Rocket Chassis house car team. He also captured $10,000 victories on Friday night at Lakeside Speedway in Kansas City, Kan., and Saturday evening at Salina (Okla.) Highbanks Speedway.

“Between Kansas and Oklahoma — man, they got some really awesome racetracks out here,” said Sheppard, who emerged triumphant in his first-ever start at all three ovals. “It’s kind of darker dirt, more like I’m used to (growing up at Illinois tracks), so I guess I just fit right in.”

Sheppard was untouchable once he gained command as lap 24 was scored in the first-ever WoO event at the 3/8-mile track outside Wichita. He raced unchallenged to a final victory margin of 4.469 seconds over Erb, the 20-year-old WoO sophomore who settled for his sixth runner-up finish of 2017 on the national tour after starting second and leading laps 1-23 in his XR1 Rocket car.

Polesitter Austin Siebert of Grandview, Mo., finished third in his family-owned Black Diamond machine, registering a career-best WoO placing. Chase Junghans of Manhattan, Pa., picked up two spots in the final laps to finish fourth at his home-state track while Shane Clanton of Zebulon, Ga., placed fifth and running fourth for much of the distance.

Devin Moran of Dresden, Ohio, sixth in the finishing order after being knocked from the top five by Junghans. Racing on the eve of his 23rd birthday, he fell just short of joining Sheppard as the only drivers with top-five finishes in all three weekend features.

Sheppard started third in the series’s season-low 17-car feature field and spent the race’s first half in the position. He turned on the speed at the crossed flags, however, overtaking Siebert for second on lap 22 and then sailing around the outside of Erb to grab the point on the lap-23 restart that followed the A-main’s lone caution flag for the slow car driven by Brent Larson of Lake Elmo, Minn.

“I think we just made a little bit better call on tires than Erb did,” said Sheppard, who claimed his 23rd career WoO triumph. “I think he had a really good car, but I think I found that top a little bit sooner than he did. I thought for sure his crew guys would tell him to go to the top after that caution, but I was pretty far back at that point so maybe they didn’t see me back there.”

“Man, what a heck of a year,” said Sheppard, who pushed his 2017 WoO earnings to $279,600 with his 33rd top-five and 36th top-10 finish in 40 features. “It’s been really great. Rocket Chassis … these XR1s are just phenomenal, man. They really put in the work the past few years and these things are really top-notch, second-to-none for sure.”

Erb’s bid for his long-awaited first-ever WoO victory fell short once again. He built a hefty advantage of as much as 4 seconds during the race’s first half but couldn’t turn back nor stay with Sheppard after the lap-23 caution period.

“I didn’t really want to see the caution, but it happens,” said Erb, who tallied his first WoO top-five run since a second-place finish on July 14 at River Cities Speedway in Grand Forks, N.D. “It just wasn’t my night, (but) running second to Sheppy, that’s as close as you can get to a win. He’s obviously the best car in the country.

“We were pretty good. We were a little softer on tires … it didn’t really hurt us, but once (Sheppard) got going I couldn’t run that line up there (around the outside). I’m just happy to run second. We’ve been kind of a on a down hill (slide) for the last month or so.”

The surprise of the race was Siebert, a 30-year-old asphalt convert who began competing on dirt in 2010 in the open-wheel modified division before getting his feet wet in Dirt Late Model action in ’14.

“It was a good Sunday for us,” said Siebert, who got a late start on his 2017 season because he was sidelined to recover from surgery on a broken right wrist he suffered in an incident last fall at Lucas Oil Speedway in Wheatland, Mo. “It’s a confidence booster. These things are tricky. They’re a lot tricker than the mods that we’ve run in the past. It’s just a learning curve and it feels good to be here right now.

“We were hurt for most of the year this year. We’ve been back for about 60 days and now we’re starting to get comfortable again.”