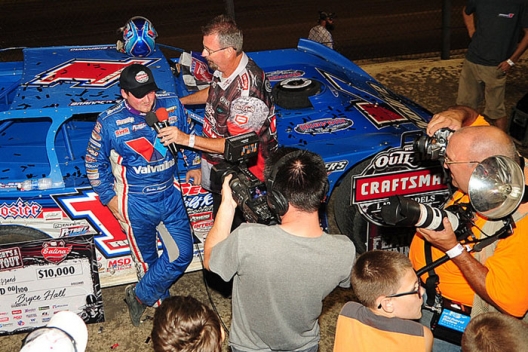 The 24-year-old star waltzed away from the pack after an early duel for the lead with Chris Madden of Gray Court, S.C., to capture his 16th victory of 2017 in Saturday night’s Bravado Wireless Green County 50 at Salina Highbanks Speedway, moving him within two victories of matching the national tour’s single-season win record.

Sheppard swapped the lead twice with Madden before gaining command for good on lap 14 of the first-ever WoO event at the steeply-pitched, 3/8-mile oval. He built a commanding edge of over 8 seconds before a lap-45 caution flag cut his final winning margin to a modest 0.764 of a second over Chase Junghans of Manhattan, Kan.

Outside polesitter Rick Eckert of York, Pa., finished third. Madden, who started on the pole and led laps 1-6 and 9-13, slipped as far back as fifth by lap 44 but took advantage of the lap-45 restart to pass Devin Moran of Dresden, Ohio, and finish fourth, leaving the sixth-starting Moran to settle for a fifth-place result.

Sheppard’s second $10,000 triumph in as many nights not only left him with an opportunity to sweep the WoO circuit’s three-race swing through the Great Plains — a tripleheader that concludes Sunday night at 81 Speedway in Park City, Kan. — but gave him a legitimate shot at the tour’s single-season win mark of 18 established last year by Josh Richards of Shinnston, W.Va., Sheppard’s predecessor behind the wheel of the Rocket Chassis house car. There are six more features on the 2017 WoO schedule for B-Shepp, who will keep the same mindset as he chases the record.

“We’re not satisfied unless we win,” said Sheppard, who won Friday night’s 50-lap WoO A-main at Lakeside Speedway in Kansas City, Kan. “We’ve got a hard-working team behind us, and if I mess up they’ve got my back and if I win the race they’ve got my back. It’s just a good group of guys and a lot of fun to work with them. I hope we can keep it going for quite a few years here.”

Sheppard didn’t take long to steer his XR1 Rocket to the front of the pack at Salina. He surged from the fourth starting spot to second by lap two and made his first pass of Madden to move in front on lap seven. Madden gained the top spot while racing through lapped traffic on lap nine, but Sheppard used the outside lane to grab the lead on lap 14 and never looked back.

Only the race’s lone caution flag on lap 45 — for a turn-four spin by the lapped Austin Siebert of Grandview, Mo. — prevented Sheppard from flashing under the checkered flag well over a straightaway ahead of Junghans for his 22nd career WoO triumph.

Sheppard was his usual low-key self in victory lane, but his crewman, Danny White, provided some perspective on the red-hot Rocket house car team’s magic-carpet ride of a 2017 campaign.

“They can say we out-budget everybody, but this car, it’s the second year on it,” White said when interviewed by WoO announcer Rick Eshelman. “It’s got like 125 races on it, we ran our motor 1,550 laps, so we push everything to the limit just like everybody else does. We just got the best wheelman there is right now.

“Everything’s just clicking. This is fun. This is the funnest season I’ve ever had,” he continued. “Right now we’re just riding a big wave. It’ll crash down at some point, but right now you just ride it and enjoy every moment you get. Yeah, maybe we don’t celebrate like some other teams, but we’ll be happy tonight and tomorrow’s a new day and another race to win. We’ll celebrate a little tonight, and we’ll be ready to win again hopefully.”

Aside from chasing the WoO win record, Sheppard also sits on the cusp of his first-ever WoO championship and the Rocket house car team’s fifth. He leads Madden by 284 points, which means he is assured the $100,000 title by simply averaging a 24th-place finish over the final six events.

“The ultimate goal when we come here is to win the race,” Sheppard said, “so as long as we win races the points and all that stuff will fall out where it’s supposed to.”

Junghans, 24, fell short of a victory in his home region, but the runner-up finish was quite satisfying to the driver who was a WoO regular in 2014, ’15 and much of ’16. Since winning his only WoO A-main on June 26, 2015, at Lernerville Speedway in Sarver, Pa., he had recorded just five top-five finishes — four during the second half of ’15 and one earlier this season (fifth on July 8 at Deer Creek Speedway in Spring Valley, Minn.) — in 74 series starts entering Saturday’s program.

Driving his father Greg’s XR1 Rocket out of the third starting spot, Junghans slipped back to fourth at the initial green flag but hung tough. He passed Eckert for third on lap six and swapped second with Madden twice during the race’s middle stages before securing the position for good on lap 34.

“We were really good,” Junghans said. “That lapped traffic, it was just hard to get around, and Sheppy got out there aways. We had that restart (on lap 45) and I was hoping I could hang with him and dive down to the bottom and slide him, but he did a good job.

“Them guys are really hard to beat this year, so we’ll take a second and move on.”

Eckert, 51, overtook Madden for third on lap 35 and stayed there to the finish. He had a scare, however, on lap 45 when he slid over the turn-four back to avoid the spinning Siebert; the wheels of Eckert’s Paul Crowl-owned Longhorn car never stopped moving and Siebert was charged with the caution, so Eckert was permitted to remain in third place.