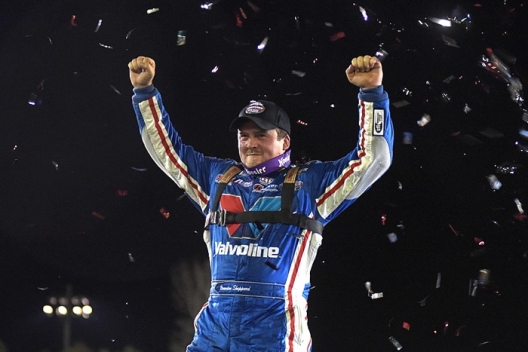 KANSAS CITY, Kan. (Sept. 22) — Brandon Sheppard and the Rocket Chassis house car team nailed their tire choice Friday night at Lakeside Speedway — and as a result, the driver from New Berlin, Ill., ran away with a $10,000 victory in the 50-lap World of Outlaws Craftsman Late Model Series feature.

Making his first-ever start at the 4/10-mile oval that last hosted the WoO tour a decade ago, the 24-year-old Sheppard advanced from the fifth starting spot to grab the lead from race-long pacesetter Brent Larson of Lake Elmo, Minn., on lap 22 and never looked back. He was never challenged once in command as he cruised to his 15th WoO triumph of 2017 and padded his already gargantuan points lead.

Shane Clanton of Zebulon, Ga., wrestled second place from Larson on lap 40 but wasn’t able to challenge Sheppard, finishing a distant 7.778 seconds behind the runaway victor.

“Putting the hard (compound) tires on it I think helped us a little bit tonight,” declared Sheppard, whose XR1 Rocket became progressively quicker as the circuits clicked off. “We were a little bit tight early, then … I think the track was a little bit hard on the soft tires, but the hard ones worked really good. Mark made all the right decisions on the car. It’s a heck of a team we’ve got here.”

Devin Moran of Dresden, Ohio, placed third after overtaking Larson for the position on lap 46. Chris Madden of Gray Court, S.C., passed Larson on the final circuit to claim a fourth-place finish after starting 10th, leaving Larson, who started from the outside pole, to settle for fifth in a race that he led from laps 1-21 driving his Arnie Ranta-owned machine.

Sheppard’s checkered flag was the 21st of his career in WoO competition and kept alive his hopes of establishing a new single-season win record on the series. With seven events remaining on the 2017 schedule, he’s within three victories of Josh Richards’s standard of 18 wins set last year.

There was little Sheppard’s rivals could do to stop him from ringing up another score at Lakeside. He came alive as the halfway mark approached, passing Clanton for third on lap 19 and Logan Margin of West Plains, Mo., for second on lap 21 before making his deciding move on Larson.

“Honestly, I needed that long green-flag run (the race’s first 23 laps went caution-free) to figure out what I was doing,” said Sheppard, whose 31st top-five finish in 38 WoO A-mains pushed his virtually insurmountable lead in the tour’s standings to 278 points over Madden. “The track was pretty tricky. The black was pretty slippery and you could really push the front tires across the track, and then there was a couple of brown streaks … if you didn’t hit those brown streaks, you were out to lunch.

“When I got to where I could get on somebody, I could pass ‘em in (turns) one and two because that brown was pretty good down on the bottom of the track and I could really bend hard and stick and then slide-job ‘em.”

Clanton, 42, and his Capital Race Car was no match for Sheppard. The winner of the only previous WoO event at Lakeside — on June 16, 2007 — bounced around the top five, moving from the fourth starting spot to second at the initial green flag before falling briefly to fourth and then swapping second place with Larson twice.

After Clanton shot by Larson for second on a lap-23 restart and then Larson returned the favor following a lap-27 caution period, Clanton finally gained the position for good with 10 circuits remaining.

“I think we had a second-place car there,” said Clanton, who raced just four days after his wife, Michelle, gave birth to the couple’s first daughter, Hailee, on Monday in Georgia. “Brandon was a little bit better in lapped traffic and passing the leaders. We gotta work on the car a little bit more, but we’re headed in the right direction.”

Moran, 23, started sixth in Tye Twarog’s XR1 Rocket but had to rally after losing a handful of positions early in the race.

“We definitely had to fight for that one,” said Moran, who competed on his Hall of Fame father Donnie’s 55th birthday. “I got shuffled back to eighth or ninth on that start and kind of was just climbing the rest of the way.

“B-Shepp and Team Rocket were definitely on a rail there. I didn’t even see them there at the end.”

Martin, who started from the pole position and briefly grabbed second place from Clanton on lap 15, brought out the first yellow flag on lap 23 when he spun around in turn two while battling for fourth with Tyler Erb of New Waverly, Texas. Martin, who won a Lucas Oil MLRA-sanctioned feature at Lakeside on Sept. 1, rallied from the rear to salvage an eighth-place finish.

Erb, meanwhile, triggered caution conditions on lap 27 when he slowed with a flat right-rear tire while holding sixth place. The 20-year-old went on to finish 11th, dropping him out of a tie for fifth place in the WoO points standings with sixth-place finisher Rick Eckert of York, Pa.

The WoO continues its Great Plains weekend with stops on Saturday night at Salina (Okla.) Highbanks Speedway and Sunday evening at 81 Speedway in Park City, Kan.