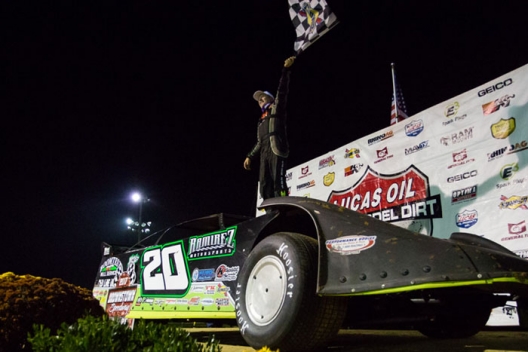 “We tired up expecting no cautions because we’ve got the greatest drivers in the country here with us this weekend,” Owens said after the race. “We didn’t expect any cautions actually. We kind of got it right there.”

As Owens charged to the lead, English and Gilpin battled for the second-place spot in the early running, with Gilpin pulling away by the fifth lap. As the frontrunners approached the rear of the field on lap 11, Gilpin began reeling in the race leader, but was never able to challenge Owens for the lead.

Working his way through lapped traffic at the halfway mark, Owens stretched his lead late-race, scoring his fourth Lucas Oil Series victory of the season.

“There was a couple of good lanes and everybody was in them,” Owens said. “I felt like we had a decent car to be able to go through the middle of those guys. It was really tough. There toward the end of the race it was like everybody got sort of the same speed. So it really made traffic difficult.”

“I was hoping that lapped traffic would slow him up,” Gilpin said. “Jimmy (Owens) was really good. I think he had a little harder right-rear tire on than we did. He got away from us. But we’re tickled with second.

“To run second to Jimmy Owens … he’s my hero. I’ve kind of had a similar career as him, UMP mods and making the transition to Late Models. I just can’t thank (car owner) Jim Beeman enough and all the guys on board. It’s a good test for tomorrow. This is awesome. Second in a Lucas race, I’m pretty pumped.”

While McCreadie was pleased with a podium finish, he’s hoping to improve for Saturday’s $15,000-to-win Jackson 100.

“We weren’t as balanced as I’d like to be,” McCreadie said. “I just kind of got to get this car in the position that I like it. But all in all, to go out here and come out with a third with the talent that’s in this pit area is pretty cool. We’re happy.”

Notes: Owens notched his 58th career Lucas Oil Series victory. He is a former Jackson 100 champion, winning Brownstown’s annual event back in 2012. … The 30-lap feature ran caution-free. … Friday’s race honored long-time Brownstown Late Model racer Steve Barnett, who announced his retirement earlier this year. … Runner-up finisher Devin Gilpin was the winner of last Saturday’s weekly program at Brownstown. He made his return after suffering a broken collarbone back in August. … Fast qualifier and eighth-place finisher Tanner English has captured multiple victories at Brownstown this year, including wins on the MARS East and Ultimate Battle of the Bluegrass tours. … Third-place finisher Tim McCreadie is also a former Jackson 100 champion, winning the race back in 2008.