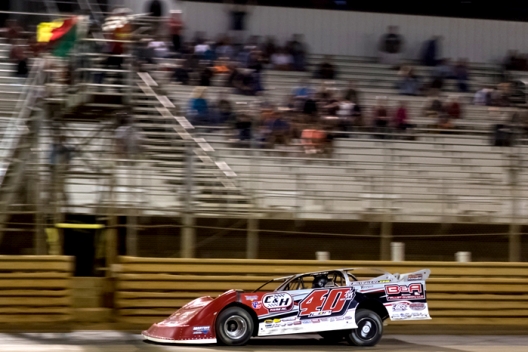 JAMAICA, Va. — Ross Bailes of Clover, S.C., put on a clinic, leading flag-to-flag to capture the $20,000 Fastrak World Championship Saturday at Virginia Motor Speedway. Bailes took the lead at the drop of the green flag and then held off a hard charging Chris Ferguson of Mt. Holly, N.C., to claim a .985-second victory.

“If you don’t have a Barry Wright ICON race car, you need to get you one. This car was flawless all weekend,” said Bailes. “I can’t thank Barry Wright and the crew enough for putting such a great car under me.”

Finishing behind Ferguson in third was Ryan Montgomery of Fairmont, W.Va., Walker Arthur of Forrest, Va., and Tyler Bare of Rockbridge Baths, Va.

Bailes and Corey Almond led the 24-car field to the green with Bailes jumping to the lead out of turn two and Jacob Hawkins following to second. The night ended early for the second-running Hawkins, who drew the first caution on lap three, due to a blown engine.

On the restart Bailes pulled away with Ryan Montgomery working his way to second. By lap 17, Bailes was working traffic and on the following lap split two lapped cars to make it three-wide in turn one as he had Montgomery closing. On a lap-19 restart, Almond spun in front of the field, collecting Thomas Robinson and Justin Williams. The accident resulted in a red flag.

On the ensuing restart, an eight-car pileup caused yet another red flag and thinning the field out. As the race finally went back green, Bailes pulled away from the field while Ferguson began to pick off several positions. Over the next three laps he made his way to third. By the halfway mark of the 60-lapper, Bailes had stretched his lead to a little over four seconds. On lap 38 Ferguson worked inside Montgomery in turn three to take over the second spot.

Catching traffic again on lap 42, Bailes came upon a side-by-side battle. He patiently worked his way around while extending his lead. With the laps winding down, the driver on the move was Tyler Bare who had been caught up in the big wreck on lap 19.

By lap 48, Bare had worked his way back to sixth. On lap 52, Walker Arthur worked his way into fourth as caution came out for Daryl Charlier who slowed in turn two. The cautioned erased the lead and  set up an eight-lap shootout for the $20,000 top prize.

On the restart Ferguson tried to stay with the leader, but Bailes was able to stretch his lead to four car lengths. Though Ferguson was able to cut the deficit in half with just two laps remaining, he wasn’t able to mount a challenge for the lead.

Notes: The event attracted a record car count for Virginia Motor Speedway of 71 entrants. … The event's presenting sponsor is James River Equipment. ... Jacob Hawkins of Fairmont, W.Va., held off Chris Arnold of Matoaca, Va., for his first Southeast Dirt Modified Series win and the $3,000 check. … Thirteen drivers finished the race, with eight of the 24 starters completing all 60 laps. ... Hawkins, winner of the third heat, completed just two circuits, before retiring due to an expired engine. ... Eight drivers retired after only 19 laps. ... This was the richest race of the season for the series. … Justin Williams of Shipman, Va., won Friday’s weekend opener. … There were 37 entrants in Friday’s invitation-only, $5,000-to-win World Challenge.