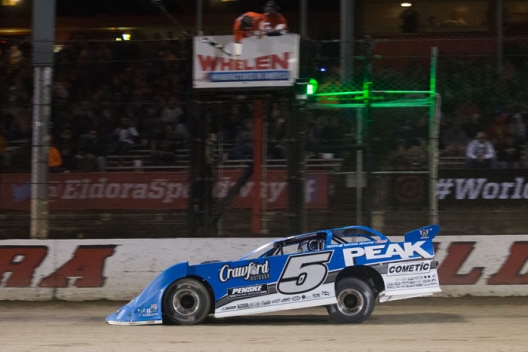 ROSSBURG, Ohio — Using an all-too-familiar line around Eldora Speedway, Don O’Neal rolled to victory in Friday’s first World 100 preliminary feature. From the pole, O’Neal of Martinsville, Ind., blasted into the lead and cruised to a .770-second victory over Tim McCreadie of Watertown, N.Y., on a night when intermittent rain showers caused a 90-minute delay in the program.

O’Neal worked his way around the famed half-mile oval with his blue and white Clint Bowyer Racing mount snugged up against the outside wall. His flag-to-flag victory was slowed only by a lone caution, which flew on lap 10 for Mason Zeigler’s spin in turn three.

Seventh-starting Gregg Satterlee of Indiana, Pa., claimed third for his best finish of the weekend, while Mike Marlar of Winfield, Tenn., finished fourth. Shane Clanton of Zebulon, Ga., ran in the top three for much of the race before slipping to fifth in the waning laps.

“We gambled on tires … went a little softer than everybody else,” O’Neal said.

O’Neal, who is seeking his first-ever World 100 victory, knew that getting the lead at the start was key.

“I knew if I could (get the lead) and stay on the top … but even when we got in lapped traffic, cutting underneath of (lapped cars), we was still good,” he said. “Hopefully we’re going to be standing here tomorrow night. It’d mean the world to me.”

McCreadie, who started alongside O’Neal on the front row, gave chase throughout, but could never get to O’Neal’s bumper. Even after the only caution, O’Neal was able to pull back to a comfortable advantage.

“(O’Neal) did a great job,” McCreadie said. “He was softer on his right-rear than we were. We didn’t need any yellows. We kind of needed it to run. Hats off to them guys.”

McCreadie said that after making a last-minute change in the staging line, he was pleased with his performance.

“I changed at the last minute in line because I thought it would be better,” he said. “I’m happy with the result. We’ll just work on some things and hopefully make it a little bit better for tomorrow.”

While O’Neal and McCreadie were never really pressured out front, Satterlee had to scrap throughout the 25-lapper to get to the podium. He was running fifth when the caution waved for Zeigler. On the restart he was shuffled back to seventh, from which point he had to battle back into the top five. Satterlee finally tracked down Marlar and Clanton to grab the third spot.

“We had a really good car,” Satterlee said. “It’s a big rebound from last night. We kind of just started off the night really bad and didn’t have a real good balance on the race car. But we tried a few things in the feature last night and got a little better and got a little further tonight. Top-three, that should put us in pretty good position for points tomorrow, hopefully."

The difference between winning and losing the first heat boiled down to the initial green flag for Jacob Hawkins. “I was worried about that start,” said Hawkins, who sat on the outside pole for the first prelim after a nearly two-hour rain delay. “I knew we needed to get (polesitter Scott James) there. Thankfully we got it done.” … It’s likely that no one will make a bigger opening-lap advance than Jason Jameson did in the first heat when a jumble up front allowed him to swoop from the 10th starting spot to third place in a single circuit. He stayed in that spot to transfer to the feature. … With the track still coming around from the rain, Heat 2 winner Shane Clanton was glad he started on the pole. “Man, this place is supersonic right now,” he said. “Hopefully it’ll slow down a little bit here and we’ll be able to race on it.” … Jared Miley scored a Heat 3 victory in his debut weekend of racing at Eldora, but the new father (his wife gave birth to the couple’s first child just a couple weeks ago) modestly stated he “had a fortunate heat race (starting on the pole) and we took advantage of it.” … Heat 4 victor Tim McCreadie conceded that the tacky surface wasn’t the slick condition that his Longhorn car likes, so he had a succinct analysis of his flag-to-flag score off the pole: “The invert fixed my race car.” … Heat 5 winner Don O’Neal offered a little friendly dig toward his teenage son Hudson after matching his boy’s heat-race triumph. “I think I had to work for mine a little harder than he did,” smiled O’Neal, who ran door-to-door with Kyle Bronson for the lead before securing the checkered flag. ... Chase Junghans limped into the pit area four laps into the fifth heat with fluid trailing behind his machine.

Polesitter Kyle Bronson edged ahead of fellow front row starter Timothy Culp to take an early lead. As the early laps clicked off, third-starting Don O’Neal set his sights on Culp, charging toward the second-place spot. A yellow flag waved on lap four when a smoking Chase Junghans slowed on the frontstretch. Second-running Culp spun in turns three and four to draw another caution on the ensuing restart. Working around the high side, O’Neal edged ahead of Bronson on the restart to lead the fifth lap. With the top two cars stretching their lead over the field, O’Neal won the final odd heat. Bronson finished second, with Shanon Buckingham and James Rice transferring to the feature.

Polesitter Tim McCreadie shot to the lead at the drop of the green flag, with third-starting Earl Pearson Jr. slipping ahead of Chris Ferguson to run in second. As McCreadie went unchallenged in the early running, fourth-starting Billy Moyer attempted to reel in Ferguson for the third-place spot. McCreadie held a half a straightaway lead at lap five, with the top four cars distancing themselves from the field. McCreadie picked up the heat race win, with Pearson finishing runner-up. Ferguson ran third, with Moyer grabbing the fourth and final transfer spot.

A yellow flag waved on the opening lap when fifth-starting Cody Mahoney got into the frontstretch wall, heavily damaging his No. 4 machine. Polesitter Jared Miley took an early lead, with fourth-starting Mike Marlar powering past Connor Meade down the backstretch to take over the third-place spot. Miley held his lead through the halfway mark, with Marlar pulling ahead of Jeff Babcock to run in second on lap five. Miley won the heat, with Marlar, Babcock and Meade transferring the the feature.

A yellow flag flew on the opening lap when Gordy Gundaker spun on the backstretch. Polesitter Shane Clanton shot to the front of the field as the race went free, as Kent Robinson and Brandon Sheppard battled for the third-place spot. Second-running Gregg Satterlee began closing in on Clanton at the halfway point, with the top-two cars distancing themselves from there best of the field. Clanton held off Satterlee to win the heat, with Robinson edging ahead of Sheppard to finish third.

Outside polesitter Jacob Hawkins charged to the lead at the drop of the green flag, as 10th-starting Jason Jameson shot into third on the opening lap. Third-starting Chris Madden began reeling in Hawkins at the halfway mark, with Jameson in tow. Hawkins picked up the heat race win, with Madden finishing runner-up. Jameson and Dale McDowell ran third and fourth to transfer to the feature.

Unexpected sprinkles that turned into a rain shower hit the track shortly after time trials about 8:30 or so. Rain fell steadily nearly 30 minutes before relenting; pack trucks were working the wet surface track by 9 p.m.

Jonathan Davenport of Blairsville, Ga., was quickest in the 105-car qualifying session, turning a lap of 15.222 seconds in his G.R. Smith-owned XR1 Rocket.

When Davenport stood on the stage prior to opening ceremonies to accept his fast-time honors, he looked up and mentioned the light rain that had begun moments earlier.

“We’ve got a little ‘traction’ falling from the sky so the first heat might be a slippery one,” said Davenport, who will start fourth in the opening prelim.

Among the drivers who slapped Eldora’s treacherous outside wall during time trials was Thursday-night feature winner Brandon Overton, who limped into the pit area with deck and right-front suspension damage after sliding into the concrete in turn one.

Other wall-bangers included Devin Moran (pancaked the right side), Joey Coulter and Nick Latham, who slammed the turn-one guardrail driving his backup car after his primary machine was sidelined by engine trouble on Thursday.

Five drivers — Josh Richards, Jason Jameson, Michael Page, Casey Roberts and Vic Hill — received penalties for taking an extra circuit during hot laps that required them to use the slower of their two qualifying times. Richards took a big hit as a result, dropping from ninth in the final qualifying order to 40th.

Friday began with overcast skies and some light drizzle in areas around Eldora Speedway, but the conditions have turned partly sunny with the temperature nearing 70 as the day has gone on to usher in a comfortable evening. … Dale McDowell of Chickamauga, Ga., had his new Sweet-Bloomquist car — a machine he debuted with a runner-up finish in Sunday night’s ALMS-sanctioned Baltes Classic at Eldora — sidelined by right-side frame damage it sustained when he couldn’t avoid a lapped car that came off the wall in front of him as he led a Thursday-night heat. He is now driving the vehicle he ran to a sixth-place finish in June’s Dream. … Steve Francis of Bowling Green, Ky., is sporting a bandage above his right eye after suffering a cut earlier this afternoon while working on his car’s lower control arm. He had a rod slip and hit him with enough force, he said, “to almost knock me out,” but he was able to stop the bleeding without needing stitches. … Chris Ferguson of Mount Holly, N.C., had to repair the rear deck and some suspension pieces after being involved in a feature accident, but he’s upbeat nonetheless. “I’m not at the stage I was in June (during the Dream) yet — I don’t want to go home,” he said. “We’re light years ahead of where we were here in June.” … Eddie Carrier Jr. of Salt Rock, W.Va., said he fell from a pole position start to a 10th-place finish in Thursday night’s first feature because he car was just “too tight” right from the initial green flag. … Donald McIntosh of Dawsonville, Ga., knocked himself from contention for a transfer spot in a Thursday heat after slapping the outside, damaging the deck and a lower control arm on his Blount Motorsports machine. “The car was awesome,” he said. “But to be fast here you gotta be close to over your head — and unfortunately, I went over my head.” … Jared Miley of Pittsburgh, Pa., ended the first night of action atop the Shane Unger Memorial Rookie of the Race standings with 856 points, leading Brent Larson of Lake Elmo, Minn. (812) and Tony Jackson Jr. of Lebanon, Mo. (808). … During Friday night’s drivers’ meeting Eldora’s Larry Boos reiterated that no wheel covers or mud plugs are allowed on the left side of cars. The rule led to the disqualification from a heat transfer spot of Mosheim, Tenn.’s Vic Hill; officials were informed that Hill had a wheel cover on his machine and checked video of his heat to confirm the fact. … Tanner English of Benton, Ky., had his second career start at Eldora come to an early end due to terminal engine trouble on Thursday.