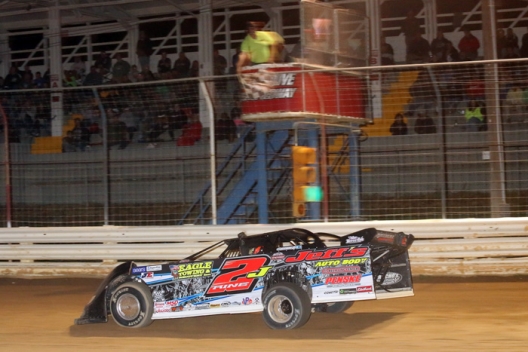 SELINSGROVE, Pa. (Sept. 3) — As soon as Jeff Rine of Danville, Pa., drew the outside pole starting position for Sunday night’s 40-lap World of Outlaws Craftsman Late Model Series-sanctioned National Open at Selinsgrove Speedway, he had a pretty good grasp of what he needed to do if he hoped to capture his long-awaited first-ever triumph on the national tour.

“I kind of thought the race was gonna be won the first lap getting into (turn) one and I was gonna do whatever I could to get in there (first),” Rine related, well aware that the track surface was left fast and narrow by the multiple bursts of rain showers which struck during the morning and early-afternoon hours.

And so the 39-year-old driver “run in there wide-open” when the initial green flag was displayed, surged ahead of polesitter Rick Eckert of York, Pa., and never looked back en route to a wire-to-wire victory worth $8,000 that immediately became the most significant triumph of his career.

“Man,” Rine said in victory lane after climbing out of his Jeff and Kathy Kurtz-owned Longhorn Chassis, “this is just freakin’ awesome.”

A 12-time Selinsgrove Dirt Late Model champion who gave up a shot at his 11th consecutive title this season in order to hop around to different tracks on Saturday nights, Rine survived a brief late-race challenge from WoO points leader Brandon Sheppard of New Berlin, Ill., before beating Chris Madden of Gray Court, S.C., to the finish line by 1.354 seconds.

Rine’s triumph made him a winner of Selinsgrove’s National Open for the fifth time in his career, but it was his WoO breakthrough that meant the most to him. He’s been pursuing a national-level win with a handful of annual starts over the past decade and had come close before — his best previous finish in a national tour event was third in Selinsgrove’s 2013 WoO feature — but putting together the perfect mix of fortune and speed proved elusive.

Everything finally clicked in his home track’s holiday weekend WoO program. Rine made the feature redraw, grabbed the second starting spot and ran a flawless race at the front of the pack, turning back the only serious pressure he received when Sheppard pulled close enough to bid for the lead exiting turn four on lap 28.

Rine was able to maintain command by dulling Sheppard’s momentum off the corner and then running a slightly higher line around the half-mile oval for the remainder of the distance.

“I was getting signals (from his father and other crewmen) and they were telling me he was right there,” Rine said of Sheppard, who vaulted his Rocket Chassis house car from the fourth starting spot to second on the race’s opening lap. “He moved me up a little bit and I think we might have got a little better.”

Rine didn’t have to deal with Sheppard any further, however, because Sheppard slowed with a flat right-rear tire on lap 29 to bring out a caution flag. Sheppard later spun around after a lap-33 scrape with Andy Haus of Hamburg, Pa., while battling for 10th place, ending his night but not shrinking his already enormous points lead because the possibility of difficult, high-speed track conditions due to the rain led WoO officials to give only show-up points (60 to each entrant) for the event.

When the race restarted on lap 29, Rine shifted from his mostly conservative approach (“I was trying not to spin these tires … I was trying to save them”) to a let-it-all-hang-out strategy for the stretch run.

“I thought, Man, I gotta run the living snot out of this thing,” Rine said of the final 11 circuits. “I want to win this race.”

With Madden unable to mount a challenge, Rine cruised to his 11th overall victory of a very successful and enjoyable 2017 campaign. He thanked his car owners — for whom he’s been driving for 16 years — for making the special evening possible and acknowledged the Selinsgrove fans who might not like him due to his winning ways at the facility.

“It don’t get much better than that,” said Rine, who recorded his track-best 107th career win at Selinsgrove. “This is where we grew up racing. I get an awful lot of boos here on a Saturday night, but I don’t care how many of you guys boo me tonight. This is awesome.”

Madden, 42, made a point during the post-race ceremonies to shake hands with Rine, a fellow Longhorn Race Car campaigner who spoke with Madden in the pit area before the night’s action began.

“Congratulations to Jeff and his guys,” said Madden, who tallied his fifth top-five finish in his last six WoO starts. “It’s awesome for them guys to win a race like this.”

Madden commented that he felt fortunate to end up with second-place money. He reached third place from the sixth starting spot by lap 14, but he then ceded the spot to Eckert on lap 26 when he slipped high off turn four and only regained it when Eckert stopped on lap 28 with a broken driveshaft. It took Sheppard losing a tire on lap 29 to move Madden into the runner-up slot.

“We missed it a little bit tonight,” Madden said. “It just got a little choppy on us and we weren’t prepared for that, but we did the best we could do.”

The 22-year-old Moran — like Madden, a first-time Selinsgrove visitor — started and finished third in Tye Twarog’s XR1 Rocket but slipped back as far as fifth. He credited Selinsgrove’s track crew for working to get the show in after the earlier rain.

“The cushion got so thick you couldn’t really move it up the racetrack,” said Moran, who registered his sixth consecutive WoO top-10 finish. “But it was just one of them deals … I didn’t even think we would be able to race tonight, so props to them guys for being able to put this show on. I’m telling you, they did a good job with what they had.”

Notes: Coleby Frye of Dover, Pa., was the feature’s biggest mover, climbing from the 20th starting spot to finish sixth. He was put behind early in the night when he failed to log a qualifying lap because his Larry Baer-owned car’s nose folded under. … The program was scheduled to start at 7 p.m., but the afternoon rain caused a delay that ended when race cars rolled onto the speedway to help pack it in shortly after 8 p.m. and WoO hot laps were green-flagged at 8:50 p.m. The feature field hit the track to begin pace laps at 10:54 p.m. … If the show had been called off before noon as rain was falling, several teams — including those of Sheppard, Moran, Tyler Erb and Eric Wells — were primed to make the haul to Tyler County Speedway in Middlebourne, W.Va., to enter Sunday night’s Lucas Oil Late Model Dirt Series-sanctioned Hillbilly 100. … The World of Outlaws circuit visited Selinsgrove for the fifth consecutive year to contest the track’s 19th annual National Open.