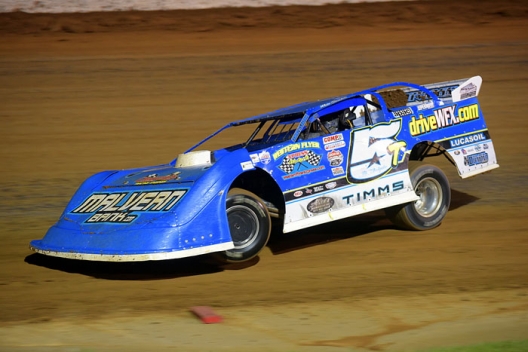 WHEATLAND, Mo. — After a battle of attrition, Randy Timms was the man standing in victory lane at the conclusion of Saturday's wild Larry Phillips Memorial at Lucas Oil Speedway.

"Apparently it took some misfortune for my teammate,” the Wheatland, Okla., driver said after his first career Lucas Oil Midwest LateModel Racing Association vicotry, “but we'll take it any way we can get it.”

Timms started 12th and, unlike many other contenders, stayed out of trouble in the 50-lapper. This after teammate Jesse Stovall was on the cusp of victory, only to experience heartbreak in the waning laps.

Driving a car owned by Oklahoma racer Shannon Scott for the first time, Stovall had a sizeable lead when he slowed suddenly and pulled into the infield with a broken rear end after completing 47 laps.

"I didn't even know Jesse left the track," Timms said. "I thought we were racing for second. When we came off four and I saw (a lapped car) in front of me, I looked up and was like, ‘Holy crap, did we just win this?' I was rolling around and saw (No.) 5 on the scoreboard. I was like, ‘What happened?’ ”

When Stovall broke, Billy Moyer Jr., inherited the lead coming to the white flag. But Moyer slid too high in turn two on the final lap and Timms drove past. Rodney Sanders, after starting 24th, also got past Moyer and finished second. Moyer wound up third with MLRA points leader Terry Phillips finishing fourth.

"When Stovall broke, it made me drive a little harder I guess and I was better. The lap I messed up, I kind of went in too soft. It's all my fault. If I'd have run it in there like the lap Stovall broke, I'd have been fine."

The eventful feature saw only 10 of the 24 starters still running at the finish.

Payton Looney used a strong start from his outside front row starting position to beat J.C. Wyman take the lead on lap one. The 23-year-old, in his first race since rebuilding his car from an accident a week earlier, set a blistering pace in opening a half-straightaway lead in the early going.

Stovall got past Wyman and into second by lap 12 and began to reel in Looney, who had to battle lapped traffic. When Looney got too high and into the cushion in turn two on lap 18, Stovall pounced and grabbed the lead.

Those two, along with third-place Logan Martin, put on a thrilling battle over the next three laps until the race's third caution bunched the field.

Looney and Martin made contact on lap 24, coming out of turn four, with Martin getting the worst end. A winner of his first MLRA feature on Friday at Lakeside Speedway, Martin drove to the pits.

Just as Stovall seemed to open a comfortable lead, Looney rejuvenated his chances and was closing in. But Looney again slid high, into the loose dirt in turn two, and popped the wall to end his night on lap 31.

Stovall charged to a comfortable lead over Timms when the race's eighth caution, on lap 39, brought Timms, Moyer Jr., and Sanders into contention.

Stovall, who returned this week after missing some races because of a concussion suffered in a July accident at I-80 Speedway, appeared to be a clear winner. But it was not to be.