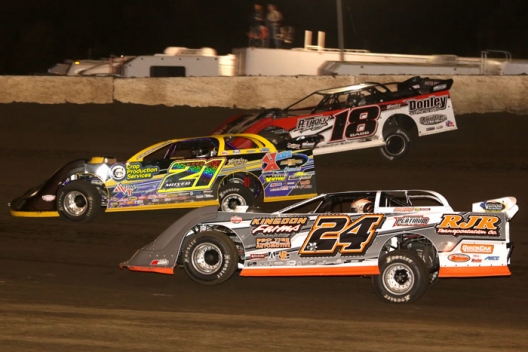 Jeff Hall/hallracingphotos.smugmug.com
Shannon Babb (18) battles with Billy Moyer (21) and Ryan Unzicker (24).
What won the race: Turning back early challenges from Billy Moyer and a mid-race charge by Ryan Unzicker, polesitter Shannon Babb of Moweaqua, Ill., pulled away late as he topped third-starting Jason Feger of Bloomington, Ill., for a $5,000 UMP DIRTcar victory at Farmer City Raceway. Bobby Pierce of Oakwood, Ill., finished third.
Quotable: “Those guys were on a little bit harder tire that I was and some times it comes and goes,” Babb said. “The track polished up pretty good. We were able to get some momentum going and we were able to pull away. They did a real good job of getting this place prepared. They had it really sticky early in the night; the heat races were really sticky. But it polished up. There wasn’t a hole in the racetrack. It polished up nice and you could race all over it.”
Key notes: Babb notched his fifth victory of the 2017 season, his second at Farmer City. He scored a $3,000 MARS victory at the racetrack back in May. … Jason Feger rallied from eighth after losing several positions while running fourth early. He slipped off the backstretch trying to avoid contact with Billy Moyer and then was pinched up near the turn-four wall by Bobby Pierce as he tried to gather his machine back underneath him. ... Ryan Unzicker nosed ahead of Babb briefly down the backstretch near the the halfway mark of the 40-lapper, but he did not officially lead the lap. ... The Labor Day weekend special was the final event on Farmer City’s 2017 slate. … Tim McCreadie piloted a Tim Lance-owned Longhorn Chassis. … After starting on the front row, Moyer ran in the top five for most of the race but slowed and gave up the spot with less than 10 laps remaining. he finished 16th. ... Home-state driver Allen Weisser won the Crate Late Model feature.
On the move: Bobby Pierce charged from 11th to finish third.
Winner's sponsors: Babb’s Rocket Chassis is powered by a mments Racing Engine and sponsored by Petroff Towing, Donley Trucking, CJI Piping and Fabricating, Hunting for Hope and Kuebler Ultra Oil.
Points chase: Ryan Unzicker of El Paso, Ill., won the 2017 Farmer City points title over McKay Wenger and Mike Spatola.
Car count: 23
Fast qualifier: Shannon Babb
Time: 12.45 seconds
Polesitter: Shannon Babb
Heat race winners: Shannon Babb, Billy Moyer, Jason Feger
Editor's note: Results and race details are unofficial.