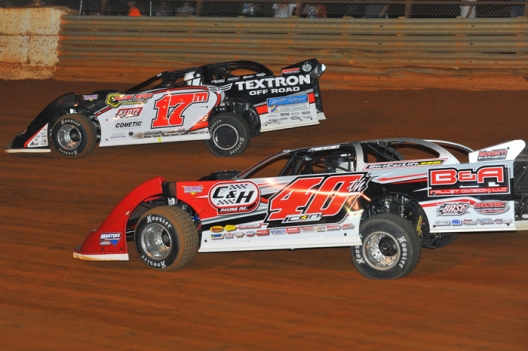 BULLS GAP, Tenn. (Aug. 17) — Dale McDowell has made a lot of laps around Volunteer Speedway. When the Chickamauga, Ga., driver finished third in the Schaeffer Oil Spring Nationals Scott Sexton Memorial at the high-banked 4/10-mile track back on April 28, he knew that this wasn’t the same ol’ Bulls Gap oval he’d grown accustomed to.

“The race track’s got a little different characteristic and some of the things that used to not work here was obviously working ‘cause I could see the guys and (they were) aggressive,” said McDowell after that spring event.

It’s a safe bet the veteran driver took note. When he returned for Thursday’s 13th annual Scorcher, McDowell was elbows up from the get-go. McDowell came out on top of a thrilling heat race duel with Brandon Overton of Evans, Ga., to earn the pole for the main event, which he parlayed into a 50-lap flag-to-flag victory.

While he led every lap in collecting the $10,000 top prize, it was anything but a Sunday drive. Dogged lap after lap by a host of challengers, McDowell had no choice but to be the aggressor, a lesson he learned back in April, and a necessity on Thursday in part due to a race car that was a tick on the tight side.

McDowell had to fend off the advances of both Ross Bailes of Clover, S.C., and Casey Roberts of Toccoa, Ga., before finally taking the checkered flag a half second in front of Bailes, who was making his debut in the Barry Wright Race Cars house car. Vic Hill of Mosheim, Tenn., advanced from seventh to finish third, while Roberts settled for fourth after starting on the front row. Dennis Franklin of Gaffney, S.C., marched from 10th to finish fifth.

“The last time we were here, it had rained, so the race track was wet and fast,” said McDowell. “Really and truly, tonight, with this particular car, I was tight. I was tight on entrance and I was tight on exit, so I really had to drive it about like I did last time, and it’s just really hard. But that’s where our sport has gone.

“Now, all of us older guys that used to ride and wait ’til the end of the race … you may still have that a little bit in 100-lappers when you go places … but when you come to these race tracks where you can be aggressive, you definitely have to just get up on the wheel and be aggressive. Because these young guys, the guys who have started in the last four, five, six, seven years, who have started rising and winning these races, that’s their driving style. It’s wide open and attack it.

If McDowell had an ill-handling car, it was hardly noticeable. Choosing to start on the outside of the front row, he pulled ahead at the start, dragging the fourth-starting Bailes along with him on the high side. With the first 20 laps clicking off without a caution, Bailes held the runner-up spot until the leaders began racing though lapped traffic. Roberts briefly took the second spot, but Bailes regained it on a lap-22 restart following a second caution.

Despite a wild battle inside the top five between Bailes, Roberts, Overton and Mike Marlar, Bailes managed to hang on to the position the rest of the way. He felt like he may have had a little more, but he ran out of laps sooner than expected.

“I thought the race was 60 laps,” said Bailes. “I saw 45 on the board and I was like, well, I better go now. The next thing I know the white flag was coming out. So I don’t know if they cut it short, or if it was 50 the whole time and I just didn’t know.

“I can’t thank Barry Wright and Lance (Wright) and Mikie and Ralphie and all those guys enough. Ronnie McCarter, this is his motor here, so I gotta thank him. I have to thank all my guys for coming and all the support they give me. Billy Hicks, you know I was driving for him and he let me drive this car. I gotta thank every body involved … I really don’t know all the sponsors yet, but I’m gonna work on it.”

Hill’s podium finish came after lingering around the top five throughout the race. While he managed to pass a couple cars, he was also in prime position to take advantage when both Overton and Marlar made unexpected exits. He used a slider on Roberts as they raced off turn four to grab the third spot with just three laps remaining.

“I went back as far as 10th and ended up third. That was just good hard racing,” said Hill. “It was a good night. We worked our butts off on that car. It was a fun night and I really enjoyed it.”

Notes: During his back-and-fourth battle with overall fast qualifier Brandon Overton in the first heat race, McDowell broke a four-link rod on the right side of his Sweet-Bloomquist car. “Brandon was a little better than I was. I was just able to hold him off there,” said McDowell. “We actually broke a right rear four-link rod in the heat, so we thought that was all of our problems. (The car) was very, very tight. We’ve got a little bit of work to do, as odd as that may sound." … McDowell won by .484 seconds over Bailes. ... Eleven cars finished the main event. ... The race was slowed by four cautions: lap 20, lap 22, lap 31 and lap 37. Each of the first three involved a single car, while the final caution was the result of contact between Jimmy Owens and Donald McIntosh, who were running sixth and seventh. ... The event was co-sanctioned by the Ultimate Southeast Series and its sister series, the Ultimate Battle of the Bluegrass series. … Both Jimmy Owens and Mike Marlar were hustling to get loaded up and head to Batesville, Ark., for this weekend’s Lucas Oil-sanctioned Topless 100. ... Marlar pulled off during the caution on lap 37 … McDowell is not planning to attend the Topless 100.