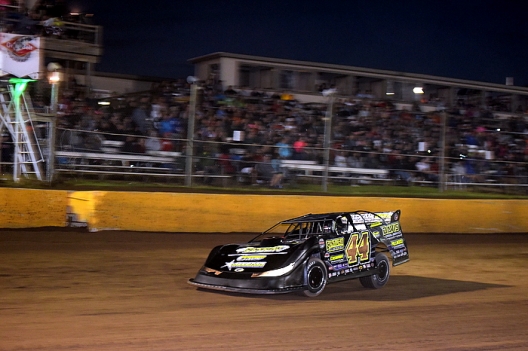 As a result, Madden regained command on lap 28, pulled away following a restart that circuit and emerged victorious in the postponed event that began a night-time doubleheader to kick off the 30th annual USA Nationals.

Madden, 42, of Gray Court, S.C., crossed the finish line with a 1.949-second advantage over Billy Moyer of Batesville, Ark., who overtook New Berlin, Ill.’s Sheppard for the runner-up spot during the green-white-checkered conclusion to the A-main. The 10th-starting Sheppard settled for a third place finish after making a stirring charge through the third-mile oval’s ample cushion that briefly saw him nose ahead to lead lap 27.

Frank Heckenast Jr. of Frankfort, Ill., finished fourth — his second top-five run in the last three WoO A-mains after registering none in the first 27 events — after reaching second place on lap three and racing in the position for much of the distance. The feature’s sixth starter had a chance to grab the lead on lap 14 when Madden pushed up the track in turn two but couldn’t complete a pass.

Madden’s $6,000 victory came in his first visit to Cedar Lake since 2009 when he finished fifth in the 100-lap USA Nationals headliner after gaining entry to the starting field thanks to a fan provisional. He started from the pole position in his Longhorn car and maintained firm control for most the race on a track surface that was heavy and fast from Thursday rain and another short shower late Friday afternoon, but the 24-year-old Sheppard made him sweat with the finish in sight.

While most of the race’s field opted to stay on the low side of the track to avoid the thick cushion, Sheppard tossed his Rocket Chassis house car around the extreme outside to march forward. He was fifth when a caution flag flew on lap 20 and proceeded to mount a furious rally, vaulting past Bloomquist for fourth (lap 21), Heckenast for third (lap 22) and Moyer for second (lap 24) before squeezing between Madden and the outside wall off turn four to lead lap 27.

Madden stepped on the gas, however, and was back in command as lap 28 was scored. Rick Eckert of York, Pa., slowed moments later to bring out the race’s fifth and final caution flag and Madden dominated the restart, gliding away from the pack as Sheppard was left in an ultimately unsuccessful battle for second with Moyer.

“I didn’t want to go up there at all,” Madden said of the unruly cushion, “but when I saw (Sheppard) I knew I was gonna have to move up a little bit.”

Sheppard, the national tour’s runaway points leader, made a gallant bid for his 13th WoO victory of 2017 but couldn’t quite seal the deal.

“I just had to pack my (outside) line in under the cautions,” said Sheppard, who lost his brakes following the final restart. “It was just a little bit too treacherous up there. I got to (Madden) one time there, but every lap it would get more treacherous up top. I had to move down in (turns) three and four the longer the green flag runs went.

“From where we started and how we heat-raced, we’ll take it.”

Drivers who brought out the race’s five caution flags were Jimmy Mars of Menomonie, Wis. (right-rear damage on lap three); Chub Frank of Bear Lake, Pa. (stopped on the lap-three restart); Tyler Erb of New Waverly, Texas (stopped in turn one on lap 17); Earl Pearson Jr. of Jacksonville, Fla. (slowed in Larry Moring’s car on lap 20); and Eckert, who pitted and returned after slowing on lap 28.

After the race ended just before 9:30 p.m., the racetrack was reconditioned as teams prepared for the second half of Friday’s doubleheader: the regularly-scheduled USA Nationals qualifying program of time trials and 15-lap heat races.

Brian Shirley dominated the action, cruising to victory over Billy Moyer. Morgan Bagley finished third while Ricky Weiss grabbed the final transfer spot with a paint-trading pass of Brent Larson through turns three and four. Larson took exception to Weiss’s power move and cut across the nose of Weiss’s car in turn two after the checkered flag; officials disqualified Larson for the rest of the preliminary program for his action.

Chris Madden backed up his fast-time honors with a wire-to-wire win over Scott Bloomquist, who finished 0.984 of a second behind the victor. Tyler Erb finished third after slipping underneath Don O’Neal off turn four on lap five. A caution flag flew on the opening lap when Kent Robinson bicycled into turn one; his car nearly flipped before slamming down on all four wheels in the thick cushion. A second caution was needed on the ensuing restart for a turn-two scramble that left Matt Furman and Nick Anvelink spun out.

Bobby Pierce led all the way, but he had to hold off a late-race challenge from Earl Pearson Jr. to preserve the victory. Brandon Sheppard settled for third after losing second to Pearson on the opening lap and Darrell Lanigan was fourth.

Chris Madden of Gray Court, S.C., blazed around the third-mile oval in 13.495 seconds during the second qualifying group to earn overall fast-time honors. He will start from the pole in Heat 3.

Frank Heckenast Jr. of Frankfort, Ill., was quickest in Group 1, turning a lap of 13.542 seconds to claim the pole position for the first heat.

Eric Wells of Hazard, Ky., was among the drivers who didn’t log a qualifying lap. He broke a driveshaft during practice and didn’t make repairs in time to qualify in Group 1.

Time trials were run after showers skirted just north of the racetrack toward the end of hot laps. Black clouds were right behind the backstretch grandstands but only a few drops of rain fell.

With the track surface rolling into shape, the first WoO hot-lap session was sent out at 6:15 p.m. — a 90-minute delay in the scheduled start of the program.

At 4:32 p.m. CT — minutes after the completion of the drivers' meeting in the pit area — a black cloud that had been threatening the racetrack began to produce rain. The precipitation quickly turned into a moderate shower that lasted about 10 minutes.

By 4:45 p.m. the rain had stopped and skies were brightening, but the scheduled start of hot laps will now be pushed back as track crews rework the racing surface.

The 42-car field is down eight cars from the 50 that entered last year’s USA Nationals preliminary program. … Ten drivers in action this weekend — Kyle Bronson, Tyler Bruening, Justin Duty, Jason Feger, Michael Lake, Dale McDowell, Bobby Pierce, Kent Robinson, Brian Shirley and Ricky Weiss — receive tow money courtesy of the Fans Fund, which is financed by donations from Cedar Lake fans and spectators. This year Fans Fund entrants will race for their share of the money in a $3,000-to-win dash Friday night’s paying at least $2,700 to start. … Among the first-time Cedar Lake visitors is Uniontown, Pa.’s Lake, a 16-year-old who has eight Super Late Model feature wins this season. He drives a Longhorn car fielded by his grandfather Bobby Lake, who entered a car in the 2011 USA Nationals for West Virginia’s Jared Hawkins. … Cedar Lake has long been a thorn in the side of WoO regular Shane Clanton of Zebulon, Ga. — he’s never finished better than seventh in eight career starts in the 100-lapper — but he enters this year’s edition with more confidence than in the past. “Hopefully we’ll run like we did last year,” said Clanton, whose career-best finish came in the ’16 race. … Eric Wells of Hazard, Ky., and his crew had to do some significant work on the rearend of their Longhorn Race Car after a broken right-rear brake caliper during time trials on Wednesday night at Shawano (Wis.) Speedway sheared the bolts out of the rear axle tube. … Noticeably missing from the weekend’s action is 2013 USA Nationals winner Tim McCreadie of Watertown, N.Y., whose plans to run the event for the 11th consecutive year were dive-bombed by hauler problems that kept him from making the trip. He’s home in New York working on moving his equipment over to his Sweeteners Plus teammate Vic Coffey’s newer stacker trailer.

Thanks to heavy rain that washed out Thursday night’s action, the 30th annual USA Nationals weekend at Cedar Lake Speedway begins one day late with a twilight doubleheader. The 30-lap, $6,000-to-win World of Outlaws-sanctioned show that was scheduled for Thursday evening is first on the agenda with officials planning to start hot laps at 4:45 p.m. CT and then run the program straight through in rapid-fire fashion. Upon completion of the opening the event, the track will be reconditioned and the regularly-scheduled USA Nationals qualifying card — time trials, heat races and the FANS Fund Dash plus a full program for Cedar Lake’s NASCAR Late Models — will begin sometime around 8 p.m.

A Thursday-night racing card has become a traditional lead-in to Cedar Lake’s USA Nationals, which includes time trials and heats on Friday night and last-chance events and the $50,000-to-win 100-lapper on Saturday evening. This is the fourth consecutive year that the preliminary program carries WoO sanctioning.

Josh Richards of Shinnston, W.Va., was the winner of last year’s WoO preliminary program, but he will not be in this year’s field.