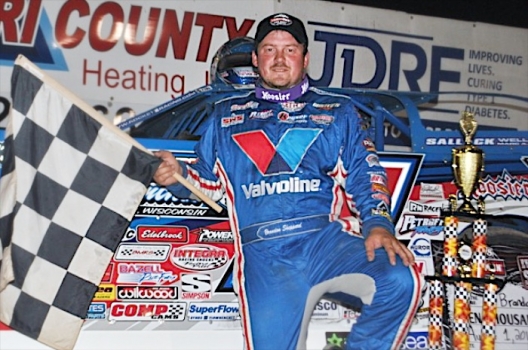 OSHKOSH, Wis. (Aug. 1) — Brandon Sheppard can seemingly win from wherever he starts a race at the moment. Landing the pole position, though, significantly decreases his degree of difficulty.

That was the case on Tuesday night at Oshkosh Speedzone Raceway for Sheppard, who continued his knack for picking the No. 1 starting spot this season and parlayed it into a dominant flag-to-flag victory worth $10,000 in the 50-lap World of Outlaws Craftsman Late Model Series feature.

“I’m pretty lucky on that draw deal right now,” summed up Sheppard, who led a WoO field to the green flag for the ninth time in 28 events.

Sheppard, 24, of New Berlin, Ill., is also pretty fast, of course, and he proved it by keeping his workhorse Rocket Chassis house car in front for the entire distance to register his third straight and 12th overall triumph on the WoO tour in 2017. He was briefly challenged midway through the caution-free race by Don O’Neal of Martinsville, Ind., before pulling away to beat the Lucas Oil Late Model Dirt Series regular by a commanding margin of 5.458 seconds.

The 53-year-old O’Neal, who started second and ran in the spot for all 50 circuits, claimed the runner-up money by a mere 0.177 of a second over WoO traveler Frank Heckenast Jr. of Frankfort, Ill. Morgan Bagley of Tyler, Texas, was the race’s biggest mover after advancing from the 18th starting spot to finish fourth while Mike Marlar of Winfield, Tenn., settled for fifth place after being overtaken by Bagley on lap 47.

Sheppard’s march to the checkered flag in the first-ever WoO stop at the third-mile fairgrounds oval became largely a demonstration of his own driving acumen because he couldn’t rely on signals from his team owner, Mark Richards, or other crewmen to assist him in reading the changing track surface.

“It was hard to see them guys,” said Sheppard, who pushed his already enormous WoO points lead to 270 points over sixth-place finisher Chris Madden of Gray Court, S.C. “When there was a little bit of daylight I could see them real good up on that hill (outside turns three and four), but as soon as it got dark, it went black … I couldn’t hardly see them. I could see them a little bit every once in a while, but not enough to know where I should run.”

So Sheppard fell back on his own ability to find the fastest route around the speedway — a learned trait that B-Shepp clearly has obtained.

“I had to look ahead at lapped cars, see where they were good, where they weren’t good, and just choose what lane I needed to be in,” related Sheppard, whose two previous visits to Oshkosh for Lucas Oil Series events resulted in finishes of seventh (2015) and fifth (’16). “Once I got behind (Shane) Clanton (to lap the Georgia driver during the race’s second half) he was keeping a pretty good pace going and stayed out ahead of me. I seen Clanton was driving off from me on the bottom, like way down on the straightaway even, so I changed my line up a little bit.

“I knew the top was getting pretty black getting into (turn) three and to the middle, so I was kind of chopping that off and leaving on the top. But then I started running the bottom all the way around and that’s where you needed to be at the end. (The surface) never did rubber, but it cleaned up a little bit and there was just a little mud ring around the bottom that if you caught your left-rear in it (off the corner) you could get some pretty good grip.”

Sheppard’s tactics were good enough to survive a fleeting threat from O’Neal, who looked inside the leader rounding turns three and four on lap 20 but almost immediately lost ground and never offered another serious challenge.

“I never seen (O’Neal) under there, but I knew they had to be getting close because I was messing around in lapped traffic too much at the time,” said Sheppard, who converted a pole position WoO start into a victory for the sixth time this season (his other poles resulted in two runner-up finishes and one fifth-place outing). “I just tried to keep my momentum up and everything worked out again for us.”

O’Neal spent the race’s final circuits struggling to hold off pressure from Heckenast, the 29-year-old driver who started third, lost the spot to Eric Wells of Hazard, Ky., on lap seven but then regained it on lap 32 and ran down O’Neal to make a last-ditch bid for second. Heckenast got underneath O’Neal’s Clint Bowyer Racing Club 29 Race Car through turns three and four on the final lap but fell a nose short at the finish line.

“I squeezed (Heckenast) down in one and two and kept him pinched off down there pretty good,” O’Neal said. “Hat’s off to him for not getting into me.

“I think we made some gains on this Peak car tonight,” he continued. “We just need to get a little better to run with the 1 car (Sheppard) there at the end of the race. I thought there early we maybe had something going, but when it come time to really be good we just needed to be a little better.”

Heckenast was satisfied with a third-place performance that represented his first top-five of 2017 on the WoO trail. His previous best finish was sixth, on Feb. 18 at Screven Motor Speedway in Sylvania, Ga., and March 26 at Lone Star Speedway in Kilgore, Texas.

“O’Neal gave me room and raced me extremely clean,” said Heckenast, who drove the Black Diamond machine he debuted two months ago. “He gave me plenty of room to pass him, but I just hesitated in the center and he stayed in the fuel and kept his momentum up and got me there. I definitely would’ve liked to run second, but a podium with these guys is always awesome.”

Notes: Sheppard’s victory was the 18th of his career on the WoO tour. With a dozen wins in ’17, he’s now just six triumphs away (with 17 events remaining on the schedule) from matching Josh Richards’s single-season win record of 18 established last year. … Bagley’s strong run around the inside of the track to finish fourth came after he had to compete in a B-main because a heat-race scrape with Jason Feger of Bloomington, Ill., forced him pitside with a flat tire. … Wells ran in third place for 25 laps but faded steadily after losing the spot to Heckenast, finishing ninth. … The winners of Oshkosh’s two previous Lucas Oil Series events —  Earl Pearson Jr. of Jacksonville, Fla. (2015) and A.J. Diemel of Elk Mound, Wis. (’16) — were never factors in the feature. Diemel experienced immediate trouble and was scored 24th without completing a lap and Pearson finished one lap down in 18th place driving the Moring Motorsports machine.