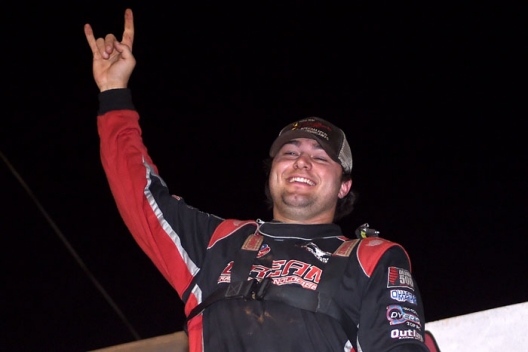 It was polesitter Craig Vosbergen of Perth, W. Australia, charging to the front of the field at the drop of the green flag, with second-starting McIntosh beginning his challenge for the lead on the fourth lap. As the pair worked their way through lapped traffic, McIntosh pulled alongside the Aussie driver, assuming the point on lap 13.

With a yellow flag slowing the field on lap 14, second-running Overton used the restart to his advantage, gaining momentum and closing in on McIntosh. But as the race leaders made their way through lapped traffic at the halfway mark, the Dream Team driver was unable to pull ahead of the Blount Motorsports pilot.

McIntosh held his lead through late-race restarts, but Overton’s charge was far from over. Powering around the high side, Overton edged ahead of McIntosh exiting turn four to lead lap 49, leading the final circuits for his fourth Southern Nationals victory of the season.

“That second caution we had there, I was telling the boys the brakes were going slam to the floorboard,” Overton said in victory lane. “I come down here on that restart when I chose the inside and I pushed up. I said, ‘Dang, we’re done. I just need to make sure I don’t kill nobody out here and just get our points.’ We had a caution on lap-35 or whatever and I started pushing them and they were coming back. I was like, ‘Alright, I just ain’t going to use them until I need to.’

“So, I just waited until we got in traffic, just kept putting enough pressure on Donald (McIntosh). I see his guys down there telling him high, low. They were trying to win the race too. I just waited until the opportunity came and I seen we was closing in in all that traffic. I wanted to be there to strike when I could. I guess he bobbed when he should have weaved."

“It’s been a fun series,” McIntosh said. “They were a little better than we were tonight. Him to get up there on the top like that, I didn’t expect it. I got in to him because I didn’t expect him to be out there. He did a great job the whole series. This was fun. I hate to lead it that long and lose it there at the end. But I can’t thank these guys enough. I keep getting closer at this track and it keeps biting me a little bit. But what a fun series."

Along with his $10,000 victory, Overton cliched his first career Southern Nationals title. With his top-five finish, Buckingham held a two-point advantage over McIntosh in the tour’s final points standings.

“This has been an awesome experience,” Overton said. "I run that Outlaw deal and this is about as close as you can get to it. It gets pretty grueling sometimes. It’s an awesome little deal for anybody around our area to run.”

Notes: Overton scored his fifth career Southern Nationals victory, the fourth of his 2017 campaign. … The race was slowed by three cautions. ... The first yellow flag waved on lap 14 when Chicky Barton lost a drive shaft and slowed off the pace; Barton left the track by ambulance with a possible leg injury. … Matt Henderson slowed on the frontstretch to draw a caution on lap 36; another yellow flag flew on the ensuing restart when Stacy Boles spun in turn four.

A yellow flag waved on the opening lap when Farrel Skelton spun in turns three and four, collecting Jason Walker and Mitchell Burke. As the race went green, outside polesitter Clyde Overholt pulled ahead of Josh Fields to take an early lead. With the five remaining cars evenly distanced on the racetrack, Overholt won the consolation, with Fields running second. Steve Smith and Jeff Neubert finished third and fourth, respectively, to transfer to the feature.

Jumping to the lead at the drop of the green flag, polestter Brandon Overton held nearly a straightway lead when a yellow flag waved on the second lap for Kevin Sams. Overton held his lead on the restart, with Brian Smith slipping ahead of Austin Neely to run second. Dominating all 10 laps, Overton won the final heat, with Smith and Heely rounding out the podium.

Outside polesitter Dakotah Knuckles edged ahead of fellow front row starter Donald McIntosh exiting turn four to take an early lead. McIntosh challenged the race leader at the halfway mark, with third-running Vic Hill in tow. A yellow flag waved on lap eight when Phil Helton slowed on the backstretch. McIntosh slipped ahead of Knuckles on the restart to win the heat race. Knuckles held of Hill to run second, with Kenny Collins  grabbing the fourth and final transfer spot.

With the front row starters racing side-by-side down the backstretch, polesitter Billy Ogle Jr. pulled ahead to lead the opening lap, as David Payne slipped too high in turn four to run second. As Ogle held his lead at the halfway mark, a battle ensued for the final transfer spot, with Matt Henderson getting the advantage over Jeff Neubert. Ogle won the second heat, with transfer spots going to Payne, Chicky Barton and Henderson.

Charging around the high side, front-row starter Craig Vosbergen pulled ahead of polesitter Shanon Buckingham to take an early lead. Vosbergen maintained his spot at the front of the field at the halfway mark, with Buckingham attempting to reel in the race leader. With the top two cars distancing themselves from the field, Vosbergen held off Buckingham to win the heat, with Forrest Trent rounding out the podium in third.

Tazewell is the only track to ever host the Southern Nationals finale. … Saturday’s feature is 51 laps in distance in honor of late regional racer Frank Thompson, who used that number. … In its last five Southern Nationals events, Tazewell has had five different winners. … Billy Ogle Jr. of Knoxville, Tenn., is among drivers with past success at Tazewell. He scored a World of Outlaws Craftsman Late Model Series victory at the high-banked oval back in 2015. … Vic Hill of Mosheim, Tenn., is one of four drivers that have scored multiple Southern Nationals victories at Tazewell. Others include Jonathan Davenport, Chris Madden and Jimmy Owens. … Dakotah Knuckles of Ewing, Va., currently tops Tazewell’s Limited Late Model points standings. He’ll enter the Southern Nationals competition on Saturday. … Stacy Boles of Clinton, Tenn., rejoins the tour after forgoing its Georgia events and Thursday’s stop at Crossville Speedway. … Bubba Walker, the young son of Tennessee driver Jason Walker, was presented with a junior crew chief award at Saturday’s drivers’ meeting. Donald McIntosh of Dawsonville, Ga., also gave the youngster the trophy he received for winning Screven Motor Speedway’s Southern Nationals event. … Seven drivers completed the entire 2017 Southern Nationals schedule.

With Friday’s event at Smoky Mountain Speedway rained out, the Schaeffer Oil Southern Nationals tour moves to Tazewell Speedway on Saturday for its 2017 season finale. The 51-lap feature pays $10,000-to-win.

Scott Bloomquist of Mooresburg, Tenn., was the winner of last year’s Southern Nationals stop at Tazewell, but he will not be on hand on Saturday. Among recent Tazewell winners expected to be in action is Vic Hill of Mosheim, Tenn. Two of Hill’s six career Southern Nationals victories have come at the high-banked East Tennessee oval, the most recent in 2015.

Saturday’s Late Model program will include hot laps, time trials, four heat races, one consolation and the main event. Because it is a $10,000-to-win event, no cars will be locked in through qualifying. All drivers will run heat races to determinte feature starting position.