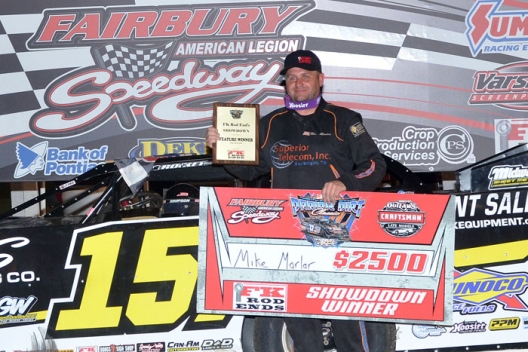 Devin Moran was in a league of his own in the first 25-lap qualifying feature, running away to a flag-to-flag victory worth $2,500.

Jason Feger challenged Moran hard on the first lap, but after that the Ohio driver dominated the action. He crossed the finish line 4.703 seconds — a full straightaway — ahead of Feger in the Dyer’s Top Rods-sponsored event.

“It’s gonna be a long race (Saturday night’s 100-lapper) and I don’t know if they’re gonna have the track the same as they did tonight, so I think we got to get a little better,” Moran said. “I was pretty decent but I was kind of using the holes a little bit as well. We’ll just go back there and keep working on it.”

Moran, 22, was victorious in his Fairbury debut, putting him in position for a morale-boosting outing in the PDC headliner. His preliminary performance certainly gave him a great first impression of the quarter-mile oval and raised his flagging spirits.

“This could definitely make a game-changer for this whole month,” he added. “It’s been a tough month, but we’ve been busting through it and getting better and better.”

McKay Wenger slipped by Michael Kloos for third on lap 15 and finished in the show position. Kloos hung on to claim the fourth and final transfer spot, nipping Billy Moyer at the checkered flag by a nose.

A caution flag flew on lap 12 for Kyle Bronson, who spun between turns three and four. He had used the outside lane to charge from the 15th starting spot to seventh place.

Daniel Flessner also brought out a caution on lap 13 when he spun into the infield on the homestretch.

The former World of Outlaws champion easily outdistanced Ryan Unzicker, who finished 2.582 seconds behind the victor after grabbing second place from Brian Shirley on lap six.

After noting that manhandling his car around the hardscrabble quarter-mile oval gave him a “workout,” Clanton looked toward Saturday night’s headliner.

Shirley settled for third place and Dennis Erb Jr. advanced from 10th to claim the fourth and final transfer spot.

Babb led the race’s first two laps off the pole before bringing out a lap-two caution flag when he climbed the outside wall in the second turn. He pulled to the infield with front suspension damage.

Another casualty was Tyler Erb, who was holding second place on lap five when he suddenly pulled up lame in turns one and two with apparent mechanical trouble.

A third caution flag flew on the lap-five restart for Chub Frank, who slowed with a flat tire and returned after pitting.

Sheppard was running fourth and feeling heat from a charging Bobby Pierce on lap nine when he suddenly turned up the wick. He put space on Pierce, slipped underneath Gordy Gundaker for third on lap 11 and shot by Chris Simpson for second on lap 17 before making his winning move on Madden the following circuit.

The WoO points leader squeezed his Rocket Chassis house car between Madden and the turn-two wall and survived incidental contact with Madden that sent him sideways moments later to assume command for good. Sheppard went on to beat Pierce, who passed Madden for second on lap 21, to the finish line by 0.978 of a second.

“The track was a little bit treacherous up there (on the outside), but if you can get up there and make it happen, you can make it happen,” Sheppard said. “A hundred laps tomorrow like that will make it interesting.”

Madden settled for third and Simpson placed fourth. Frank Heckenast Jr. and Scott Bloomquist were close behind in fifth and sixth, respectively, at the end of the caution-free event.

Blasting into the lead off the outside pole at the initial green flag, Marlar ran alone out front for the entire distance but did have to survive one scary moment. On lap 17 he slipped too high off turn two and lost all his momentum trying to pull out of the the thick cushion, but a caution flag flew for fifth-place Don O’Neal’s trouble behind him and he remained in front.

“I just really got lucky there,” Marlar said of his lap-17 miscue that left him churning through the built-up dirt against the outside wall. “I don’t know how everybody didn’t pass me. I just got over that edge. I seen (Timothy) Culp do it in qualifying today, and (when Marlar did it) I was trying not to get in the gas too hard and rip the bumper off, just try to ease back on the track.

“It’s a tough deal here, so to get in through the heat race is big.”

Tim McCreadie slid underneath Rick Eckert on lap 20 for second place and finished in the position, 1.476 seconds behind the $2,500 winner. Jimmy Owens went underneath Eckert as well on lap 23 and finished third, while Chris Ferguson took advantage of contact between Owens and Eckert that sent Eckert up the track in turns one and two to seize the fourth and final transfer spot.

Eckert fell to fifth, putting him in a Saturday B-main. FALS favorite Kevin Weaver, meanwhile, finished sixth after his cushion-pounding bid to crack the top four following the lap-17 caution period ran out of steam.

The race’s caution flags flew on lap 12 for debris between turns three and four and lap 17 for O'Neal, who got over the turn-two cushion, slapped the wall and had his car's left-rear corner clipped by a passing machine.

Devin Moran of Dresden, Ohio, didn’t take long to find speed in his first appearance at Fairbury as he blazed to the overall fastest time at 12.627 seconds, nipping Shannon Babb of Moweaqua, Ill., by the narrowest of margins (0.002 of a second).

Chris Simpson of Oxford, Iowa, was quickest in the second group, turning a lap of 12.686 seconds.

Moran, Babb, Simpson and Chris Ferguson of Mount Holly, N.C., will start from the pole position in the four 25-lap qualifying features.

Several contenders recorded only one lap in qualifying, including Earl Pearson Jr. of Jacksonville, Fla., Tim McCreadie of Watertown, N.Y., Jimmy Owens of Newport, Tenn., and Scott Bloomquist of Mooresburg, Tenn. Pearson, McCreadie and Owens slipped high and slowed to fall back on a single lap, while Bloomquist missed his spot in the time-trial order and was thus given just one circuit.

Gorgeous conditions — sunny skies and an afternoon high temperature of around 80 degrees — prevail for the opening night of the 28th annual Prairie Dirt Classic. The forecast for Saturday is for virtually identical weather. … The 65-car field signed in for action is the largest turnout in the five years that the PDC has been run as a mid-summer, World of Outlaws-sanctioned event. The previous best car count was 64 in 2015. … With 71 UMP modifieds also on hand, there is little available space left in the pit area for hauler parking. … FALS favorite Kevin Weaver of Gibson City, Ill., has entered his trusty Pierce Race Car — nicknamed “Ruby” — that he steered to overall fast-time honors in qualifying for the last two PDCs as well as a $5,000 #FALS Draw invitational race victory in ’15. … Justin Duty of Mulino, Ore., was supposed to run the PDC as a teammate to his father John, but the younger Duty is the family’s lone entry because John damaged his car in a rollover during last week’s Silver Dollar Nationals at I-80 Speedway in Greenwood, Neb. “Dad junks a car so he just flies in to crew chief this weekend,” said Justin, who has been on the road in the Midwest since early July. … When it was suggested to Eric Wells of Hazard, Ky., that he should take it easy during hot laps, he didn’t disagree. “Oh, yeah, I’m going to be more careful,” smiled Wells, who bicycled into a wild series of flips during last year’s Friday-night PDC practice. … WoO travelers Chris Madden of Gray Court, S.C., and Devin Moran of Dresden, Ohio, are among the drivers making first-ever starts at Fairbury. … A PDC note to consider courtesy of DirtonDirt.com’s Andy Savary: in the four years that the event has been contested under WoO sanction, just four of the 24 heat races have been won by WoO regulars. … World Racing Group officials marked Friday’s program as the latest event in which drivers were tested for mind-altering drugs under the new WRG Substance Abuse Policy instituted for the 2017 season. Fifteen Late Model and 15 UMP modified drivers were randomly selected from the evening’s entry lists to undergo testing administered by staff from the National Center for Drug Free Sport. ... World Racing Group president and COO Tom Deery arrived at Fairbury late Friday afternoon just hours after becoming a grandfather for the first time. His son Kyle’s wife, Lauren, gave birth to a baby boy, Miles, on Friday morning in Sarasota, Fla.; he plans to visit his new grandson next weekend.

The 28th annual Prairie Dirt Classic — not only the biggest Dirt Late Model event of the season in the state state of Illinois, but, with a $30,000 first-place prize, also the richest race ever contested in the Land of Lincoln — kicks off Friday night with a qualifying program that boasts an completely new format.

In its fifth year as a big-money, mid-summer spectacular under the WoO banner, Friday’s action will begin with time trials that set the lineups for four 25-lap “qualifying” features that each pay $2,500 to win and $200 to start. The top four finishers from each preliminary will move on to Saturday night’s 100-lap finale while the remainder will run B-mains before the century grind.

The Prairie Dirt Classic will conclude on Saturday night with WoO B-Mains, the Prairie Dirt Shootout for non-qualifiers and the 100-lap PDC that carries an event-record $30,000 winner’s check, up a significant $3,000 from last year’s race.

Josh Richards of Shinnston, W.Va., won last year’s PDC, but he is not planning to defend his title. Other winners since the event moved to late-July from its traditional Labor Day weekend date include Shannon Babb of Moweaqua, Ill. (2013), Tim McCreadie of Watertown, N.Y. (’14) and Jonathan Davenport of Blairsville, Ga. (’15).