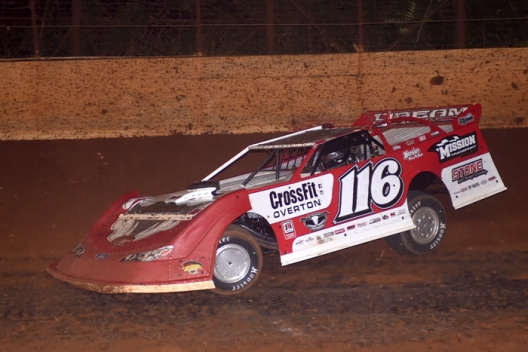 Clocking the night’s overall fast time to start on the pole of the main event, Overton charged to the front of the field at the drop of the green flag, holding as much as a straightaway lead by lap five.

As Overton cruised over the field, a close battle ensued behind him, with Australians Craig Vosbergen and Ben Nicastri racing side-by-side for the fourth-place spot as Donald McIntosh of Dawsonville, Ga., and Shanon Buckingham of Morristown, Tenn., ran second and third, respectively.

Approaching the rear of the field on lap 10, Overton worked his way through lapped traffic, setting a torrid pace and stretching out his lead. With the rest of the top five in a tight race, Vosbergen pulled ahead of Buckingham to run in third halfway mark, setting his sights on second-running McIntosh.

Overton’s dominance continued late-race, with the Dream Team driver holding a straightaway lead at the checkers to capture his third Southern Nationals victory of the season.

“I can’t let him show me up,” Overton said of his car owner Randy Weaver. “We give it our all every time we come over here. I can’t think all of my boys enough for working on this thing. It was definitely on the money tonight. That was probably one of the best cars I’ve ever had.”

After a couple of off nights, Thursday marked another solid points night for Overton, who holds a 20-point advantage over Buckingham in the series standings heading in to the final two events.

“It’s just how it goes,” Overton said. “It’s just racing. You don’t ever know when it’s going to take a turn for the worst. Maybe we’re back on track. We haven’t had any bad luck. Our car’s been fast the whole time. I’m having fun … just want to keep racing.”

“I’m pretty proud,” McIntosh said after the race. “We’ve won three of these races and I don’t think they were handed to us. I feel good. To be as good as we are, I can’t thank these guys enough for standing behind me. (Overton) was a little better than we were tonight. But we’ve got two more nights.”

Returning to the site of his first career Southern Nationals victory, Vosbergen was happy to notch another podium finish.

“I love coming back here,” Vosbergen said. "Of course our first win in the states last year, that makes it a bit special for me. It was a good result of the team. We had two really quick guys in front of us. I thought we had something for Donald there until he got some signals to move down to the bottom and that was pretty much it for me. The car wasn’t moving around as well as I would have liked, but we still had plenty of pace, so I can’t complain with a third-place finish."

Notes: Overton scored his fourth career Southern Nationals victory, the third of 2017. … Feature cars began rolling to the track around 9:15 p.m. … The caution-free feature finished in just a little over eight minutes. … Third-place finisher Craig Vosbergen was the winner of last year’s Southern Nationals event at Crossville; the Australian driver notched his second straight podium finish. … Cory Hedgecock was the winner of the Steel Head feature.

Polesitter Shanon Buckingham shot to the front of the field on the opening lap, as third-starting Ben Nicastri challenged Kenny Collins for the runner-up spot. As Buckingham stretched his lead over the field at the halfway mark, the battle for second continued behind him, with Matt Henderson and Rob Mayea fighting for fourth. Buckingham won the heat to start fifth in the feature, with Collins and Nicastri rounding out the podium.

Crossville returned to the Southern Nationals schedule last season for the first time since 2009. … The Tennessee oval has hosted the series five times in the history of the tour. … Through Thursday’s event, seven drivers have perfect attendance with the 2017 tour. …  Blount Motorsports pilot Donald McIntosh of Dawsonville, Ga., scored his richest career victory at Crossville last October. … Brandon Overton of Evans, Ga., and his Randy Weaver race team had one of the shortest drives for Thursday’s event. The Dream Team is based out of Crossville. … Cory Hedgecock of Loudon, Tenn., and Ryan King of Seymour, Tenn., will pull double duty in both the Super Late Model and Steel Head Late Model divisions. … After racing with the Sunoco American Late Model Series on Wednesday at Baer Field Motorsports Park in Fort Wayne, Ind., Australian driver Ben Nicastri made the trip south to join the Southern Nationals at Crossville. ... Farrel Skelton of Mount Pleasant, Tenn., has rejoined the tour after skipping Monday's event at Boyd's Speedway in Ringgold, Ga.

For the second straight season, Crossville Speedway is set to host the Southern Nationals tour, with $3,500 on the line in the eighth round of miniseries action.

Thursday’s Super Late Model program will include hot laps, time trials, one heat race and the 35-lap main event. The The top two qualifiers from each of two qualifying groups will be locked into the first two rows of the feature lineup with the heat race setting the remainder of the field.