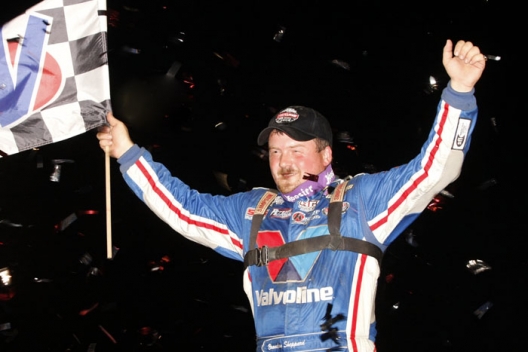 Not surprisingly, that was a winning combination in Wednesday night’s 40-lap World of Outlaws Craftsman Late Model Series feature. Sheppard led every circuit of the national tour’s first-ever stop at the quarter-mile oval, giving him victories in both of his July visits to the track.

Sheppard, 24, of New Berlin, Ill., survived a stout late-race challenge from Chris Madden of Gray Court, S.C., to secure the $8,000 first-place prize for his series-leading 10th WoO triumph of 2017.

The checkered flag came just under four weeks after his July 4 UMP DIRTcar Summernationals win at Fayette County, a $10,000 score he earned driving his family-owned No. b5. He repeated Wednesday night piloting the Rocket Chassis house car that is his primary ride this season.

“I’ve got a lot of experience at this track,” said Sheppard, who also won a Summernationals A-main at Fayette County in 2014. “It’s exciting for me to get to come back to (an area) where I cut my teeth at and get to race this awesome race car.”

Closing out his latest success didn’t come easy, however, for the second-starting Sheppard, who built commanding edges following restarts on the opening circuit and lap 28 but couldn’t do the same after the final caution flag flew on lap 36. Madden, who started seventh, found speed using the inside lane and raced alongside Sheppard throughout the remaining laps before falling just 0.363 of a second short at the finish line.

Rick Eckert of York, Pa., finished third, nipping polesitter Shane Clanton of Zebulon, Ga., for the position by a scant 0.035 of a second. Timothy Culp of Prattsville, Ark., finished fifth after starting 15th, though with mixed emotions because he felt bad about the contact he made with Devin Moran of Dresden, Ohio, on lap 36 that caused Moran to spin between turns one and two while battling for fourth place.

An otherwise ho-hum race for the top spot — Sheppard led by as much as a straightaway during the 28-lap stretch of green-flag action that followed a caution flag on the opening circuit for Chub Frank of Bear Lake, Pa. — turned tense after Moran’s spin tightened the field for a deciding sprint. Madden, who overtook Clanton for second on lap 24 but wasn’t able to seriously challenge Sheppard after a lap-28 caution period for the slow car driven by Bobby Pierce of Oakwood, Ill., suddenly rose up in a bid to unseat the runaway WoO points leader.

Sheppard wasn’t surprised that he had to hang on for dear life over the final four laps.

“The top of the track got burnt off quite a bit there the more we raced and I don’t think anybody really had the right tires on,” Sheppard said. “I think we were a little bit too soft, especially on the right-front tire. I think I pushed it off about the third lap, so I knew it was gonna be a little bit hairy towards the end of the race.”

As Madden worked the extreme inside line, Sheppard continued buzzing around the top of the speedway and was able to rocket off turn four with enough speed each lap to narrowly maintain command at the start-finish line over Madden.

Madden, 42, couldn’t quite grab the lead with his Longhorn Race Car, which was hampered for much of the distance by a pesky mechanical problem that caused his engine to stutter and blubber.

“We had a fuel pressure issue, and running around the bottom it was blowing in my face,” said Madden, who made his first-ever start at Fayette County. “I got to second there in the bottom, and then I was actually making some ground on (Sheppard) in the middle of the racetrack so I just stayed there.

“Then we had that restart (on lap 36) and I’d seen Eckert in the bottom digging again (moments before), so I knew I had to get back down there and give it a try. If we wouldn’t have had the (fuel pressure) issue we had, we probably could’ve finished it off.”

The 51-year-old Eckert — another first-time Fayette County competitor — passed Clanton for third on lap 30 and was racing Madden hard for second on lap 36 when the caution lights blinked on. The veteran’s hopes of overtaking Madden were dashed, however, by Madden’s savvy switch to the inside groove that Eckert had been making time in.

“I really wasn’t very good, and then I found that bottom that had a little traction, which saved me,” said Eckert, who started fourth in Paul Crowl’s Longhorn machine. “I had to knock that (inside marker) tire in into (turn) one with about 10 to go, and then I got to where I could run with ‘em.

“I knew on that (final) restart that Chris was gonna come left (to the inside) because he’d seen me down there. That’s what you do — and it about won him the race.”

Eckert was left to outrun Clanton for third place.

“I got to slipping once Chris got down in front of me — it dirtied it up in front of me — and I could hear Clanton coming,” said Eckert, who recorded his 10th WoO top-five finish of 2017. “I thought I was ahead of him (at the finish), but you never know.”

Notes: Sheppard tallied his 16th career WoO victory, tying him with Chub Frank for ninth on the national tour’s all-time win list. … Sheppard’s Rocket Chassis house car team was triumphant at Fayette County’s 2016 Summernationals event with Josh Richards of Shinnston, W.Va., behind the wheel. … Madden’s runner-up outing moved him into a tie for second in the WoO points standings with Tyler Erb of New Waverly, Texas, who finished seventh. Sheppard holds a commanding lead of 226 points over Madden and Erb. … Shannon Babb of Moweaqua, Ill., was running fifth when he headed to the pit area with a flat right-rear tire during the lap-28 caution period. He didn’t return. … Bobby Pierce of Oakwood, Ill., salvaged a 10th-place finish after starting 25th thanks to a promoter’s option berth in the feature. The night’s fast-timer didn’t qualify after experiencing mechanical trouble in his head and breaking a driveshaft when he attempted to start the B-main. … Joey Coulter of Union Grove, N.C., didn’t enter the event, marking the first time he missed a WoO show this season. He had competed in all 25 previous races this season with three top-10 finishes to his credit.

With rain approaching the area, officials pushed up the B-main on the schedule and moved the feature redraw to the WoO trailer to save time. The 8-minute horn to line up the 40-lap feature was blown at 8:45 p.m. … Shane Clanton ended up with the pole position for the feature, but he remarked during the redraw that he didn’t think he was “good enough to win.” He’ll get a gauge of his strength quickly with points leader Brandon Sheppard starting alongside him. … WoO provisional starters are Chub Frank and Kyle Bronson, whose evening began in rough fashion when he slapped the wall during time trials. … Bobby Pierce’s trip to Fayette County was frustrating. Mechanical trouble knocked him out of his heat race and his attempt to run the B-main ended before he completed a lap due to a broken driveshaft; he was added to the feature as a promoter's option, however.