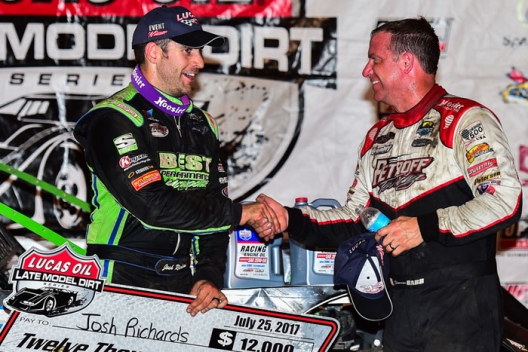 The Shinnston, W.Va., driver proved he was right on target with his assessment so many years ago as he grabbed a $12,000 Lucas Oil Late Model Dirt Series victory Tuesday night in his first trip to the tight, action-packed oval — with Babb hot on his heels, no less.

The ninth-starting Richards, who expanded his Lucas Oil points lead with his eighth series victory of the season in the St. Louis U-Pic-A-Part 100, slid under Babb amid traffic on the 60th lap, then turned back challenges from Babb and two other home-state contenders in the race’s late stages.

The final test for Richards came when a lap-99 caution flag set up a one-lap dash to the checkers. Richards kept Babb in check.

“When you’re at Macon and you have Shannon Babb on your bumper for a one-lap-to-go restart, it definitely makes you a little nervous,” the 29-year-old Richards said. “I can’t thank these guys enough. This is my first time here. This might be my new favorite place. This is awesome. It’s a lot of fun to race at.”

Babb, who led laps 33-59, settled for second in the midweek special with Darrell Lanigan of Union, Ky., third ahead of Jason Feger of Bloomington, Ill. Former race winner Jimmy Owens of Newport, Tenn., rounded out the top five after starting 18th.

Pierce’s demise came after the Oakwood, Ill., driver’s 19th-to-fourth charge ended with a turn-four spin just as the white flag flew. He'd run as high as third, but a pair of lap-93 scrapes with Feger — first on the backstretch, then in turn four — dulled his momentum and he twirled on the last lap when he made contact with Feger racing for third.

Sheppard, the New Berlin, Ill., driver fielding his family-owned No. B5, battled among the leaders most of the race but faded beginning on lap 70 and retired on lap 75 due to a broken left-rear shock that plagued him for most of the race.

Bloomquist, the Mooresburg, Tenn., driver who started outside the front row, led the first 32 laps but got sideways between turns one and two after contact from Babb, who clipped the rearend of Bloomquist's car when the leader entered the first corner in a manner Babb didn't expect. Babb assumed command as Bloomquist slipped back to sixth before pitting during the next caution five laps later.

Richards, who has competed on scores of dirt tracks in his 13-year career, had never seen Macon’s tiny bullring, but he’d heard about it from Babb.

“Every time we go to his shop he makes us watch (video of) a race here at Macon,” Richards said in victory lane.

Babb may have unwittingly given Richards an edge with his video tutorial so many years ago.

Richards wasn’t so sure early in the night as he and crew chief Randall Edwards tried to dial in the Best Performance Rocket Chassis.

“We hot-lapped not too well, we qualified OK, I just didn’t know if we could get it figured out,” Richards said in victory lane. “We made some changes for the heat race and it felt better, then the feature.

“I knew Babb had a harder right-rear tire on, so that long green (laps 69-99) he was getting better and better and better. (When) that caution came out, I was definitely sweating it a little bit, but it feels good to be here.”

Richards excelled in the lower groove while Babb made his best laps right against the wall, so much so that the right-rear corner of his spoiler was broken most of the race.

“It was a helluva race. That top was there tonight,” Babb said. “Josh, he was able to go low and slow and got by us. The middle to the top was about what we had (for the best grooves). It looked like Josh was good everywhere. … congrats to those guys, they did a helluva job. The first time here, that’s a good run for ‘em.”

In finishing third, Lanigan couldn’t quite keep up with the top two cars, but he picked up two spots in the final two laps while watching a whale of a race.

“This place is actually fun once it starts to slick off. You can move all over it. It had to be a great race for the fans, because it was definitely fun in the car,” Lanigan said. “We were pretty good around that bottom (groove) there, and it gave up a little bit later in the race. But if that bottom would’ve stayed there, we would’ve been right there. But like I said, we’ll take a top-three. The way our luck’s been this year, that’s like a win right now.”

Eight cautions slowed the action, the most serious on lap 31 when the cars of Brent Larson and Steve Francis tangled and got hooked together inside turn four, requiring several minutes to disconnect the cars.

Notes: Richards notched his fifth July victory in 11 Lucas Oil races. … Runner-up Babb was looking for his second Lucas Oil victory of the season; he’d won May 19 in Luxemburg, Wis. … In the final 10 laps, Richards was leading the way with three Illinois drivers — Babb, Pierce and Feger — giving chase. … Tim McCreadie was sent spinning out of sixth place in the chain-reaction jam-up that resulted from Bloomquist's lap-32 spin. T-Mac twirled 360 degrees through the infield and, with no caution thrown, came back on the track at the back of the pack. He went on to finish ninth. ... Gregg Satterlee slowed for a lap-68 caution, culminating a rough first-time Macon visit for the Lucas Oil rookie. … Brent Larson debuted a new Longhorn Chassis and ran in the top five the first 28 laps before things took a bad turn. The Lake Elmo, Minn., driver got sideways in turn three to trigger a lap-31 yellow that ended with Dennis Erb Jr. and Boom Briggs spinning behind him, then shortly after the ensuing restart tangled with Steve Francis with their cars literally being hooked together for several minutes and Larson getting a flat tire. … Macon rookie Tony Jackson was part of a multicar caution on lap 28 and slowed to draw a lap-45 yellow as well. … Fourth in Lucas Oil points, Don O’Neal, who switched to his second car after sustained damage in his heat when Pierce slowed in front of him due to a fuel line coming loose, fell off the pace on the third lap to draw the first caution. He pulled to the pits and his team found a hole in the radiator, forcing him to retire with his worst series finish since February. … Don Hammer was the first retiree with a broken shock mount.

After both the 15-lap B-modified and 20-lap UMP modified features went non-stop, the field for the St. Louis U-Pic-A-Part 100 began assembling in the staging area around 8:25 p.m. … Bobby Pierce will have to charge forward from the 19th starting spot in order to win Macon’s Lucas Oil event for the second straight year and third time in four years. He failed to finish his heat race after his car began sputtering due to a fuel line that fell off and he was struck on the backstretch by Don O’Neal. … The damage O’Neal’s car sustained forced him to retire from further heat action as well. He pulled out his backup car to run the feature, which he will start from the 22nd spot. … O’Neal’s team owner, NASCAR driver Clint Bowyer, is in the pit area watching O’Neal and Darrell Lanigan compete two days after crashing hard in the Brickyard 400 at Indianapolis Motor Speedway. ... Outside front-row starter Scott Bloomquist has won at Macon — a UMP DIRTcar Summernationals event in 1990.

A 25-car field is signed in for the Lucas Oil Series program that was postponed by rain on April 29. There’s no threat of precipitation this time; weather conditions are absolutely perfect with sunny skies and temperatures around 80. … Drivers making their first-ever starts at the high-banked, fifth-mile bullring include Lucas Oil Series points leader Josh Richards of Shinnston, W.Va., Gregg Satterlee of Indiana, Pa., Hudson O’Neal of Martinsville, Ind., Boom Briggs of Bear Lake, Pa., and Tony Jackson Jr. of Lebanon, Mo., who decided to make the haul to check out the track. … Brandon Sheppard of New Berlin, Ill., is driving his family-owned No. b5, but his Rocket Chassis house car boss, Mark Richards, is in the pit area to lend his expertise. … Brent Larson of Lake Elmo, Minn., who finished ninth in Macon’s July UMP DIRTcar Summernationals event, is back in action after vacationing in Mexico with his wife upon the completion of the Hell Tour. … Bobby Pierce of Oakwood, Ill., has won two of the three Lucas Oil Series events contested at Macon, capturing the races in 2014 and ’16. He also won the track’s July 6 Herald & Review 100 that was part of the Summernationals schedule. … Kyle Bronson of Brandon, Fla., is in the pit area with his hauler, but he’s spending the night spectating to save his equipment because he has plans to continue his long road trip at Fairbury (Ill.) American Legion Speedway this weekend and Cedar Lake Speedway in New Richmond, Wis., and Florence Speedway in Union, Ky., the next two weeks.