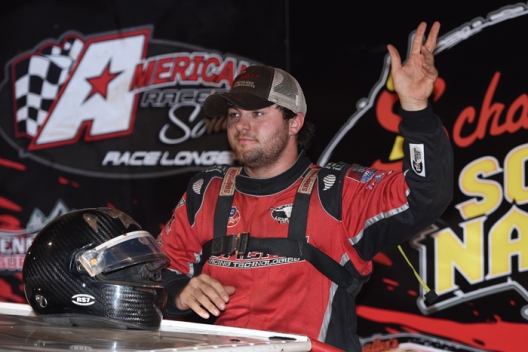 RINGGOLD, Ga. (July 24) — There has been little room for error in these Schaeffer’s Oil Southern Nationals. That didn’t change Monday night. In a points race that could very well go down the final series race at Tazewell (Tenn.) Speedway, Brandon Overton of Evans, Ga., made sure he collected the max.

From the pole, Overton led flag-to-flag to win at Boyd’s Speedway. He averted early trouble with a lapped car and cruised to a convincing victory, in the process reclaiming the points lead that he lost two races earlier. Craig Vosbergen of Perth, W. Australia, finished second to earn his best series finish this season and Casey Roberts of Toccoa, Ga., finished third.

Ronnie Johnson of Chattanooga, Tenn., advanced from seventh to finish fourth, while ninth-starting Jake Knowles of Rome, Ga., followed him to finish fifth.

After suffering a flat tire while leading in back-to-back races, Monday’s win was a rebound victory for Overton and his Chip Stone and Randy Weaver-backed Dream Team. Overton collected $3,500 for his third career Southern Nationals win while jumping from third to first in the series standings.

“We had a pretty good race car tonight,” said Overton. “Dale (McDowell) had the race track pretty good. Like I said, we’re just happy to finish one of these things. I hope the bade luck is behind us.”

Headed to Boyd’s Overton was far from reeling — he only trailed co-points leaders Donald McIntosh of Dawsonville, Ga., and Shanon Buckingham of Morristown, Tenn., by a mere two points. But after three straight triumphs by McIntosh, combined with his own tough luck, Overton needed to stop the bleeding.

It helped that finally he was able to be on the good side of Lady Luck. Racing through traffic on lap 16, Overton narrowly escaped disaster again when he darted out of the path of the spinning Casey Turman. McIntosh, who was running second at the time, wasn’t as fortunate as he slid hard into Turman’s machine.

“I was about to pass him (Turman) there and I said, ‘damn I think he’s gonna spin out,’” said Overton. “I hate it for Donald. I know how that goes. You really don’t know which way them guys are gonna spin. (It’s) tough luck. You know we’ve had our fair share of it. Maybe this (bad luck) is behind us.”

It marked the third straight series race that lapped traffic played a pivotal role in the outcome. While McIntosh wasn’t challenging Overton, he was closing in as they maneuvered through traffic. Unable to steer clear of the lapped car, however, McIntosh had to go to the rear of the field. He limped his damaged machine home to a 13th-place finish, the last car on the lead lap.

McIntosh, who was the overall fast qualifier and started on the outside of the front row, chased Overton from the opening lap. Overton was clearly on cruise until they began to catch the tail of the field. With his lead shrinking, he got the break he needed — finally a fortuitous one — when McIntosh collided with Turman.

“We’ve had a couple of rough nights,” said Vosbergen. “We started off pretty good. Unfortunately we got unloaded there at Swainsboro and really took a hard lick and did some damage to the car. You know, I’ve just got the best crew anyone could ask for. My son Brent just works his tail off and we’ve got Kevin Rumley along with us this year, who’s obviously just one of the best in the business. It’s just great to sorta throw things off him; he’s got the experience where we haven’t.

“Michael and Matt, they’ve worked their butts off. We’ve come from a cold winter into this heat and we’ve really earned it. I’m pleased to we can get where we put it on the podium and give ‘em a result to make off their hard work worth it.”

Neither Vosbergen nor Roberts managed to climb any higher and neither were a threat to Overton, who pulled away to win by 2.187 seconds and stake his claim atop the series standings — for now — by 12 points over Buckingham and 24 ahead of McIntosh.

Ronnie Johnson of Chattanooga, Tenn., is behind the wheel of a Richard Austin-owned machined tonight. … After mechanical problems forced him to a borrow a car at Swainsboro on Friday, Kenny Collins of Colbert, Ga., skipped Saturday’s series race at Screven. Collins, who is seventh series points, is back with the tour at Boyd’s. … After traveling to the first six events, Farrel Skelton of Mt. Pleasant, Tenn., was not at Boyd’s. Skelton was at series event at Swainsboro and Screven, but failed to qualify for either of those events. He was eighth in points entering Monday’s race. … Steve Casebolt of Richmond, Ind., has thrown in the towel as well. Casebolt was fourth in points. The departure of Casebolt and Skelton leaves the tour’s perfect attendance at six drivers. … Rob Mayea of Bend, Ore., continued his foray into southeastern Late Model racing with a visit to Boyd’s, but the 45-year-old, four-time Willamette Speedway champion failed to crack the starting lineup. He missed the transfer spot by one car after finishing ninth in his heat.

Casey Roberts of Toccoa, Ga., shook off and early challenge from Ronnie Johnson to win the first heat. The two race side-by-side for the first three laps until the race’s only caution slowed the pace. Roberts powered ahead on the restart and rolled to the win by eight car lengths. Jake Knowles edged Ivedent Lloyd Jr. for fourth. Heath Hindman finished fifth.

Brandon Overton of Evans, Ga., and Donald McIntosh of Dawsonville, Ga., matched each other during qualifying, with Overton setting the quick time in Group A with a mark of 15.499 seconds to earn the pole for the feature and McIntosh setting the quick time in Group B — and the overall fastest time — to earn a starting spot on the outside of the front row in the 22-car A-main. Ahnna Parkhurst, also of Evans, Ga., was second-quick in Group A at 15.556, while Craig Vosbergen of Perth, Western Australia was second quick in Group B at 15.449. Those four drivers are locked into the main event, while the rest will run heats to determine their starting spot. With on two heats tonight, Ronnie Johnson of Chattanooga, Tenn., will start from the pole of the first heat and Jason Croft of Woodstock, Ga., will start from the pole of the second heat.

The seventh round of the Schaeffer’s Oil Southern Nationals moves to the far northwest corner of Georgia, where Boyd’s Speedway, a 1/3-mile semi-banked oval, is nestled just to the south of neighboring Chattanooga, Tenn. The track is unique in that the majority of the pit area is in the Volunteer State. Most drivers will only be in Georgia when they are surveying the track or on the track racing.

Just past the tour’s halfway mark, the points race is shaping up to be a dandy. With three series wins this season, Donald McIntosh of Dawsonville, Ga., is tied with Shanon Buckingham of Morristown, Tenn., atop the series standings. Sitting just two markers back in third is Brandon Overton of Evans, Ga.

Monday’s Super Late Model program includes hot laps, time trials, two heat races and a 35-lap main event. Entries will be split into two groups for time trials, with the top two qualifiers from each group locked into the main event. Heat races will then determine the remainder of the starting field.