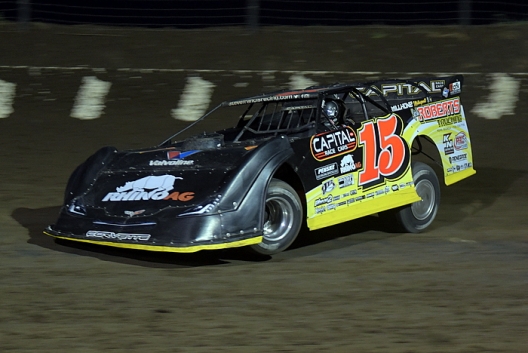 With a victory from the third starting spot and a runner-up finish from the eighth position under the Lucas Oil Late Model Dirt Series event’s double-heat format, Francis accumulated the most passing points to earn the pole position for Saturday night’s seventh annual 80-lap finale that boasts a record $53,000 first-place prize.

Francis, 49, of Bowling Green, Ky., topped a qualifying card that saw the 10 heat races won by 10 different drivers. It marked the fourth time in the seven-year history of the Silver Dollar Nationals that there were no repeat victors in the two rounds of heat action.

Don O’Neal of Martinsville, Ind., captured Round 1’s second heat and finished second in Round 2’s fourth prelim, securing him the outside pole for the SDN A-main. He won the inaugural event in 2011.

Other heat winners in Round 1 were Chad Simpson of Mount Vernon, Iowa, Darrell Lanigan of Union, Ky., and Dennis Erb Jr. of Carpentersville, Ill., while Round 2 victors were Brian Shirley of Chatham, Ill., Tim McCreadie of Watertown, N.Y., Scott Bloomquist of Mooresburg, Tenn., Rodney Sanders of Happy, Texas, and Brandon Sheppard of New Berlin, Ill.

The only heat winner who wasn’t among the 18 drivers to lock into Saturday night’s SDN feature was Sheppard, who failed to gain enough passing points because he was knocked out of his Round 1 prelim by a busted radiator and fan his Rocket Chassis house car sustained in an opening-lap scramble and he won his Round 2 heat from the pole. He is scheduled to start fifth in Saturday’s second B-main.

“It was pretty good,” Francis said. “For as bad as we were last night (in hot laps), it kind of shocked me. We made two or three little changes today, I talked with (Capital’s) Marshall (Green) two or three times about things I was feeling and things I didn’t like the feeling of, and we thought about it a little bit. Then we spent about half the day on the spring smasher (in the trailer) working on stuff.”

While Francis has registered just a single top-five finish in Lucas Oil Series competition this season — fifth on July 6 at Fayetteville (N.C.) Motor Speedway — he is hopeful that his weekend-starting performance at I-80 signals that the recent improvement he’s experienced will lead to better feature results.

“We’ve been kind of disappointed in the year, but it’s not because of lack of effort on anybody’s part. What everyone doesn’t always realize is that in December we had nothing for a race team. We built a whole race team that’s competitive on the Lucas schedule in six months. That’s kind of hard to do.”

Francis is thankful that his supporters — Green, engine builder Jack Cornett, Penske Shocks’ Ronnie Crooks, his crew — have not lost faith in him as he’s wallowed through a Lucas Oil Series winless drought dating back to February 2014.

“All those guys have stood behind me: ‘We know you still know how to do this. You didn’t forget how to do this. We just have to get you something you’re comfortable with,’” Francis related.

At least on Friday night, Francis found a combination that had him feeling good.

“I don’t know if I’m gonna say I’m confident, but I’m comfortable in my race car right now,” said Francis, whose career-best finish in four previous SDN feature starts is third, in 2012. “We seem to always, every night, have that one restart or something that just kind of snake-bites us — we get in the wrong lane on a restart, I do something dumb. So that’s the biggest thing we have to avoid right now. If we can do that (in the 80-lapper), I think we’ll be alright.”

Recovering from his early exit in the first round of heats, Brandon Sheppard led every circuit of the final 12-lap prelim to take the checkered flag. Winning from the pole, however, didn’t earn him any extra passing points. Kyle Bronson finished about 1 second behind in the runner-up spot.

Rodney Sanders ran away with the 12-lapper, beating Don O’Neal with 1.772 seconds. Polesitter Tad Pospisil slipped to third in the final rundown.

Scott Bloomquist rolled off the outside pole to assume command at the initial green flag and never looked back en route to a convincing 12-lap victory. A caution flag flew on lap eight when Justin Duty stopped in turn four.

Tim McCraedie took advantage of his pole position start to score a flag-to-flag triumph in the 12-lap event. Kyle Berck finished a distant second, nipping Timothy Culp at the checkered flag a full straightaway behind the victor.

Brian Shirley grabbed the lead from Boom Briggs on lap two and went to grab the 13-lap victory over Steve Francis, who burst forward from the eighth starting and crossed the finish line less than 1 second behind the winner. Mike Marlar brought out a caution flag on lap two when he spun between turns three and four while attempting to make a move for third place and Austin Siebert slowed on lap 11 for another caution.

Darrell Lanigan quickly shot forward from fifth to grab the lead from Tony Jackson Jr. on lap one and never looked back on his way to the 12-lap victory. Jackson finished 1.290 seconds back in second while Jason Krohn grabbed third from Jesse Stovall rounding turns three and four for the final time. A caution flag flew on lap 11 when Bill Leighton’s car went up in smoke on the homestretch; Lanigan was coming off turn four to take the checkered flag when Leighton slowed, but officials put out a caution when Leighton’s car flared up momentarily and then ran another circuit.

Don O’Neal dominated the action, pacing every lap en route to beating sixth-starter Shannon Babb by 2.268 seconds. Brian Shirley picked up six spots to finish third. Brandon Sheppard retired without completing a lap after his Rocket Chassis house car sustained right-front damage in an original-start scramble that was triggered by J.C. Wyman’s turn-two spin. Wyman spun again in turn two on the ensuing restart, sending him to the pits.

Chad Simpson held off a last-lap challenge from Josh Richards to score a flag-to-flag victory in the 13-lap prelim. Earl Pearson Jr. was the big mover in advancing from ninth to finish third, while Mike Marlar slipped past Chris Simpson on the final circuit to place fourth.

The Silver Dollar Nationals has brought typically scorching summer conditions with temperatures hovering around 100 degrees and a heat index climbing even higher. The temps are actually slightly cooler than they were for last year’s SDN. … Many teams have strung tarps between the lift gates of their trailers to provide some shade from the punishing sun. … After flipping wildly during Thursday night’s hot laps, Jesse Stovall of Billings, Mo., has parked his thoroughly damaged No. 00 for the weekend. He has picked up a ride in Springfield, Mo., veteran Terry Phillips’s backup Black Diamond car and will hot-lap to see if he’s feeling well enough to race. … Justin Duty of Portland, Ore., has been on the road racing in the upper Midwest for two weeks; this weekend, however, he’s joined by his father John, who flew out to compete in his car that’s been in the trailer with Justin. Pro Power’s Bill Schlieper dropped off a fresh engine for John’s car at the track on Thursday en route to a Lucas Oil Off-Road event in Wheatland, Mo., and father and son dropped it in the car on Thursday afternoon. “It’s lovely weather for motor installation, “ Justin said of the sweat-soaked job. … Austin Siebert of Kansas City, Mo., is making his first Dirt Late Model start of the season after sitting out the first half of 2017 while recovering from wrist surgery. … Brandon Sheppard of New Berlin, Ill., is entered in the weekend’s action with the Rocket Chassis house car, but he’ll compete without the operation’s owner, Mark Richards, calling the shots in the pits. Richards was at the track for Thursday night’s open practice but flew home this afternoon to attend his daughter’s wedding this weekend. … Andrew Kosiski of Omaha, Neb., the son of I-80 promoter Joe Kosiski, was forced to abandon his plans to compete in the SDN after breaking a motor during Thursday night’s Malven Bank Super Late Model Series preliminary program. … One note to consider for Friday night’s double heat-race show: only four drivers have won two heat races under the event’s unique format. The group includes Brian Birkhofer (2012), Tyler Reddick (’12), Jonathan Davenport (’14) and Jared Landers (’16) — none of whom are in this weekend's field.

The Lucas Oil Late Model Dirt Series and Lucas Oil Midwest LateModel Racing Association join together to co-sanction the seventh annual Silver Dollar Nationals at I-80 Speedway, a half-mile oval outside Omaha owned and promoted by Nebraska’s well-known Kosiski family. A record first-place prize of $53,000 has been posted for Saturday night’s 80-lap A-main, which boasted a $25,000 payoff for its inaugural edition in 2011 and offered a $40,000 check one year ago.

The three-day event kicked off Thursday with an open practice for Lucas Oil competitors along with a complete racing program for the Nebraska-based Malvern Bank Super Late Model Racing Series. The preliminary event’s $5,300 top prize was captured by Kyle Berck of Marquette, Neb.

Friday night’s card features hot laps and two rounds of heat races for the Late Model competitors on hand along with a identical two-round heat-race format for United State Modified Touring Series entrants. No time trials will be contested for the Dirt Late Model division; heat races will be aligned by a draw with the distance determined by the number of starters plus two laps, and combined passing points from the prelims will set the lineups for Saturday’s main event.

The top 18 drivers in heat race passing points will be locked into the 80-lap feature, while remaining drivers will run consolation races on Saturday to secure feature starting spots. The 32-car feature field will then be filled out with multiple rows of provisional starters.

Saturday’s grand-finale card also features the Belt Bash for Late Model non-qualifiers, which gives the winner the option of taking the $3,000 first-place prize or a feature starting spot, and the conclusion of the $10,000-to-win USMTS program.

With temperatures once again soaring in the neighborhood of 100 degrees, officials have pushed back the start of Friday's hot laps to 7:30 p.m. CST.