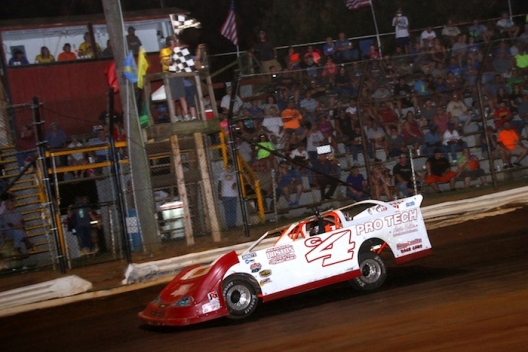 “Tyler, he coached me all night,” Carpenter said in victory lane. “He wouldn’t tell me what to do, but if I was doing the wrong thing, he’d say, ‘I don’t know Dad. That’s your move, you do what you want. But I wouldn’t do it.’ I pretty much did what he did.”

Winning his heat race to start outside the front row, the elder Carpenter shot to the front of the field at the drop of the green flag, stretching his lead in the early running. As the leaders approached the rear of the field on lap 10, Tyler began reeling in the race leader, only to have his charge slowed by a lap 18 caution.

With Carpenter holding his lead through the restart, the race was slowed again just two laps later. Third-starting Zack Dohm of Cross Lanes, W.Va., used the ensuing restart to his advantage, powering ahead of second-running Tyler to challenge the elder Carpenter for the lead.

His sights set on a second Richmond victory, Dohm attempted to slip past Carpenter on the high side on lap 38, only to slow off the pace one lap later, retiring to the pits.

Successfully navigating lapped traffic in the race’s final stages, Carpenter was never challenged for the lead a second time, besting his son, the defending Butterball Memorial winner, at the checkers for his first career Richmond victory.

“I had a good teacher, he’s been down here a couple of times before me,” Freddie Carpenter said of his son in victory lane. “I’ve got to give props to Steve Stollings. He’s in one of our cars. We come around there to lap him and he didn’t know where I was at. After the caution come out I rolled up there beside him on the outside and let him know it was me. So we came back around to lap him again and he moved up out of the race line. It was an awesome move on his part.”

“He got me good,” Tyler said. “I was more worried about Zack (Dohm) than him because he ain’t been here. I don’t know if I gave him too much advice or he just had a little trick up his sleeve himself, but he got me good. I’m not sure what happened to Zack, if he got a flat or what. But it was going to be a real good race between him and Zack. I’m just real thankful to get second. I wouldn’t rather lose to anybody but my dad.”

A victory in the Butterball Memorial would have been special to Carrier, a former Kentucky native who remembers watching the late racer compete. But he’s not hanging his head over a third-place finish.

“We needed some green flag runs with what we had on the car,” Carrier said. “We needed some lapped traffic so them guys would start moving off that bottom, or just kind of slow them up to where you could maybe roll on the top. But them cautions kind of killed us there at the end. But we had a good car, a good finish. I wish I could have won this race. I’ve been wanting to win this race for a long time because of Butterball. I watched him race here when my dad raced here. It would have been cool to win this race.”

Notes: The elder Carpenter has captured weekly victories at multiple tracks in 2017, including I-77 Speedway, Ohio Valley Speedway and Legendary Hilltop Speedway. … Despite suffering an arm injury in Friday’s modified feature at Muskingum County Speedway, defending Butterball winner Tyler Carpenter raced to a runner-up finish. … Seventh-place finisher Victor Lee piloted a Crate Late Model. … The race was slowed by four cautions. … The first yellow flag waved on lap 18 when Steve Elliott slowed in turns one and two; Jeff Watson and Jeff Neubert tangled in turns one and two to draw a caution on the ensuing restart. … A yellow flag flew on lap 20 when Watson slowed on the fronstretch with nose damage. … Running among the top-three, Zack Dohm slowed in turn four to draw the final caution on lap 39. … The 59-lap feature paid tribute to the late central Kentucky racer who piloted the No. 59. … Fourth-place finisher Devin Gilpin was the winner of the modified feature.