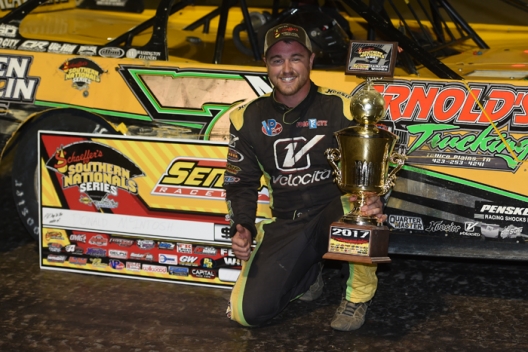 The yellow flag for the slowing car of Michael Page of Douglasville, Ga., erased a 1.422-second lead that the dominant McIntosh had built over Brandon Overton of Evans, Ga., during the first 30 laps of the 35-lap main event.

With Overton directly behind the leader on the restart with just a handful of laps remaining, McIntosh, of Dawsonville, Ga., thought Thursday’s race could have a similar ending to the March 25 Spring Nationals race that he won when the two drivers exchanged sliders in the final lap. McIntosh, who led the first 30 laps in that March race, went on to win that battle. With the roles reversed on Thursday, however, he felt a bit uneasy.

“(I was) worried on that restart with five to go that it might go the opposite of the way that it did in the spring,” McIntosh said. “Unfortunately, leading you don’t know where to go, so I started out in the middle and that’s kinda where I stayed. I had to get to the bottom to get around a couple lapped cars and I’m not real sure that that wasn’t the place to be so that’s where I went. And it started taking a little bit of rubber so I got to the bottom and it worked.”

McIntosh eased into turn one and eased away from Overton, becoming the first repeat winner on the Schaeffer’s Oil Southern Nationals Series this season. McIntosh completed a perfect night on the slippery central Georgia oval. He set the overall fast time and led all 35 laps en route to a victory worth $3,500.

Surviving the caution with five laps remaining — the only yellow flag of the night — McIntosh outran Overton, the series points leader, by .503 of a second. Shanon Buckingham of Morristown, Tenn., took advantage of the late caution to take the third spot away from Riley Hickman and Shane Clanton of Zebulon, Ga., finished fourth as he shuffled Hickman, of Ooltewah, Tenn., back to fifth with two laps remaining.

Overton, who had a spirited battle with Hickman for the second position before finally clearing him on lap 17, said there was little he could do, even after the caution flag allowed him to close to with inches of McIntosh on the restart.

“It took me about 20 laps to pass Riley (Hickman),” Overton said. “If you miss that rubber on either side, you can’t go anywhere. Congratulations to Donald he did a hell of a job. He didn’t mess up. That’s all there is to it. We’ll take it; it’s a good points night. $3,500 ain’t much money to run somebody over. We’ll just go on to the next one. We’re going to some places that I’m pretty familiar with, so it’ll be good to go back home and we’ll see what we’ve got tomorrow.”

From his starting spot in the inside front row, McIntosh led the race from the green. He tiptoed into the first corner and then slid up in front of Hickman to assume command. The leader caught lapped traffic on lap nine, but still managed to grow his advantage. By lap 20, his lead ballooned to nearly two seconds. He was slowed only by the lone caution. While McIntosh didn’t need to slow down, Buckingham, who started fifth, took advantage of the late-race break to grab another spot.

“We’re just happy to be up here on the straightaway getting a podium finish,” said Buckingham. “I got on Riley a couple of times and then (we caught) the lapped cars and I had to do something a little different and he got away from me, so I was actually glad to see that caution. I felt like I could gain another spot. I’m pretty happy with were we finished. We’re steadily climbing the ladder. We’re getting there; we’re putting ourselves in position. If we keep doing that, we’ll come home with a win.”

The first call for Super Late Models to head to staging was made ay 8:58 p.m. The four-wide parade lap saluting the Senoia crowd rolled at 9:13 p.m. … Thursday’s race takes competitors to their fourth state in four events. … It’s the series’ first-ever visit to Senoia. … With 37 entries, tonight’s event is by far the biggest car count through four races thus far. The opener at Wythe Raceway in Rural Retreat, Va., drew 28, with Tri-County Racetrack in Brasstown, N.C., getting 23 and 411 Motor Speedway in Seymour, Tenn. pulling in 29. … With the field set for 22 starters, a number of quality cars are loaded up, most notably defending track champion Clint Smith of Senoia, who ran fifth in his heat and missed the transfer by one spot. Others who are finished for the night include Zach Leonhardi, Jason Fitzgerald, Travis Pennington and Shane Tankersley. … At 6:10 p.m., it was reported that series regulars Kenny Collins, Brandon Overton and Donald McIntosh were stuck in traffic as they tried to negotiate their way through the metro-Atlanta area. Collins and Overton arrived in time for hot laps. Riley Hickman was a late arrival as well. It didn’t seem to effect any of them as they all raced their way into the main event. Hickman qualified first in his group without making any practice laps. … After a day off, Southern Nationals competitors were greeted with typically hot weather as they arrived at Senoia Raceway, in the metro-Atlanta suburbs about 30 miles southeast of the big city.

From outside of row one, Steve Casebolt beat polesitter Kenny Collins into turn one and led all 10 circuits to claim a win in the fourth heat race. Once in front, Casebolt worked the middle to the bottom of the track to protect his lead and ran relatively unchallenged to a 2.165-second win over Dalton Cook, who shuffled Collins back to third just past the halfway point. Collins settled into third and finished in front of Trey Wood, who took the final transfer spot in front of Jason Fitzgerald.

Third-starting Craig Vosbergen used a mini slider at the exit of turn four to grab the lead on the opening lap and went on to win the third heat. Running the low line around the slippery 3/8th-mile oval, Vosbergen squeezed his car between the inside wall and race leader Glenn Morris and then slid up in front of Morris as they hit the front stretch. Vosbergen led flag-to-flag to win the heat, with Morris holding off Jake Knowles for third. Ryan Crane slid into the fourth and final transfer spot.

Shanon Buckingham turned back a slider by Michael Page on the first lap and went on to win the first heat of the night. Buckingham led the first lap, barely nipping Page at the stripe. He then pulled away to win comfortably, claiming a victory by 3.854 seconds over Page. Jason Hiett sipped by Austin Horton for third midway through. Horton hung on to claim the fourth and final transfer spot.

Donald McIntosh of Dawsonville, Ga., set the overall fast time with a lap of 15.839 seconds as one of only two drivers who managed to dip into the 15-second mark. Series points leader Brandon Overton of Evans, Ga., was the other, as he stopped the clock at 15.931 seconds. Both drivers went out in Group A. They are locked into the main event and will start on the inside row in first and third, with McIntosh earning the pole. In Group B, Shane Clanton of Zebulon, Ga., went out first and set the bar at 16.070 seconds. That stood for 16 cars until Riley Hickman of Ooltewah, Tenn., went out and set the fast time in Group B with a mark of 16.068 seconds. Hickman will start the feature from out side row one, while Clanton will roll off from outside row two.

The fourth round of the Schaeffer’s Oil Southern Nationals hits Senoia Raceway, a 3/8th-mile oval with a gray gumbo surface, owned and promoted by the Massey family.

Brandon Overton of Evans, Ga., enters the fourth race as the points leader. He has a single victory, while Vic Hill of Mosheim, Tenn., and Donald McIntosh of Dawsonville, Ga., each have a lone wins as well.

The Super Late Model program includes hot laps, time trials, heat races and a 35-lap main event. Entries will be split into two groups for time trials with the top two qualifiers from each group earning first- and second-row starting spots for the main event. Heat races will set the remainder of the lineup.