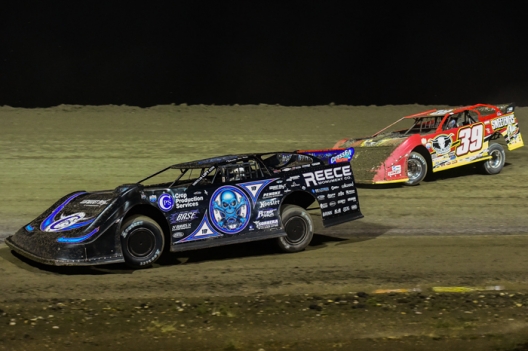 ABERDEEN, S.D. (July 19) — With his season on the ropes following a July slump that wiped out his 235-point lead in the Lucas Oil Late Model Series, Scott Bloomquist did what few drivers do better. He got off the mat and answered the bell. In dire need of a win, the defending series champion got just that Tuesday night.

Bloomquist, of Mooresburg, Tenn., passed leader Tim McCreadie on lap 17 and eventually came out ahead following a dandy mid-race, lead-swapping battle with the Watertown, N.Y., driver. Bloomquist went back in front for good on lap 36 and led the final 14 circuits to win the Bullett Sportswear Shootout at Brown County Speedway in Aberdeen, S.D., collecting his sixth series win of the season and first since May 23 at I-80 Speedway in Greenwood, Neb. Bloomquist’s series-leading 83rd career victory was worth $10,000.

Josh Richards of Shinnston, W.Va., survived an early tangle with Darrell Lanigan of Union, Ky., and advanced from his ninth starting position to finish second. McCreadie gave up the second spot to Richards on lap 42 and settled for third. Hudson O’Neal of Martinsville, Ind., ran inside the top five all night and was rewarded with a fourth-place finish, while Brandon Sheppard of New Berlin, Ill., finished fifth after winning the consolation race and starting well back in the 17th spot.

“We’ve had a problem with (carburetor) vapor locking and dropping out of races. You know we’ve dropped out of four ‘em,” said Bloomquist. “We had a good point lead. We had a decent point lead and it all went to … it all went to the you-know-what-house. We’re just glad to be back on top here tonight.”

With two-thirds of the season complete and what was once a sizable points lead flipped into a 220-point deficit entering Tuesday’s race, Bloomquist needed a turnaround. His July has been most uncharacteristic. While Richards won four of the eight races as the series headed to South Dakota, Bloomquist labored wearily in mid-pack with an average finish of just 10.4. And in the four races that Richards won during that stretch, Bloomquist’s average finish was a dismal 14th.

As the Lucas Oil series made its way to Brown County for its first-ever race in South Dakota, Bloomquist was able to flash more speed, however. And more importantly, he was able to finish. Bloomquist was the fast qualifier in his group — he had the second fastest time of the night — he won his heat race and then outdueled McCreadie just past the halfway mark of the main event.

“I got a good rhythm going up there (at the top of the track),” said Bloomquist. “There’s a couple of rough spots in one and two. But if you hit it right, and I felt like I could really get off the corner and just carry momentum. I didn’t really want to play the stop-and-go race on the bottom. Then we could even run the middle a little bit in (turns) three and four. I’ll have to watch the replay to see how close they were to see if I was doing the right thing or not. Obviously we did something right or we wouldn’t be here.”

McCreadie, looking for his third series victory of the season, led the first 16 laps from the pole. Then during the next 19 circuits he was engaged in a spirited battle for the top spot. He repeatedly turned back Bloomquist’s advances, often taking the lead as they raced down the backstretch, only to have Bloomquist nose back ahead at the flag stand.

“It just got where I couldn’t steer as good through the center. I think I felt like we were a little bit of a sittin’ duck, and I was right,” said McCreadie. “We went back and forth and I got him back on the top. But I was really comfortable and they just kinda splashed a little water out there and it just got where you couldn’t stay low enough off of (turn) four.”

McCreadie was trying to hold off Mike Marlar of Winfield, Tenn., when the final caution flag waved on lap 41. The caution helped Richards, who was up to fourth. On the restart he drover under Marlar and then when after McCreadie. He grabbed the spot a lap later. Bloomquist eased out to a 1.389-second lead over Richards. Though Richards cut into the deficit briefly in the waning laps, Bloomquist extended his margin to 1.431 seconds at the finish.

“Those first few laps were a little harry. I got into Darrell (Lanigan) there. Everyone was jammed up there in that bottom,” said Richards. “I feel back it spun him. We got reset and it looked like it was just gonna be one lane around the bottom. Then about halfway through, once that bottom got a little bit of black above it then you could move around. If we could restart the race again at the end, I think it’s be really good. We just moved around and was able to get by Mikey and Timmy there at the end. It feels like if I hit it right I could gain on Scott a little bit. Once you’re out in clean air, he did a good job and did what he had to do.”

Notes: The race was co-sanctioned by the Lucas Oil Midwest LateModel Racing Association. The win was Bloomquist’s fifth career MLRA triumph. … It took awhile to get the race started. Three different accidents involving multiple cars called for complete restarts. … Bloomquist was complimentary of the Brown County oval. “To be able to use this whole race track almost all the way out of the park to the very bottom, I just can’t say enough for this place,” he said. “I’d like to go to a lot of race tracks like this.” … McCreadie agreed. “The track wasn’t very good early, but hat’s off to the crew. It raced a lot better,” McCreadie said. “This is what I remember when I was here last time. Hopefully we come back again next year.” … McCreadie was trying to fend off Bloomquist when he caught the lapped car of Boom Briggs exiting turn four. As the came off the corner, McCreadie caught Briggs in the right rear quarterpanel, spinning him around. The contact caused McCreadie to slow and nearly collected Bloomquist as he narrowly miss McCreadie. “I apologize to Boom,” said McCreadie. “I didn’t really want to get into him and I kinda did and a spun him there, and it didn’t help us. I didn’t really need that there at the time. I kinda need to just keep going.” … Bloomquist feels confident that he has his carburetor issues ironed out. “We did some testing (Monday). We know we’re not gonna drop out of any more races, at least not with the same problem,” he told Lucas Oil series announcer James Essex.