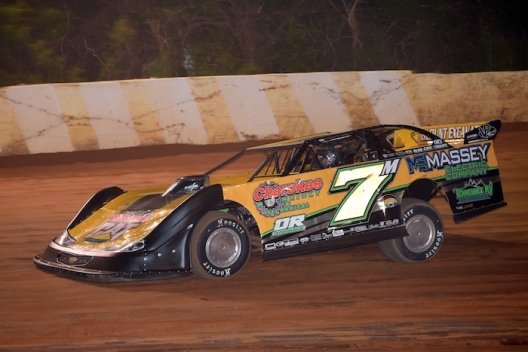 After a lackluster outing in the opener and a flat tire in the second race, the Dawsonville, Ga., driver dominated all 35 laps of the third series race, earning $3,500 while pulling far ahead of his competitors at the 3/8-mile oval south of Knoxville.

The driver for Maryville, Tenn.-based Blount Motorsports credits Rocket Chassis co-founder Mark Richards with phone support that helped crew chief David Bryant and the team get their car ironed out.

“He helped us a ton today. Everything he told us to do, we did, and it helped us leaps and bounds,” McIntosh said. “We’ve been off pretty bad … We came here with a different setup, and like I said, to follow everything Mark said to do. It’s pretty cool, no doubt.”

Jake Knowles of Rome, Ga., took third from a surprising David Doherty of Sydney, Australia, with two laps remaining while Jason Cardwell of Knoxville, Tenn., rounded out the top five. Brandon Overton of Evans, Ga., Monday’s winner at North Carolina’s Tri-County Racetrack who entered the race as the series points leader, struggled to a sixth-place finish.

McIntosh’s biggest challenge most of the race was deftly handling lapped traffic, and he admitted his mind went back to a June 24 race at Florence Speedway in Union, Ky., when a tangle with a lapped car sent him into the wall while leading.

“They told me I had a little bit of a gap, so I didn’t know how much (of a lead) I had,” McIntosh said in the 411 pits. “But I was trying to patient through the lapped cars — some of those guys, you don’t really know where they’re going to be. So you can’t put yourself in a (bad) situation. I put myself in a situation I shouldn’t have about a month ago, so I didn’t want to do that again.”

McIntosh emerged unscathed and should be right in the mix of the points chase with Overton, Casebolt and eighth-place finisher Shanon Buckingham of Morristown, Tenn.

“I hate to say this, but it’s too early to be thinking about points,” McIntosh said. “There’s a lot that can happen. We’ll just try to keep having good runs. I feel like we have a little bit of momentum here. We’ve got our car in the right direction, anyway. We’ll see. The track’s we’re going to run are a lot different than this track. We’ll just have to be on our A-game.”

Two cautions slowed the race that was delayed first by fence damage caused during a preceding feature and then a related light outage in turn four.

The first caution appeared when the first start was scrapped as drivers battling for second came together just before the flagstand with every starter in the second and third rows — David Crabtree, Steve Casebolt, Vic Hill and Riley Hickman — spinning in unison into the infield. Vosbergen and Ferrel Skelton spun behind them.

Crabtree, last year’s series winner at 411 who appeared to blame Doherty for the incident with his upraised arms, retired while Casebolt pitted to replace a flat tire an make repairs, rejoining the field on the tail and racing to a ninth-place finish

The only other caution appeared for Chicky Barton of Middlesboro, Ky., who ran as high as third early but spun in turn four on the 10th lap while running sixth, collecting Craig Vosbergen.

Notes: Each of the past three seasons McIntosh has finished in the top five of Southern Nationals points. … Brandon Overton started ninth but fell back to 11th early in the feature before picking his way up to a sixth-place finish. … Half of the 22 starters completed 35 laps. … Fourth-place finisher David Doherty’s team plan to catch an Uber ride to a hotel because their truck was broken down; he plans to run six more series races. … The start of the feature was delayed because of problems with the turn-four lighting, likely triggered by an earlier delay in the night’s program came when a Crate Late Model crashed into the frontstretch fencing, requiring a 20-minute repair and time for a rescue crew to attend to a fan with minor injuries (she decided to stay and watch the races).

At least one fan was apparently struck by flying debris during the Crate Late Model feature with rescue crews called to the grandstand to assist. A spectator with minor injuries was tended by medical personnel but decided to stay and watch the rest of the races, a rescue crew member said. About 30 feet of fencing was damaged when Jerry Green’s car rode the frontstretch wall out of turn four. A red flag appeared and repairs were made to the fencing during a 20-minute delay. The incident happened about 9:55 p.m. on the race's fifth lap. … Announcers asked fans who were sitting close to the area to move at least 10 rows back for the rest of the program. ... David Doherty of Sydney, Australia, has a golden opportunity for a victory in the United States by earning a front-row starting spot for the Southern Nationals feature. “Maybe I should retire now,” Doherty cracked. He’s driving a No. 25 car housed at the Oxford, Ala., shops of veteran racer Jason Hiett. … Jadon Frame of Winchester, Tenn., had engine problems in hot laps and scratched for the night. He was entering his fourth race in a new Capital Race Car that he steered to victory at Moulton (Ala.) Speedway. … Last year’s race winner, David Crabtree of Maryville, Tenn., is making just his fifth start of the season and first away from Smoky Mountain Speedway. He’d planned to race extensively this season, but a March practice accident at Smoky Mountain knocked one of his Rocket Chassis out of commission and limited his racing.

Chicky Barton survived a slipup betwen turns one and two and edged away for a victory in the final lap. His pursuers had to check up when Barton got out of shape on the second lap, but Barton recovered and kept Jake Knowles in check the rest of the way. Ryan King and Jeff Neubert got the other transfer spots.

Jason Cardwell got the jump on polesitter Steve Casebolt, but Casebolt slid in front of Cardwell in turn four to take command on the fifth lap. Casebolt crusied the rest of the way with Cardwell, Will Roland and Kenny Collins getting the other transfer spots.

Polesitter Shannon Buckingham grabbed the lead from the outset and cruised to victory. Ivedent Lloyd Jr. held second all the way with Billy Ogle Jr., and Austin Neely getting the final transfer spots as the only cars running at the finish. four yellows slowed the action for two spins apiece by Farrel Skelton and Jason Walker.

Outside front-row starter Riley Hickman squeezed through a tight spot between the car of polesitter Brandon Overton and the outside wall in turn two to take command on the first lap and race to an eight-lap victory. Overton kept heavy pressure on Hickman but settled for second with Craig Vosbergen not far behind in= third. Distant fourth-place finisher Jordan Rodabaugh got the final transfer spot in the caution-free prelim.

For the fourth season in a row, 411 Motor Speedway is set to host the Southern Nationals with a $3,500 winner’s purse on the line for the third round of the Ray Cook-promoted tour.

Brandon Overton of Evans, Ga., whose boss Randy Weaver won the tour’s first event at 411 in 2014, leads the series points heading to the 3/8-mile oval near Knoxvillle. Shanon Buckingham of Morristown, Tenn., and Steve Casebolt of Richmond, Ind., are among drivers pursuing Overton in the title chase.

The night’s Super Late Model action includes hot laps, time trials, four heat races and a 35-lap main event. The top two qualifiers from each of two qualifying groups will be locked into the first two rows of the feature lineup with heat races advancing four drivers apiece to the main event. Two provisional starters will fill the 11th row.