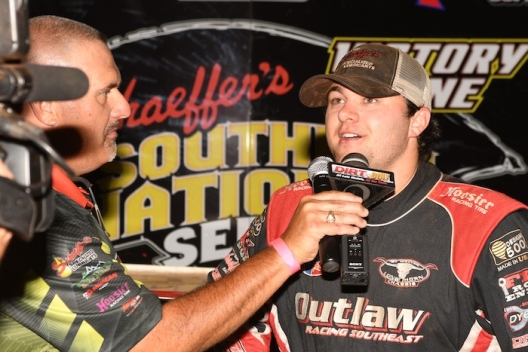 BRASSTOWN, N.C. — Brandon Overton’s first Schaeffer Oil Southern Nationals race ended with his No. 116 slapping the wall in a vain attempt at a last-lap winning pass. The Evans, Ga., avoided a similar scenario Monday at Tri-County Racetrack by making sure no one ever got ahead of him — and it wasn’t close.

The 26-year-old Overton blitzed the 23-car field from his pole position at the quarter-mile oval, flying high around the high side and knifing through traffic to run virtually unchallenged for a 35-lap victory worth $3,500 in the second event on the 11-race miniseries.

In Tri-County’s victory lane, where Overton posed for photos along with the crew members that repaired the Longhorn Chassis damaged in Vic Hill’s Saturday victory at Virginia’s Wythe Raceway, his first-race loss wasn’t too far from his mind.

“I didn’t tear anything up,” Overton said, “so I made up for Wytheville — I hope.”

If the tour’s prohibitive favorite hasn’t completely made up for it, he’s got time with nine series races remaining and the points lead in hand after first- and second-place finishes.

Overton finished 1.567 seconds ahead of sixth-starting Casey Roberts of Toccoa, Ga., at Tri-County,  pulling away from the challenger on two restarts in the final six laps. Shanon Buckingham of Morristown, Tenn., last year’s series winner at Tri-County, finished third with Australian invader Craig Vosbergen in fourth and Steve Casebolt of Richmond, Ind., rounding out the top five.

Donald McIntosh of Dawsonville, Ga., ran second early and held the third spot until being forced to the pits during a lap-29 caution with a flat tire. McIntosh restarted on the tail of the lead lap in ninth and ended up with an eighth-place finish.

Overton notched his 12th overall victory of the season for his Crossville, Tenn.-based Dream Team and scored his second career Southern Nationals victory, mostly riding the high-side cushion at the track operated by series founder Ray Cook, who lives in Brasstown.

“We got our little motor in tonight, and when I’d get on that bottom, that thing would bog down real bad,” Overton said. “I could get down there if I had to, but I’m way more comfortable just ringing around the top of this thing.”

Roberts started outside the third row but didn’t work his way into contention until the race neared the halfway point. He finally got to second but couldn’t do anything with Overton despite restarts on laps 29 and 32.

“Them guys have got their program going real well, congratulations to them guys,” Roberts said. “They earned it there. On that last caution there, something (in the) right front was locking up there with our brakes. We was fighting that a little bit, but we probably weren’t going to run with those guys anyway — those guys are on top of it.”

Buckingham, who started inside Roberts on the third row, was disappointed he didn’t qualify better at the track where he won in his second visit last season.

“We really kind of set ourselves back a little too far to have a chance to win,” Buckingham said. “Heck, I couldn’t even see Overton — he was gone, so I don’t know how good he was.

“But I’m excited to race that good and excited to come out of here with the car in good shape. I really appreciated Casey Roberts driving me clean, and Craig Vosbergen leaving me plenty of room. That’s the way it’s supposed to be on these tight racetracks.”

The feature was slowed by three cautions, including a lap-10 scramble at the top of the frontstretch involving Robby Moses, Ivedent Lloyd Jr. and Jason Welshan, who got the worst out of it and was forced to retire. A lap-29 yellow appeared for a slowing Levi Hicks and the caution lights came on again three laps later when Jason Walker spun inside turn two.

The quickest of 23 qualifiers, Brandon Overton of Evans, Ga., won the pole position for the 35-lap main event. Overton turned a lap of 12.854 seconds, the only driver to crack the 13-second mark.

Because there was only one more car the than planned 22-car starting field, officials elected to use time trials to set the complete 23-car field. Donald McIntosh of Dawsonville, Ga., will be alongside Overton on the front row with Steve Casebolt of Richmond, Ind., and Kenny Collins of Colbert, Ga., making up the second row.

The second round of the Southern Nationals rolls Tri-County Racetrack, a quarter-mile oval where tour found Ray Cook began his racing career. Along with three tours, Cook also operates his hometrack track.

Vic Hill of Mosheim, Tenn., is the tour’s points leader after a single race, and while he’s not expected at Tri-County, Saturday top-five finishers Brandon Overton, Steve Casebolt and Shanon Buckingham plan on following the series.

The Super Late Model program includes hot laps, time trials, heat races and a 35-lap main event. Entries will be split into two groups for time trials with the top two qualifiers from each group earning first- and second-row starting spots for the main event. Heat races will set the remainder of the lineup.