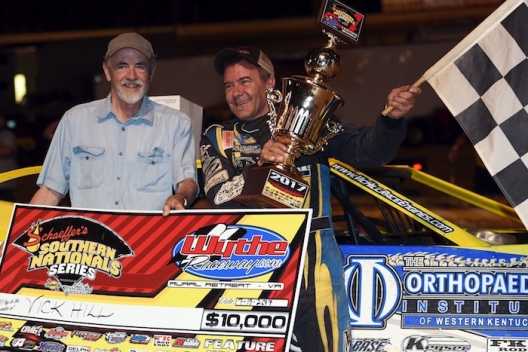 RURAL RETREAT, Va. — Vic Hill was in the habit of losing things Saturday night at Wythe Raceway. First it was his air cleaner (lap 3). Then it was his brakes (lap 45). And on the final circuit (lap 53), Hill very nearly lost the race.

Fortunately the Mosheim, Tenn., driver was able to hang on and win at one of his favorite tracks and pick up a $10,000 paycheck in the Schaeffer Oil Southern Nationals Series opener. Hill, who has six series victories, won the tour’s Wythe opener for the third time in his career.

“It’s just like some racetracks you’re good at, and this is one of ‘em,” the 53-year-old engine builder said after leading the final 31 laps of the 53-lap main event. “We’ve won a lot here. I just love coming here. It’s a high-speed place, but it’s the smoothest big track that I’ve ever run. Normally it’s just really smooth and racy.

“I mean, hell, I started, what, 10th? And I went back to 13th or so on the start because I didn’t want to wreck into anything … then I picked right up through there. You can definitely pass on this place, and that says a lot for a half-mile racetrack.”

Hill, who took the lead when Ross Bailes of Clover, S.C., skittered high between turns three and four on the 23rd lap, fought off a late challenge from Brandon Overton of Evans, Ga., while battling his brake problems in the final laps.

Overton settled for second in the 27-car field while 13th-starting Steve Casebolt of Richmond, Ind., finished third. Shanon Buckingham of Morristown, Tenn., and Johnny Pursley of Clover, S.C., rounded out the top five in a caution-plagued race where several top contenders fell by the wayside.

Besides Bailes falling out of contention after losing the lead to Hill, Chris Ferguson of Mount Holly, N.C. — who muscled under Bailes in turn one on the ninth lap and led through lap 20 — pulled to the pits during a caution period with suspension problems. He retired in the 19th position.

Former series champion Jonathan Davenport of Blairsville, Ga., whose Barry Wright house car team had to to a backup car after he blew an engine leading a heat race, rallied to fourth before going around in turn four near halfway in tangling with a spinning Dale McDowell, who headed pitside after the lap-27 incident. Davenport ended up eighth.

While contenders were falling by the wayside, Hill was motoring his way to the front or pulling away to comfortable leads. He was concerned when his engine’s air filter came off just three laps into the race, but he threw caution to the wind.

“Good thing I’ve got an engine business, right?” Hill said with a smile. “I mean, it’s like 200 laps from a rebuild, and I thought, ‘I’m going to run it.’ I love running this place and I knew our car was pretty good. We kind of messed up in the heat race a little bit, and we started clicking ‘em off and going and going.”

But when Hill lost his brakes, he couldn’t maintain his lap times and a straightaway lead over Overton was erased just before the white flag flew to signify the final lap.

“I just basically tried to run as defensively as I could with no brakes,” Hill said. “Now I knew Brandon would catch me, but it’s really hard to pass at this place unless you really just screw up bad. We got a little lucky, too.”

Overton’s final bid to overtake Hill in turn four on the final lap ended with Overton getting out of shape, although he recovered to hold onto second.

“I was probably trying a little too hard that last lap, but if I’d have made it stick, I’d have looked like a hero,” said Overton, whose Dream Team plans on chasing the Southern Nationals championship. “I guess this is what we’re going to do, so if we keep running top three every night, we’ll be all right.”

Notes: Hill has six career Southern Nationals victories; his previous victory was in the 2015 finale at Tazewell, Tenn. … A dozen drivers completed 53 laps while six drivers were eliminated in the lap-18 fracas. … Travis Greer of nearby Marion, Va., debuted a new TNT Race Car the team picked up on Saturday; the car got banged up on the lap-18 restart. … Jason Johnson of Woodlawn, Va., scratched from racing action after a violent multiple rollover accident in time trials; he climbed out uninjured but his car suffered heavy damage. … Officials announced that additional starters behind the 11th row were required to be within 1.5 seconds of the fifth quickest qualifying time, but they waived the criteria and allowed all competitors to start.

Chris Ferguson led all the way from his pole position, building nearly a half-straightaway lead by halfway and cruising to victory. Shanon Buckingham finished second, far ahead of third-place finisher Billy Hicks. Outside front-row starter Johnny Pursley never recovered from sliding high in turn two on the first lap, and he finished a distant fourth.

Brandon Overton led all the way from outside the front row while Ivedent Lloyd Jr. got second after taking the spot from polesitter Vic Hill between turns one and two on the third lap. Overton won by nearly a straightaway over Lloyd with Hill more than a straightaway ahead of fourth-place finisher Billy Ogle Jr. The race ran caution-free.

Dale McDowell won an eight-lapper where he was arguably the third quickest car. McDowell moved into the lead on the seventh lap when Jonathan Davenport pulled up lame exiting turn four and Dennis Franklin blew a tire. Donald Bradsher and Robby Moses finished second in third behind McDowell in the prelim took a dramatic turn on at the conclusion of the sixth lap as Davenport rolled to the infield with a blown engine and Franklin spewed rubber all over the frontstretch. While Davenport was done, Franklin changed tires and came out to finish fourth in a two-lap shootout to the checkers. The first two starts were called back and officials dropped original front-row starters Davenport and McDowell to the second row behind Franklin and Bradsher.

Polesitter Ross Bailes took command from the outset, edging away from fellow front-row starter Craig Vosbergen over the first two laps and cruising to a victory that earned him the pole position for the 53-lap feature. The Aussie Vosbergen settled for second after fighting off Chris Combs, who finished third in the caution-free prelim.

Vic Hill of Mosheim, Tenn, was quickest among 28 entrants in time trials, tripping the clock at 16.393 seconds at the half-mile oval. The fast lap put Hill on the pole position for the third heat race. Other heat race polesitters by virtue of qualifying: Ross Bailes of Clover, S.C., Dale McDowell of Chickamauga, Ga., and Chris Ferguson of Mount Holly, N.C. Every driver from four eight-lap heat races will transfer to the main event.

All Super Late Model entrants meeting track criteria are eligible to start the opening event on the Southern Nationals at Wythe Raceway, a high-speed, half-mile oval at the Crossroads of the Blue Ridge. The 53-lap feature is one of three $10,000-to-win races on the tour.

The standard 22-car starting field can grow with the addition of other entrants who meet conditions to start the main event. Competitors using all-aluminum engines who have raced at least twice in 2017 and time-trialed within 1.5 seconds of the fifth overall fast qualifier are welcome to join the starting field.

Jason Johnson of Woodlawn, Va., took a wild, flipping ride down the frontstretch during time trials. The car came to a rest on its wheels and he climbed out unhurt just across from the flagstand. ... Hot laps started about 8:30 p.m. ... Wythe promoter Fred Brown said overnight rain dumped 1.5 inches of wet stuff on the track ending about 6:30 a.m., but perfect weather thereafter assisted his crew whipping the track into shape. "It stays smooth," Brown said while sitting behind the wheel of a water truck. "That's what we work on is keeping it smooth." ... After drawing just 15 cars for its 2015 event, Ray Cook and Fred Brown shifted the race to Saturday, bumped the purse to $10,000-to-win and added the provision that allows all entries to feature. … The race drew 26 cars last season with Dale McDowell grabbing the five-figure victory. … Cook announced 48 hours before the race that the series won’t allow air dumps and air shocks for the 2017 season. Cook said the decision was made, in part at the request of competitors, to limit costs of the latest shock technology. … While last year’s series champion Devin Gilpin of Columbus, Ind., isn’t expected to compete on this year’s tour, his replacement in the Jim Beeman-backed MasterSbilt house car, Steve Casebolt of Richmond, Ind., is among several drivers planning to tackle the series. ... Ivedent Lloyd Jr. of Ocala, Fla., who is tackling the series with Ocala-based Big Frog Motorsports, joked when registering that he needed crew help even before he'd turned his first lap. "We've got 25 cases of Busch Light and left all the gas at home," Lloyd cracked.

Correction: Fixes Davenport had a blown engine in his heat race.