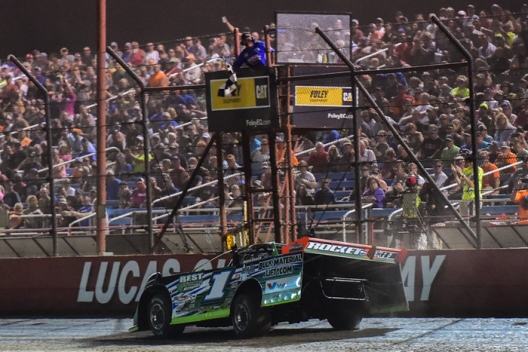 WHEATLAND, Mo. (July 15) — It’s been a gem of a July for Josh Richards. During the busiest Lucas Oil Late Model Dirt Series month of the 2017 season, no driver has shone quite as bright as Richards. That sparkle continued Saturday, as the Shinnston, W.Va., driver won the 11th annual CMH Diamond Nationals at Lucas Oil Speedway in Wheatland, Mo., a race co-sanctioned by the Lucas Oil Midwest LateModel Racing Association.

Owens, a four-time Diamond Nationals champion, spun with three laps remaining while trying to run down Richards and slid all the way back to 15th at the finish after leading nearly 90 percent of the main event.

Sixth-starting Don O’Neal of Martinsville, Ind., improved four spots to finish second and his Clint Bowyer Racing teammate Darrell Lanigan finished third after starting fourth. Hudson O’Neal of Martinsville, Ind., the runner-up’s son, started on the front row and battle among the leaders throughout the race before slipping to fourth, while homestate driver Jesse Stovall of Galena finished fifth after starting 10th.

Starting on the fourth row, Richards methodically marched forward. He entered the top five on lap 14 and then chased Hudson O’Neal for 23 laps before finally taking the second spot.

“I knew I could get a good run if I hit it just right,” added Richards. “(Owens) got up to (Brian) Shirley there and tried the outside and we were just in the right place at the right time and able to make the pass. I felt like we were starting to make (up) some ground on him anyway. I don’t know if we could’ve got him or not … he did a great job. We’ll take it for sure.”

After winning just one series feature during a 16-race stretch running from March through June, Richards has now reeled off four wins in eight races so far this month. And there’s still three races remaining in what is the series’ most congested month. Richards’ recent success comes on the heels of the tour’s slowest month, a one-event June that saw Richards compete in only the single race.

He also displayed marked improvement from his first visit to Lucas Oil Speedway during the Show-Me 100 weekend back in May. Richards failed to transfer into the feature on the first of two preliminary nights and he finished fifth on the second — both were non-point-paying races. He then finished ninth in the Show-Me 100.

Following Saturday’s breakthrough victory at the speedway, he said there hasn’t been a single catalyst to his turnaround that has allowed him to erase the 235-point deficit he had to then series points leader Scott Bloomquist of Mooresburg, Tenn., when they left Wheatland following the Show-Me 100.

“I think just everything together,” said Richards, who currently enjoys a 220-point lead over Bloomquist in the standings. “Everything’s got to work together to make this happen. You know, the chemistry with the team, the car and everything. We’re just trying to make the right decisions and be smart. We’ve been having a lot of curveballs with the tire rules and stuff throughout the different tracks, but it’s made it a lot of fun.”

Don O’Neal’s runner-up finish was a big improvement from his Show-Me 100 finish as well. He finished 20th and third in the prelims before struggling to 15th in the Memorial Day weekend crown jewel. He was pleased with the progress.

“It’s definitely a lot better showing than when we came here for the Show Me,” said O’Neal, who nearly lost the second spot on the lap-57 restart. “I got a good run coming down this front straight away and I went into turn one and I missed that little moisture strip and got hung out there really bad. I figured I was gonna lose a few spots, but I hung in there for second.”

Lanigan went from fourth to third in the last three laps. He almost got around his teammate for second, but had to get back in line to hold off Hudson O’Neal in order to claim a podium finish.

“I knew we had a little bit better car than that but just got hung up down there on that bottom on that concrete and cleaned our tires off there and got going a little bit there,” said Lanigan. “The power steering was actually going out (during) that last caution. I (thought) ‘you gotta be kidding me, something else is gonna break.’ But we managed to hold it in there and finish third.”

Notes: The race marks a stretch of three straight events the two series will co-sanction. … Josh Richards enjoyed his second trip to Wheatland. “It’s awesome,” he said. “This is a premiere facility and it’s just cool to get to race here. The track was on par tonight, so it was a lot of fun.” … Richards also won Friday at Tri-City Speedway in Granite City, Ill. ... Richards scored his first career MLRA win. ... The race was slowed by just one caution. … It took 21 minutes, 35 seconds to complete the feature. … Newest Gressel Racing hire Jake O'Neil finished eighth. ... Continuing a recent stretch of quiet performances, Scott Bloomquist placed 12th. ... Hudson O'Neal outdueled his father, Don O'Neal, in an entertaining third heat race. ... Wheatland's final Late Model special event of the season is the MLRA Final Nationals, scheduled for Oct. 6-7.