Information provided by: Series and track reports (last updated July 15, 9:48 am)
Richards rolls on in July, leads 50 laps at Tri-City
NAPA Know How 50 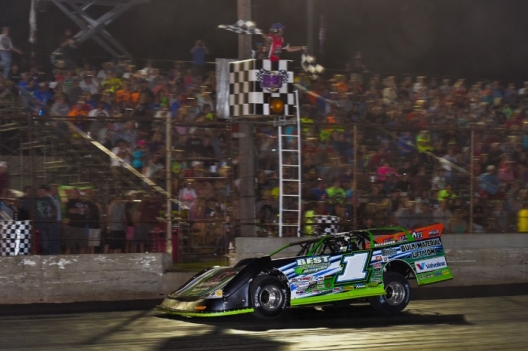 Series points leader Josh Richards of Shinnston, W.Va., grabbed his third flag-to-flag victory of the year’s seventh month, dominating from outside the front row at Tri-City Speedway for a $10,000 victory.

Richards has been superb in July, never finishing worse than fifth in seven series starts while erasing Scott Bloomquist’s huge lead and taking command of the series points chase in his No. 1 for the Ohio-based Best Performance Motorsports team.

At Tri-City, Richards turned back challenges from Tim McCreadie of Watertown, N.Y., on two restarts over the final eight laps, dancing on the treacherous high-side cushion to the checkered flag at the 3/8-mile oval near St. Louis.

The seventh-starting McCreadie finished nine-tenths of a second behind at the finish with ninth-starting Don O’Neal of Martinsville, Ind., grabbing the third spot. Polesitter Brian Shirley of Chatham, Ill., who was running second when the cushion tore away the right side of his car’s nosepiece, salvaged fourth and Jimmy Owens of Newport, Tenn., rounded out the top five.

Bloomquist, who started 20th after his team arrived just before the start of the heat races, struggled to a 20th-place finish to fall farther behind Richards in the points chase.

Starting outside the front row was the desired spot for Richards, who found his car’s handling a bit tight on the track’s layout.

“Qualifying was really key,” the 29-year-old Richards said. “We just hit it just perfect and got fast time for our group, which put us in a spot for the heat race to get the outside pole, so I think that was key tonight.”

Richards cruised out front with a relatively comfortable cushion most of the 50 laps, but he had some dicey moments on restarts while tightroping on the cushion.

“My biggest worry on the restarts was slipping up in (turns) one and two and having them slide in front of me, because it was a little hairy getting through there,” Richards said. “Every time you’d get through on a restart and then (build) a gap, then you felt more comfortable. I just tried to enter wide into (turn) three and come down. We were a little snug, but we were able work the track and make it work.”

McCreadie took a few shots at Richards late, but he was pleased to secure a runner-up finish.

“We’ve had a fast car since we unloaded … we want to win, but we’ll take second,” the New Yorker said. “It was real hard to pass tonight. It wasn’t the easiest track to maneuver on. We were just a little flat in the corners. …. I’d get arc’d in right and stay activated (in the corners), and I’d just relax a little, whether it was the nose coming off the right front or whatever it is, we’ve gotta go back to the notes and look at it.

“We’ve had this same issue a little bit, but we’re working on it. We made it better tonight. A lot of things we did tonight, I thought it was a very balanced race car until it got so shiny that you’d wouldn’t steer.”

Six uneventful cautions slowed the action, including on lap 32 when debris from Shirley’s car drew a yellow flag.

Notes: Richards scored his first series victory in Illinois. … His previous three series victories came in Ohio. … Besides the lap-32 yellow for Shirley, cautions appeared on lap 5 for Billy Drake’s spin, and twice on lap 18 for Jeff Herzog and then Gregg Satterlee getting into the wall. Rick Salter, making his first Lucas Oil start, spun on lap 43 and Darrell Lanigan slowed for the final yellow on lap 45. … Running black cars most of his career, Darrell Lanigan unveiled a white car for Clint Bowyer Racing. …   Eighteen of 25 starters finished on the lead lap.