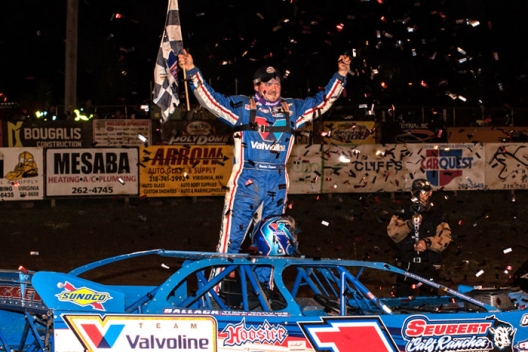 HIBBING, Minn. — While putting a stop to one short streak, Brandon Sheppard simultaneously extended a much longer one.

Sheppard, of New Berlin, Ill., continued his red-hot season by picking up his ninth World of Outlaws Craftsman Late Model Series victory of the year Thursday night at Hibbing (Minn.) Raceway. The series points leader overtook race-long leader Chub Frank of Bear Lake, Pa., with two laps remaining and went on to win by .940 of a second.

While Frank saw his series winless streak continue, Chris Madden of Gray Court, S.C., finished a quite sixth as his brief win streak — back-to-back tour wins in Minnesota — came to a halt.

The sixth-starting Sheppard, meanwhile, made no apologies for playing the role of spoiler. After running in the top five for the first half of the race without threatening the top spot, Sheppard took advantage of a caution for a slowing Eric Wells — the only caution of the race — with five laps remaining to ruin what looked to be a drought-busting victory for Frank.

With Frank hugging the bottom groove on the restart, Sheppard, who was running third, headed to the top shelf. He dispatched Marlar and then bird-dogged Frank, making the pass for the lead as they raced down the backstretch with just two laps remaining.

“I didn’t know how many laps were left there. We were hoping for a double-file restart,” said Sheppard. “Mikey and Chub, they both had really good cars also. We just got lucky and got a really good run on Mikey coming down the frontstretch here and were able to get in front of him getting into (turn) one.

After leading the majority of the race, the third-starting Frank had nearly a one-second advantage over Marlar when the lap-35 yellow appeared. Committed to the bottom throughout, he was leery of the restart.

“The bottom was starting to give up a little bit. On that restart I knew somebody would try the outside,” said Frank. “You know Brandon, he’s definitely gonna … I thought Marlar was gonna. (I knew) him or Brandon was gonna be up there. I knew I couldn’t come off (the bottom). There no way you can go up there and run there when you’ve run thirty-something laps on the bottom. I just tried to make it stick and he just got a good run up off the cushion. He did a hell of a job.”

While disappointed he was unable to hold on for a win, Frank was happy with the performance of his car after struggling a bit a night earlier at Ogilvie (Minn.) Raceway.

Despite getting shuffled from second to third over the final five circuits, Marlar was happy with this finish as well, especially considering his team changed engines in his car earlier in the day.

“The track got really racy there. We got to run to on the bottom for awhile and then on the outside and through the middle early … real racy,” said Marlar, who started fourth in the main event. “Congratulations to Brandon and Chub. Chub did an awesome job. He probably just didn’t know to move out. He was running that bottom the whole race and it ended up getting him.”