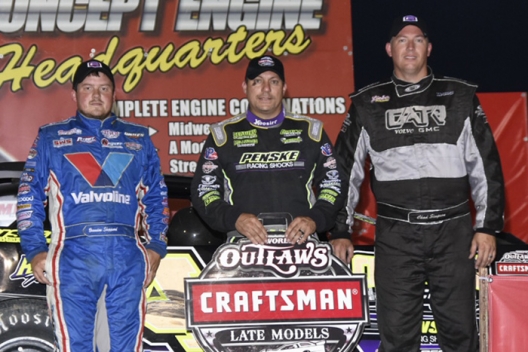 OGILVIE, Minn. (July 12) — The state of Minnesota has a lot of nicknames. Among them, the Land of 10,000 Lakes and the Gopher State are two of the most popular. Minnesota is also known as The Bread and Butter State, likely with much less popularity. Unless you’re Chris Madden that is. For Madden, Minnesota is where his World of Outlaws bread has been getting buttered lately.

Four days after recording his first-ever series win in the state, Madden, of Gray Court, S.C., made more Minnesota memories with a win at Ogilvie Raceway. Madden passed race-long leader Brandon Sheppard of New Berlin, Ill., with four laps remaining and went on to win by 1.502 seconds Wednesday night. He earned $8,000 for the victory.

Sheppard, who paced the field from the drop of the green, settled for second, while Chad Simpson of Mount Vernon, Iowa, finished third. A pair of series champions — Rick Eckert of York, Pa., and Shane Clanton of Zebulon, Ga. — completed the top five.

“We’ve has some speed in our car all through the year, we just never could put everything together,” Madden said. “We’ve had some bad luck, broke some drive shafts, (had) a couple of engine failures. But other than that, we’ve been pretty good … just hadn’t been able to finish it.”

The fourth-starting Madden finished with a flourish on Wednesday. While Sheppard rolled up to the top of the track and blasted off the cushion at the start, Simpson, Clanton and Madden battled for the second position. Simpson slipped back to fifth in the first 10 laps, while Clanton moved forward one spot into second. Madden dropped Clanton  back to third on lap 15 and began his pursuit of Sheppard.

When the race’s only caution waved for debris on the backstretch on lap 20, Sheppard led Madden, Clanton, Eckert and Simpson. Madden was within .843 of a second off Sheppard’s rear deck when the caution came out. Tyler Erb, Frank Heckenast Jr., Devin Moran, Eric Wells and Dustin Strand rounded out the top 10 at the halfway mark.

“We had a pretty good race car. I just got into the wall there about halfway through the race,” Sheppard said. “I think that’s what that debris was for, was off my car. Once we lost the spoiler, we got a little bit loose. I don’t think we had the right tires on either, but we’ll take it and move on to tomorrow night.

Sheppard still led after the caution, edging away by 1.5 seconds with just eight laps remaining. But Madden started cutting chunks off the advantage and when Sheppard jumped the cushion in turn one with four laps remaining, Madden was there to pounce. Madden drove by and pulled away, leading the final three circuits.

“I can’t thank my guys enough that works on this thing hard to make sure nothing falls off,” Madden said. “We’ve got some tough guys to race against. I love racing with that Brandon (Sheppard). He’s a hell of a wheelman. That kid’s got a big future ahead of him.”

Like Madden, Simpson made a late-race charge of his own. After falling back to fifth, he rallied back by Clanton and Eckert, who ran as high as third, to snare a podium finish.

“It’s a win for us and this team right now,” said Simpson. “We haven’t raced a whole lot this year. That’s why we’re up here now is to try to get some races in and try to get a feel of this car. That’s the best we’ve run in it here this year, or the best I’ve felt in it, so we’re headed in the right direction now.”

Notes: Madden earned his 12th career WoO feature win, moving him into a tie with Clint Smith of Senoia, Ga., and Shannon Babb of Moweaqua, Ill., for 12th on the tour’s all-time win list. … Madden most recently won at Deer Creek Speedway in Spring Valley, Minn., on July 8. … Of the 21 finishers, 18 were still on the lead lap. … Jimmy Mars of Menomonie, Wis., made a single lap before retiring. … Justin Duty of Mulino, Ore., fell off the pace and pulled in on lap 16. … Pat Doar of New Richmond, Wis., parked his car on lap 17. ... Ricky Weiss of Headingley, Manitoba, scratched from the feature event.