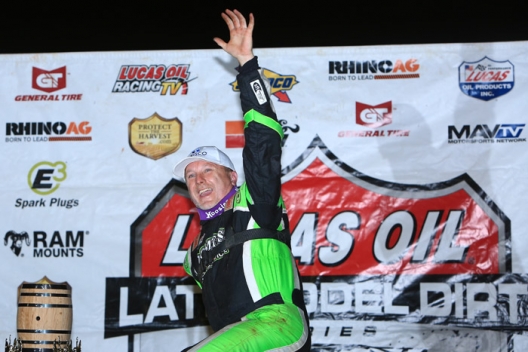 MARYVILLE, Tenn. — Saturday afternoon rain that hit Smoky Mountain Speedway provided a racing surface that suited Jimmy Owens just fine. His only real concern after leading all 60 laps of the Mountain Moonshine Classic for his second Lucas Oil Late Model Dirt Series victory of the season was getting his rig back home.

“The track’s in great shape — I can’t say much for the pits, though, on account of we’re going to have to get a wrecker to pull us out of the mudhole back yonder — but the track was awesome,” the three-time series champion said with a smile in victory lane.

The 45-year-old Newport, Tenn., driver pulled away from polesitter and fellow front-row starter Ray Cook at the outset and stayed out front all night long on the 4/10-mile oval, keeping series points leader Josh Richards of Shinnston, W.Va., in check in the first half of the race and staying safely ahead of a late charge from Brandon Overton of Evans, Ga.

"I’ve gotta thank my crew,” Owens said in victory lane. “Everybody’s worked their butts off. You know, we’ve been away from home for the last week or two trying to get things sorted out, and it’s good to know a lot of hard work has paid off for the crew and everybody.

“Usually the high side around through here is a pretty good deal, but the weather just made the track almost perfect tonight. You could run high or low or anywhere you wanted to.”

Overton, the tour’s winner the previous night at Cherokee Speedway in Gaffney, S.C., finished 2.4 seconds behind Owens in second while Scott Bloomquist of Mooresburg, Tenn., finished third. Richards settled for fourth and Darrell Lanigan of Union, Ky., rounded out the top five finishers in the national touring event.

Owens ran unchallenged in the second half of the race, but Overton worked his way past Bloomquist and then Richards in the final 10 laps, trying in vain to track down Owens in the race’s waning moments. Owens felt like he had a little more in the tank.

“I think we had a pretty good hot rod. I think we could’ve took care of him,” Owens said. “You never know. I’m glad there was no caution and we didn’t have to deal with it.”

Overton wouldn’t have minded to see a late caution to set up a late-race showdown, but he didn’t play the “what if?” game in his postrace interview.

“We had a pretty good hot rod, you know, we just kind of got going a little too late there. It would’ve been fun. I don’t know if we would’ve passed him ... you know, you never want to say that, but like I said, I know we would’ve put a show on for ‘em, at least.”

The eighth-starting Overton thought immediately after the race that a brake line or other issue hampered his Dream Team No. 116.

“I had to start entering (turn) three real crooked,” Overton said, adding that he had to pump his brake pedal late in the race to get it working. “But all in all, it’s hard to start — this is the best in the business — to start back there and come up through there.”

Bloomquist, who just a few weeks ago held a commanding lead in the series points but has since fallen behind Richards in the title chase, had his first podium finish on the series since May 25 and finished ahead of Richards for the first time since May 28.

“We just got a little bit tight late in the race and just kind of had to hang in there. We got by Richards … at one time it looked like we were coming on, and then we picked up a push and we just had to live with it,” Bloomquist said, adding that he hopes he’s put a stretch of struggles behind him. “Hopefully we can get back on track now.”

Notes: Owens has two Lucas Oil victories in 2017, both in Tennessee; he won at Tazewell Speedway on May 7. … A lap-six caution for a slowing Steven Roberts was the feature’s only slowdown. … There were no changes in the top 10 in series points after Smoky Mountain with third-place finisher Josh Richards holding a 20-point lead on Scott Bloomquist before the tour heads to the Midwest for five races in the second half of July.