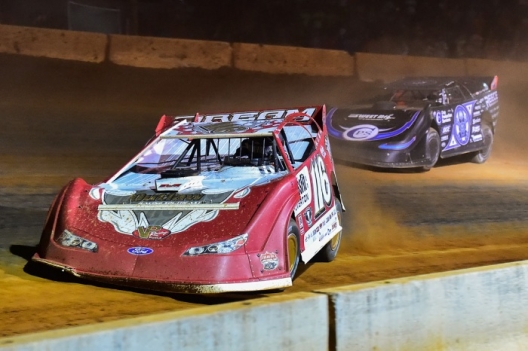 This time Overton was the driver who made a winning pass in the closing stages at the 3/8-mile oval, coming from the sixth starting spot to overtake race-long pacesetter Jonathan Davenport of Blairsville, Ga., for the top spot on lap 41 and capture the national tour’s 50-lap A-main.

Overton’s $10,000 triumph erased memories of his near-miss at Cherokee on June 20, 2014 — his last start at the track under the Lucas Oil banner — when he led laps 3-35 before relinquishing control to eventual winner Don O’Neal of Martinsville, Ind. The 26-year-old sensation finished second that night for what at the time was his career-best performance on the Lucas Oil Series.

In addition, the checkered flag was Overton’s 11th in 39 starts this season with Chip Stone’s Dream Racing team. The victories have come at 11 different tracks in eight states and under seven different sanctions, including two in Lucas Oil Series competition.

“I’ll tell you what, I’ve got the best damn team in the business,” said Overton, whose fifth five-figure score of 2017 pushed his first-place earnings for the season over the $100,000 mark. “These guys will never give up. After that heat race (a runner-up finish to Davenport following a hard-fought battle), we didn’t give up. We knew we had a pretty good hot rod … and we made the right tire call (for the feature).

Overton steered his Longhorn by Weaver across the finish line 1.646 seconds in front of Shinnston, W.Va.’s Josh Richards, who grabbed second place from polesitter Scott Bloomquist of Mooresburg, Tenn., on a lap-19 restart and chased Davenport until giving up the position to Overton on lap 40. Richards finally passed Davenport for second on lap 45, but the Lucas Oil Series points leader wasn’t able to seriously challenge Overton in his first-ever appearance at Cherokee.

Fourth-starter Jimmy Owens of Newport, Tenn., finished third after briefly engaging in a four-race battle for the lead with Davenport, Richards and Overton just before Overton gained command. Bloomquist settled for a fourth-place finish after dropping from second to fifth on the lap-19 restart and seventh-starter Ross Bailes of Clover, S.C., who claimed a $10,000 Southern All Star-sanctioned March Madness win at Cherokee on March 5, placed fifth.

Davenport, who raced off the outside pole to lead laps 1-40 in the Barry Wright house car, fell to fourth soon after losing the lead and ultimately spun into the wall between turns one and two on lap 46 to bring out the race’s third and final caution flag. He didn’t continue and was credited with an 18th-place finish as he remained winless in Super Late Model competition this season.

Overton made a stirring charge through the top five during the feature’s second half, seemingly picking up speed as the cars in front of him began to fall off. His machine’s harder-compound right-rear tire and a very useable outside lane allowed him to execute a strong finishing kick.

The fast-rising star began to turn up the wick after the lap-19 restart that followed a caution flag for Thursday night’s Lucas Oil Series winner at Fayetteville (N.C.) Motor Speedway, Chris Ferguson of Mount Holly, N.C., who stopped in turn four with a flat tire while running third.

“Josh (Richards) and Scott (Bloomquist) kind of got tangled up (on the restart) and I got behind,” said Overton, who was sixth at the time. “I said, ‘Damn, I gotta go now because I’m gonna run out of laps.’”

Overton decided to give the outside lane a shot — and the strategy worked.

“My buddy’s with us and he said, ‘Just go where they’re not,’ and I was thinking, ‘No, you don’t understand. You can’t get out of the bottom,’” Overton commented. “And then once I got kind of bottled up behind Josh and Scott, I said, ‘Hell, I ain’t gonna pass ‘em on the bottom.They ain’t gonna mess up,’ so I just went to the top.”

Overton cracked the top five on lap 21 with a pass of Bloomquist. He took fourth from Bailes on lap 30, shot by Owens for third on lap 34 and squeezed around Richards for second off the outside of turn four on lap 40. Moments later, on the backstretch, Overton cut between Richards and Davenport and vaulted into the lead for good.

“Them guys were giving me plenty of room off of four and I really appreciate that,” Overton said of his late-race moves. “I always keep that in my mind — who races me clean — and I always return the favor.”

Richards, 28, hailed Overton’s performance, but the driver of the Best Performance Motorsports mount wondered if he should have pressed the issue to pass Davenport for the lead earlier in the race.

“I knew (Overton) had a 40 (harder compound tire) on and we all had softer right-rears on,” said Richards, who left Cherokee leading the Lucas Oil standings by 20 points over Bloomquist. “I was trying to be conservative with Jonathan there … I got up to him, and then Brandon found the outside and got back by us. I wish we could’ve got by (Davenport) earlier and held ‘em off.”

The 45-year-old Owens, meanwhile, had a front-row seat for Overton’s race-winning pass.

“That was a heck of a move ‘ol Brandon did off two, wasn’t it?” said Owens, who added that he was concerned about tire wear on his Ramirez Motorsports mount that he steered to his first top-five finish on the Lucas Oil Series since a runner-up in the May 26 Show-Me 100 preliminary feature at Lucas Oil Speedway in Wheatland, Mo.

Notes: Overton joined Brandon Sheppard of New Berlin, Ill., as just the second driver to score multiple wins on each national tour so far this season. His other Lucas Oil triumph came on Feb. 10 at Golden Isles Speedway near Brunswick, Ga., while his two World of Outlaws Craftsman Late Model Series victories were recorded on May 13 at Smoky Mountain Speedway in Maryville, Tenn. — where he will chase another Lucas Oil checkered flag on Saturday night — and June 24 at Lernerville Speedway in Sarver, Pa. … The last seven Lucas Oil features at Cherokee have had different winners: Overton, Bloomquist, Davenport, O’Neal, Chris Madden, Steve Francis and Steve Shaver. … Overton said in victory lane that he wasn’t sure if his car owner Chip Stone had made it to Cherokee for the feature because Stone and his brother, Rusty, were slowed by a flat tire on their vehicle en route to the track. … Fifteen of the 24 starters finished on the lead lap. ... Darrell Lanigan of Union, Ky., was an early retiree after tossing a wheel on lap three to bring out the race’s first caution flag. … Tim McCreadie of Watertown, N.Y., salvaged a 10th-place finish after having to race from behind all night because his fourth-fastest lap in qualifying was disallowed when he weighed in light at the scales.