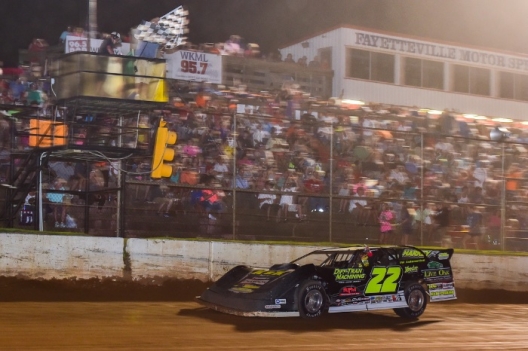 Ferguson enjoyed a simply perfect evening in his home state, setting fast time, winning a heat race and leading every lap of the feature to record his first-ever victory on the Lucas Oil Late Model Dirt Series.

Racing on a half-mile oval that produced little passing from start to finish, Ferguson started from the pole position and controlled the entire distance with little trouble. He maintained a steady edge of about 1 second over Gregg Satterlee of Indiana, Pa., in an A-main that went caution-free from lap 10 to the checkered flag and saw no changes in running order among the top 10 after lap 22.

The $10,000 triumph was extremely meaningful for the 27-year-old Ferguson, who not only erased memories of bad luck in the past at Fayetteville but became the 43rd driver to win features on both the Lucas Oil and World of Outlaws Craftsman Late Model Series.

“This is awesome,” said Ferguson, whose pair of WoO victories came on May 1-2, 2015, at North Carolina’s Friendship Motor Speedway and Fayetteville. “It’s taken a lot to win one of these (Lucas Oil shows). I’ve had so many chances and none go my way, especially like in ’09 when we sat on the pole here and ran second or third.

“This is redemption for all the races I’ve lost here. I’ve lost a lot more leading than I have won.”

Ferguson steered his XR1 Rocket across the finish line 0.995 of a second in front of Satterlee, who recorded his second runner-up finish in the last three Lucas Oil Series events.

Outside polesitter G.R. Smith of Cornelius, N.C., finished third after losing the second spot to Satterlee on a lap-10 restart. Josh Richards of Shinnston, W.Va., started and finished fourth — good enough to push him into the Lucas Oil Series points lead over ninth-place finisher Scott Bloomquist of Mooresburg, Tenn. — and Steve Francis of Bowling Green, Ky., improved one position to complete the top five.

Ferguson experienced few worries during his romp to victory lane aside from some uncertainty working lapped traffic in the closing circuits.

“I wasn’t sure about (Tim) McCreadie there, trying to pass him,” Ferguson related. “Once I knew I couldn’t get to his outside I just had to ride, slow my pace down.”

Satterlee, 32, lurked in second with an eye on an opening materializing to vault him past Ferguson and to his first Lucas Oil Series win of the season, but Fergy didn’t made a race-changing error.

“I was able to keep up with Chris (after overtaking Smith), it’s just at the end it was hard to pass those lapped cars,” said Satterlee, who was worried about a slight motor temperature issue during the heat and feature resulting from the day’s hot summer weather. “I was hoping maybe one of them was going to hold him up a little bit, but just as fast as he could get by them, I could get by them.

“He had a really good car. I was able to keep up, but his car was good and it was going to be hard to pass him unless he made a mistake. A couple of times he bobbled, but I was never able to capitalize on it.”

Ferguson registered just his third victory of the 2017 season, backing up his previous scores in an April 15 Ultimate-sanctioned event at Modoc (S.C.) Speedway and a June 10 Carolina Clash program at Fayetteville. It gave his confidence a huge boost.

“A team like ours, we don’t stop working,” Ferguson said of his family operation. “After we had to head home (from last month’s Dream at Eldora Speedway in Rossburg, Ohio, after Night 2 rather than try to make the feature), we knew not to get down, we knew we were missing it, we knew that everything we had on up there didn’t work, so we kind of went back to what works here.

“We were not content. That’s the good thing about having my dad, my brother, Cory and all them guys — all the people that help us. We’re not content with sucking or being fast. We always want to work to get better and it paid off tonight.”

Smith, 36, felt he let a potential runner-up finish slip through his fingers, but he was upbeat after matching the third-place finish he tallied in a 2014 WoO A-main at Fayetteville.

“I probably was too conservative on that (lap-10 restart, but we were a second-place car, if not first,” Smith said. “You’re so close, and all these (top-four finishers) are Rocket cars with (essentially) the same (caliber) motors and same shocks.

“The car’s been really good,” he continued. “These guys have been busting their butt on it. We were up in West Virginia last week (at Tyler County Speedway in Middlebourne), set fast time, got the invert, got a top-five. Since (crewman) Brian Liverman’s come on, he’s really sped our program up … and I’m just maturing as a driver, slowing down in the race car and not running every lap like a qualifying race. It’s been a good year so far.”

Jonathan Davenport of Blairsville, Ga., who won the last Lucas Oil Series event contested at Fayetteville in 2015, encountered bad luck throughout the evening. He lost a driveshaft in his Barry Wright house car in hot laps and on the opening circuit of the feature, leaving him with a 25th-place finish.