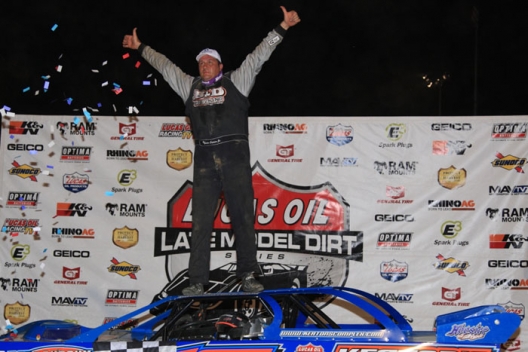 As far as Carrier was concerned, he was due for some fortune to shine on him.

In the wake of a frustrating 2016 season that saw Carrier not only lose his long-running ride with team owner Carl Grover but suffer a broken arm in a July accident soon after landing a new deal with Jake Keaton Racing, the 46-year-old veteran from Salt Rock, W.Va., happily accepted a free pass into the lead of Sunday evening’s A-main on lap 24 when race-long pacesetter Devin Moran of Dresden, Ohio, blew a right-rear tire. The former Lucas Oil Series regular then took full advantage of the break, controlling the remainder of the distance to register his first triumph on the national tour since Feb. 13, 2015, at East Bay Raceway Park in Gibsonton, Fla.

“Everybody knows he was gonna be tough to beat,” Carrier said of Moran, who had led from the initial green flag after starting from the pole position. “I mean, it was gonna take a real good race car to outrun him.

“I think we probably had the second-best car. Maybe Scott (Bloomquist) was better than us (before falling off the pace late), but we’re standing here in victory lane. Sometimes you’ve just got to put yourself in the situation to take advantage of somebody’s bad fortune.”

Fifth-starter Tim McCreadie of Watertown, N.Y., finished third, continuing his remarkable run of consistency on the Lucas Oil Series in 2017. It was his 16th top-five finish in 19 events since the end of February’s Georgia-Florida Speedweeks — six more than any other driver on the tour over that span.

Don O’Neal of Martinsville, Ind. — the second-place finisher’s father — climbed forward from the seventh starting spot to place fourth while Josh Richards of Shinnston, W.Va., advanced from the 14th starting spot to finish fifth. Richards fell short in his bid to sweep the circuit’s Independence holiday tripleheader in Ohio, but he made a strong rally after he was forced to pull out his backup Best Performance Motorsports car and start at the rear of a heat race because a broken oil pump sidelined the machine that he drove fast time in the second qualifying group.

Mooresburg, Tenn.’s Bloomquist retired from the feature on lap 48 due to ignition trouble that caused him to fall from second (and in position to challenge Carrier) to fourth two circuits earlier. He salvaged an 11th-place finish, however, because only 10 cars were running at the conclusion of a attrition-heavy feature that was slowed by eight caution flags, including seven during the race’s first 26 laps.

Bloomquist remained atop the Lucas Oil standings, but only by a narrow margin. He ended the three-race swing leading Richards by 15 points and McCreadie by 30 markers.

Carrier’s triumph came on the heels of his $10,000 Schaeffer’s Oil Southern Nationals Bonus Series score on June 24 at Florence Speedway in Union, Ky. — his first win of any kind since his last Lucas Oil Series success in 2015.

“We got this new Longhorn this winter and we’ve been working on it,” said Carrier, who recorded his ninth career Lucas Oil win. “I’ve just been trying to find things that suit me. I’m not your average-sized driver, so we’ve gotta do little things different. We kind of hit on some stuff at Florence.

“We’re working on way up to where we can compete on a regional deal,” he added. “We can’t travel or nothing … we just try to hit the shows around our house, try to have fun again. I can’t thank Rick and Jake Keaton enough for putting the faith in me to put me in this race car. We’re just a small team but we’re trying to do big things.”

After skipping Sunday night’s Lucas Oil stop at Mansfield, Carrier entered Muskingum County’s action with a confident feeling. He knew his experience at the 3/8-mile oval could be put to good use.

“I’ve had a few laps of here, but this is a tough field of cars,” Carrier commented. “It’s tough to outrun these (Lucas Oil) guys. When they come into your town you might have a little bit of an advantage on ‘em so you’ve gotta take advantage of it, and I’m just glad we were able to do it.

Moran’s misfortune was Carrier’s salvation. Carrier said he noticed that Moran might be developing a tire problem.

“Probably five or six laps before he had the flat I seen him start getting tight like off the corners,” Carrier related. “Usually on one of these cars the car will get a little tight off and try to start picking the left-front up, and I kind of seen that a little bit (with Moran) didn’t know (the tire was about to blow). When we had a caution and I seen it and I thought, Man, that thing looks low, but I don’t know. Then it went.”

The 22-year-old Moran was credited with a 14th-place finish in Tye Twarog’s machine after withdrawing from further competition when he slowed with a flat right-rear tire on lap 24. It was a heartbreaking fate for Moran, who was bidding for a victory at the track owned by his family.

The teenage O’Neal, meanwhile, had Todd Burns’s Club 29 Race Car in contention for the second consecutive night. He spent most of the distance battling for position with the 43-year-old McCreadie.

“He got a good start on me there that last time (restart) and I had to pinch him off a little bit,” O’Neal said. “We got together. I kind of felt bad a little bit, but I was just trying to do what I had to do to run second.

“I tried to get to Eddie, but he was a little faster than I was. I tried everything, and the more I tried, the slower I got.”

McCreadie did pass O’Neal for fourth before a lap-22 caution flag, but after the restart he ceded the position back because he ended up on the inside of the track and never was able to overtake O’Neal over the remaining distance.

“It was hard to go on the bottom on them restarts,” McCreadie said. “Little O’Neal, I passed him out there and I thought, Man, we’ll be good. I never in a million years thought Scott (Bloomquist) would’ve took the bottom (lane for the lap-22 restart to put fourth-place McCreadie on the inside as well) … the bottom never took off all night. I never could get back by (O’Neal). I saw a lot of the blue 71 the rest of the night."

McCreadie summarized his latest consistent outing: “We’re a poster child for third to fifth. We all know in our own pit area that Josh raised his game, Scott’s raised his game, so we better raise ours or we’re gonna fade. This was a good rebound for us.”

Caution flags on laps 21 and 22 resulted from debris on the racetrack. Other caution-inducing problems were a homestretch spin by Darrell Lanigan of Union, Ky., on lap two; the slowing car of Wheelersburg, Ohio’s R.J. Conley on lap eight; a flat left-rear tire for Steve Francis of Bowling Green, Ky., on lap 18; Moran’s misfortune; a turn-four spin by Ben Mott of White Lake, Mich., on lap 26; and a backstretch problem for Mason Zeigler of Chalk Hill, Pa., on lap 48.

Notes: With his victory, Carrier has registered three of his nine career Lucas Oil Series wins in the state of Ohio. He previously won twice at Atomic Speedway in Alma. … Coming off back-to-back podium finishes, Gregg Satterlee of Indiana, Pa., was scheduled to start from the outside pole in the feature. But mechanical trouble struck his car before he reached the initial green flag, forcing him to the pit area without completing a lap. … Boom Briggs of Bear Lake, Pa., logged a season-best finish of seventh. … The Lucas Oil Series travelers get a couple days off before resuming action in the Southeast on Thursday at Fayetteville (N.C.) Motor Speedway, Friday at Cherokee Speedway in Gaffney, S.C., and Saturday at Smoky Mountain Speedway in Maryville, Tenn.