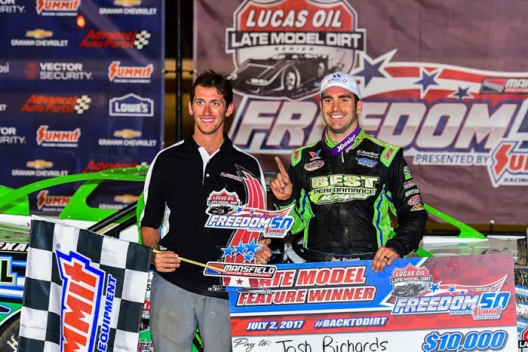 The 28-year-old superstar from Shinnston, W.Va., rolled to a flag-to-flag victory in Sunday night’s Freedom 50 at Mansfield Motor Speedway, keeping him perfect in the first two stops of the Lucas Oil Late Model Dirt Series’s holiday tripleheader in the Buckeye State.

Richards’s $10,000 triumph was his second wire-to-wire score in as many nights, nicely duplicating his success on Saturday evening at Portsmouth (Ohio) Raceway Park. It was his fifth win of 2017 on the Lucas Oil Series, tying him with defending champion Scott Bloomquist of Mooresburg, Tenn., for the national tour’s checkered-flag lead.

Notably, Richards’s back-to-back victories came in the wake of an uncharacteristically inactive June for the four-time World of Outlaws Craftsman Late Model Series champion. His only competitive start during the month was a sixth-place finish in the June 17 Clash at the Mag at Magnolia Motor Speedway in Columbus, Miss.

Armed with a fresh Andy Durham-built engine under the hood of his Best Performance Motorsports XR1 Rocket, Richards was in a league of his own at the 4/10-mile oval that promoter Cody Sommer transformed from an asphalt to a dirt surface for the 2017 season. He burst off the outside pole to grab the lead from polesitter Hudson O’Neal of Martinsville, Ind., at the initial green flag and never looked back.

“This is one awesome track,” said Richards, who was noticeably absent last month’s major events at Eldora Speedway in Rossburg, Ohio (Dream) and Lernerville Speedway in Sarver, Pa. (Firecracker 100). “I was fortunate to be able to come here and run an ARCA race (on the pavement) for (Bill) Venturini (Motorsports) like seven years ago, but to have another dirt track come on board … you don’t see that very often. You see more tracks closing than guys coming on board, so it’s cool to see them put the effort out.

“And with such a facility like this, it’s cool to win the first one for sure.”

Third-starter Gregg Satterlee of Indiana, Pa., overtook O’Neal shortly after the race’s halfway point and finished second, a distant 2.309 seconds behind Richards at the checkered flag. The 16-year-old O’Neal hung on to register a career-best Lucas Oil Series finish of third — putting him on the podium with fellow tour rookie Satterlee — while ninth-starter Darrell Lanigan of Union, Ky., advanced from the ninth starting spot to finish fourth after making a lap-37 pass of Watertown, N.Y.’s Tim McCreadie, whose fifth-place result left him in the same position that he started the race.

Bloomquist finished sixth after starting 11th, shrinking his Lucas Oil Series points lead for the second consecutive night. He left Mansfield with a 55-point edge over Richards, who moved back to second in the standings, and 75-point advantage over McCreadie after entering the weekend leading McCreadie by 160 points and Richards by 225 markers.

Richards had little trouble finding the fast way around the track, which is dirt-covered for the first time since 1998 and hosted its first touring-series special fort Dirt Late Models since a STARS-sanctioned event on May 3, 1996, that was won by Bob Pierce of Oakwood, Ill.

“Everyone was a little skeptical from the races earlier (this year), but they really did a phenomenal job getting it worked in,” Richards said of the showplace Mansfield facility. “It reminds me of a northern track up in New York — it’s slippery and it’s got traction spots. It was a lot of fun for sure.

“I moved around a little bit and some of the lapped cars were a little sketchy, but sometimes you go and it would feel really good and you go back again and it wouldn’t feel as good. As a driver, it’s a lot of fun to be able to move around on the track and pass some cars.”

Satterlee, 32, never seriously threatened Richards, but he was pleased with a performance that matched his best Lucas Oil Series finish of the season.

“We had a great car again,” said Satterlee, who also was a runner-up in the April 23 Lucas Oil event at Port Royal (Pa.) Speedway. “Two top-threes in a row (he was third on Saturday night at Portsmouth) … we just need to get a little bit to catch this green No. 1 car (Richards).”

Satterlee enjoyed his long battle for second place with O’Neal, a teenager who is proving to be a budding star.

“He’s a lot of fun to race with,” Satterlee said of O’Neal. “Unfortunately, he’s only 16, so I think here in a couple years he’s gonna be a real big threat.”

The younger O’Neal was truly at a loss for words after securing his first podium placing on the Lucas Oil Series.

“I’m just happy to be here, happy to run inside the top three,” O’Neal said. “I can’t wait to call my car owner (Todd Burns). He’s gonna be so excited.

The feature at was dotted by a pair of caution flags. Doug Drown of Wooster, Ohio, caused the first slowdown just after the halfway point when he fell off and the pace and Don O’Neal of Martinsville, Ind. — Hudson’s father — slowed with a right-rear flat tire on lap 40 after running as high as fourth.

Notes: Richards, whose Saturday-night victory at Portsmouth snapped a personal nine-race winless streak in Lucas Oil action, has earned three of his five tour triumphs this season in the state of Ohio. He also won on April 21 at Sharon Speedway in Hartford. … Richards has a chance to sweep the Lucas Oil Series tripleheader when the circuits concludes its swing on Monday night at Muskingum County Speedway in Zanesville. … Don O’Neal salvaged an 11th-place finish after pitting to change a tire on lap 40. … Dennis Erb Jr. of Carpentersville, Ill., started fourth and ran in the top five early but faded to a 10th-place finish. … A large crowd turned out for the biggest event at Mansfield since its rebirth as a dirt track this year.