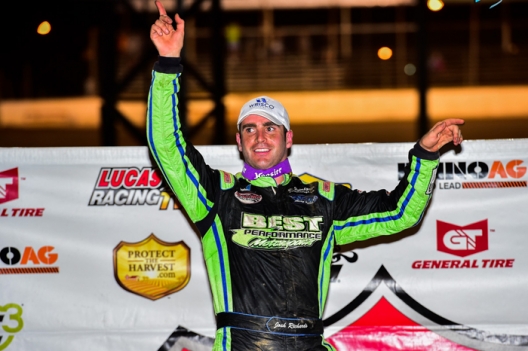 Those emotions included joy and satisfaction after Brock watched his Best Performance Motorsports driver lead every lap of the Independence 60 at Portsmouth (Ohio) Raceway Park for the team’s fourth Lucas Oil Late Model Dirt Series victory of the season along with a $12,000 payday.

The polesitting Richards, of Shinnston, W.Va., gave the Ohio-based team its second home-state victory on the national tour as he turned back a few challenges from runner-up Tim McCreadie of Watertown, N.Y.,  in a dominating performance.

“We’ll definitely take it,” Richards said in victory lane, crediting his wife, team and supporters. “We haven’t raced much the last couple of months, and we’ve just been trying to work on the car and make it better. I can’t thank everyone (enough) at Best Performance for giving me this opportunity. It’s been awesome. It’s been a lot of fun really.

“It’s been a fun year. I think we’ve hit on some things and I think we’re ready to go racing.”

McCreadie came from his sixth starting spot to win a duel with third-place finisher Gregg Satterlee of Indiana, Pa., for the second spot while Clint Bowyer Racing teammates Darrell Lanigan of Union, Ky., and Don O’Neal of Martinsville, Ind., rounded out the top five.

Series points leader Scott Bloomquist started 24th in a backup car and got up to 11th, but he was never a factor as he retired just past the halfway point, slowing in turn two to draw a caution, then failing to reach racing speed upon returning to the track to draw another yellow.

His 18th-place finish allowed McCreadie to cut Bloomquist’s points lead to 80 points from the 170-point margin entering the event. Unofficially, Richards is 105 points behind in third.

Richards, who had his first success at Portsmouth since he drove an Ernie Davis-owned car to a Mid-Atlantic Championship Series victory in 2008, was fast everywhere on the racetrack after getting the jump on fellow front-row starter Brandon Fouts, who faded to finish 10th.

“I thought it was going to be bottom-dominant, and then I think it just kind of got cleaned up and then you could move around wherever,” Richards said. “So hat’s off to the track guys and the weather holding off and everything like that. It was a good night.”

It appeared traffic might give McCreadie a shot at Richards late in the race, but the leader was able to hang on.

“I didn’t really know where to go. I just tried to not to anything crazy and just (stay) smooth,” Richards said. “Those guys throw so much dirty air across the middle (of the track), I was like, I’ve just gotta stay on the bottom and clear ‘em. It worked out tonight.”

McCreadie hoped the lapped traffic might provide an opening, but it never developed.

“He had it just as hard as I did. He earned it. And we’ll take a second,” said McCreadie, who primarily ran the top groove in the first half of the race before moving lower on the track. “That cushion that was up there just got crumby, and there was no more lip. I mean, I really had to lean on the lip on (corner) entry to carry speed, and it just wasn’t up there. And it started to streak a little … it didn’t rubber, but it got clean and the tires were all on. You’re better when you hit that clean stuff.”

Satterlee, who started seventh, held the second spot from laps 32-38, but he settled for third at the end of 60 laps, nearly five seconds behind Richards.

“The car was really good in the feature. I was able to take right off and dig up through there and get right (into) the top two or three there the first half of the race,” Satterlee said. “Once I got into second, that was when we started to fade just a little bit. I was having to scrub too much speed off to get through the corner, and just kind of picked up a little bit of a push.

“But the car was good. Congrats to Josh. I know they were wanting to win as bad as everyone here. I’ll take a top-three. We’ve been trying to work with some new stuff on the car, and I definitely think we’ve got things going in the right direction. We just need to tweak on it a little bit. I think we’re close. We just need to get a little more (speed) and I think we’ll get there.”

Besides the two caution flags for Bloomquist, yellows appeared on the second lap when Craig Wolford spun into the infield, then again for a slowing Charlie Jude on the ninth lap. The final yellow appeared for Eddie Carrier Jr.’s lap-39 spin.