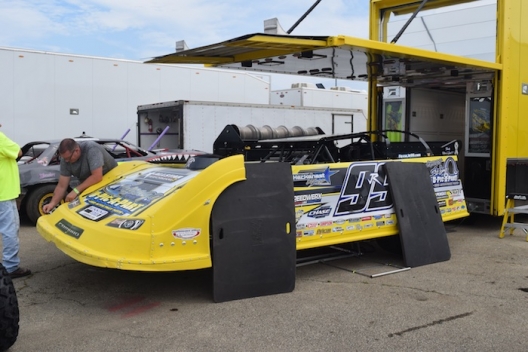 JOLIET, Ill. (June 28) — Because of persistent rain and the potential for dangerous lightning in the area, Wednesday’s FVP Outlaw Clay Classic at Dirt Oval Route 66 Raceway in Joliet, Ill., was postponed as the Late Model feature began to pull onto the track.

With the field already set for the $10,000-to-win feature, the program will now conclude on Oct. 13 as part of the Chi-Town Showdown doubleheader, which is set to continue with another feature event on Oct. 14.

Tickets for Wednesday's postponed program will be honored at face value for the Oct. 13 portion of the event. Those purchasing a June 28 pay-per-view package from DirtonDirt.com will have access to watch the program in full when it is made up on Oct. 13.

In his first-ever visit to Route 66, Chris Madden of Gray Court, S.C., was Wednesday’s overall fast qualifier, tripping the clock with a time of 16.459.Suffering engine problems, Morgan Bagley of Longview, Texas, did not qualify and will pull out a backup car for the remainder of the program. Tyler Erb of New Waverly, Texas, will also go to a backup car after experiencing carburetor issues during time trials.

Because of incoming weather, the decision was made to scrap the consolation and start all 26 cars in the main event. Heat races and the redraw will set the starting lineup for the $10,000-to-win feature.

Rain starting falling around 5 p.m. Central, delaying the program by a couple of hours. Hot laps took the track shortly after 8 p.m. … This makes the second straight year that the Outlaw Clay Classic has been hampered by weather. Last year’s program at Rockford (Ill.) Speedway was also delayed because of rain. … The World of Outlaws tour makes the first of two scheduled stops at Route 66 on the 2017 season. The series is slated to return on Oct. 13-14. … Frank Heckenast Jr. of Frankfort, Ill., and Mike Spatola of Manhattan, Ill., are among driver’s making the shortest drive for Wednesday’s event, traveling less than a half-hour to the Joliet oval. … After taking a few nights off from UMP Summernationals action, Jason Feger of Bloomington, Ill., is in the pits at Route 66. … Donny Schatz of Fargo, N.D., was the winner of Tuesday’s World of Outlaws Sprint show at Route 66. He is piloting a Late Model on Wednesday. … Former series winners Kyle Bronson of Brandon, Fla., and Curtis Roberts of Coleman, Mich., have also joined World of Outlaws competitors in Joliet.

After sitting idle for more than a dozen years, Route 66 reopened in 2017 under the promotion of Sherri Heckenast, sister to World of Outlaws regular Frank Heckenast Jr. of Frankfort, Ill.

While Brandon Sheppard of New Berlin, Ill., enters Wednesday’s event atop the WoO standings, Tyler Erb of New Waverly, Texas, and Dennis Erb Jr. of Carpentersville, Ill., are among the most recent winners in the Route 66 pit area, grabbing UMP DIRTcar Summernationals victories at Tri-State Speedway and Clarksville Speedway, respectively.

Wednesday’s program will include time trials, heat races, consolations (if needed) and the 50-lap main event. Modifieds are among other divisions that will be in action. DirtonDirt.com is offering live pay-per-view coverage of the event.