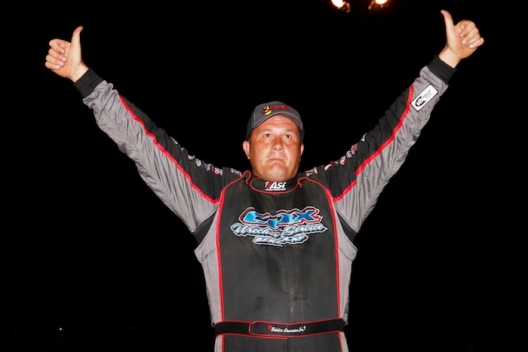 Returning to the site of his 2014 Sunoco North-South 100 victory, the Kentucky native held off a late-race charge from Jason Jameson of Lawrenceburg, Ind., for a $10,000 Schaeffer Oil Spring Nationals triumph at the King family's oval.

“It’s been a long time,” Carrier said in victory lane. “We went through a lot last year. Carl Grover and I split up, he cut his team down. I didn’t know where I was going to go from there. (Jake Keeton and team) gave me the chance to drive their car. I had that wreck and I broke my arm and had another setback.

“Over the winter we got together and built us a new car, a Longhorn car. We got us a Durham Racing Engine. We’re just trying to figure it out, what I like. I guess I just had to come home to get a victory.”

Starting outside the front row, Donald McIntosh of Dawsonville, Ga., charged to the front of the field at the drop of the green flag. But the Blount Motorsports pilot’s lead was short-lived, as contact with a lapped car sent him in to the turn-one wall, forcing him to retire his No. 7 machine under the lap-18 caution.

Carrier inherited the point, battling side-by-side with seventh-starting Steve Casebolt of Richmond, Ind., as the race went back green. Just as Casebolt was set to make a pass for the lead, another yellow flag waved on lap 24 when fourth-starting Cody Mahoney of Madison, Ind., slowed on the frontstretch.

While Carrier was able to maintain his lead on the restart, it was Jameson making his move to the front of the field, rallying from the 17th starting spot to run in fifth by lap 30. Using a late-race caution to his advantage, Jameson powered to the second-place spot, but his charge would come up just short, as Carrier took the Florence checkers.

“We had a good car tonight,” Carrier said. “I don’t know if I would have got Donald (McIntosh) or not. I hate to see that happen to him. I wish I could have raced him for the win. He might have won and I run second. But sometimes you’ve got to put yourself in a position to take advantage of some of that stuff that happens.”

But there was no denying what the victory, his first since Georgia-Florida Speedweeks 2015 and first with the Keaton team, meant to Carrier.

“It means a lot,” Carrier said of his win. “Jake and his dad, they trust us. They spent a lot of money this winter. I’m just finally glad to finally start winning, start being on poles of races and start running up front.”

Notes: Carrier scored his first career SNBS victory; he was the winner of the 2014 Sunoco North-South 100 at Florence. … The race marked Carrier’s first victory since Georgia-Florida Speedweeks 2015. … Runner-up finisher Jason Jameson was the winner of March’s Spring 50 at the northern Kentucky oval. … The race was slowed by three caution. … The first yellow flag waved on lap 18 when race leader Donald McIntosh got in to the turn one wall after making contact with the lapped car of Chris Combs. … Cody Mahoney slowed on the frontstretch to draw a caution on lap 24. … A yellow flag flew on lap 41 for debris on the racetrack. … Austyn Mills of Alexandria, Ky., took a wild took a wild ride in the evening’s first heat race,  climbing over the wall in turns one and two; he was uninjured. ... Josh Rice of Verona, Ky., a former Late Model feature winner at Florence, was the winner of the $2,000-to-win American Modified Series event.