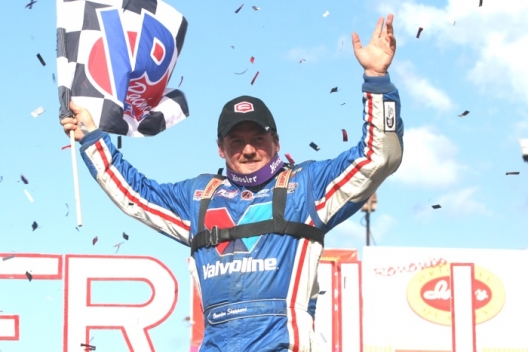 Saturday afternoon proved to be a great time to have the good fortune continue for Sheppard, who took advantage of his number one starting slot — the seventh time he’s led the field to the green flag in a WoO A-main this season — to score a flag-to-flag victory in the 30-lap Firecracker 100 preliminary feature at Lernerville Speedway.

Sheppard, 24, of New Berlin, Ill., tip-toed around the 4/10-mile oval’s tough daytime surface to score his WoO-leading seventh triumph of 2017 in a race that finally kicked off the Firecracker 100 weekend after consecutive preliminary-program rainouts on Thursday and Friday. He was never seriously threatened en route to steering the Rocket Chassis house car to a $6,000 first-place prize by 1.1 seconds over front-row mate Mike Marlar of Winfield, Tenn., who ran in second place for the entire distance.

Chub Frank of Bear Lake, Pa., and Don O’Neal of Martinsville, Ind., started and finished in third and fourth, respectively, on a track that kicked up plenty of dust and became largely one-lane thanks to the hot sun baking the clay. Gregg Satterlee of Indiana, Pa., completed the top five after battling his way forward from the 11th starting spot.

The key for Sheppard, of course, was picking the pole starting spot in the redraw among the top two finishers in each of the four heat races. He knew that starting spot would likely be the determining factor between winning and losing in afternoon conditions.

“Obviously, starting on the pole in a day race was important,” said Sheppard, who padded his already commanding WoO points lead with his 16th top-five finish in 19 A-mains this season. “I don’t know even know how we’ve been so lucky (drawing the pole) … but I didn’t even get to draw today. A little kid drew (the spot) for me and it was last one left, so I guess luck’s just been on my side on that end of the draw.”

Sheppard certainly earned his opportunity to end up on the pole, however. Starting fourth in Heat 4, he had to find a way to crack the top two — and he did, grabbing second on lap nine when Tim McCreadie of Watertown, N.Y., went over the turn-two bank due to a stuck throttle.

“Where I started in that heat race, I could have very easily not even been in that redraw,” Sheppard said. “We’ve just been fortunate enough to be in the redraw what I feel like is almost every night. That means a lot, just to have the chance to start up front with the competition and everybody’s cars being so equal these days. It’s tough to come from the back.”

Sheppard, who won a weekly feature at Lernerville on May 19 driving a Rocket car fielded by Todd Cerenzia, just had to avoid making any major mistakes in lapped traffic to keep Marlar at bay and ring up his 13th career WoO checkered flag.

“It was slippery in (turn) one and two and kind of rubbered up in three and four,” Sheppard said. “I knew if I could just keep getting one (lapped car) a lap that it would end up working out.

“It was rubbered pretty wide getting into (turn) three, and coming out of four it wasn’t rubbered at all so you could really charge the corner and then you just had to turn down and come off wherever you came off. You could really easy drive in under somebody and slide up across their nose, so as long as I kept that bottom lane covered and a lapped car on the outside of me, I was alright.”

The victory doesn’t factor into Sheppard’s positioning in Saturday night’s Firecracker 100 finale program — time trials will be contested again because only one preliminary show was completed due to the rain — but it gave him confidence for the $30,000-to-win blockbuster. He wants to give his car owner, Mark Richards, a second career win in the event.

“Mark really likes this race a lot so he’s been telling me everything that I need to know about what the track’s gonna do,” Sheppard said. “I’m looking forward to tonight.”

Though three caution flags slowed the feature, Marlar was never able to offer Sheppard a serious challenge. The Tennessean was satisfied with a runner-up finish considering the difficult daytime conditions.

“We’re a long way from come so it costs a lot to come up here,” Marlar said. “We got our trip covered now, so we can kind of zero in on tonight. It’s a good way to start the day.”

The veteran Frank, meanwhile, settled into third at the start and stayed there.

“We needed to start up front and we did,” said Frank, who is searching for his first WoO victory since August 2009. “We qualified good, ran decent in our heat race and got in the redraw.

“We can’t do nothing about (the track surface) when we’ve got to race in the daytime, but tonight the track’s gonna be awesome, I guarantee that.”

The race’s three caution flags came late in the distance and were for minor incidents. Joey Coulter of Union Grove, N.C., spun in turn four on lap 21; Alex Ferree of Saxonburg, Pa., slowed on lap 23; and Brandon Overton of Evans, Ga., who won his first-ever WoO feature last year at Lernerville in a postponed preliminary feature run on Saturday afternoon, spun on the inside of turn four on lap 26 while running in sixth place.

Defending Firecracker 100 champion Scott Bloomquist of Mooresburg, Tenn., was an early retiree, pulling to the infield on lap four. He started at mid-pack and decided to save his equipment for the evening’s main event.

Mike Marlar of Winfield, Tenn., turned the fastest overall lap of the afternoon qualifying session, clicking off a circuit of 16.353 seconds in the first group. He will start from the pole position in the first heat race.

Chub Frank of Bear Lake, Pa., was quickest in the second group with a lap of 16.377 seconds, putting him on the pole for the third heat.

Other heat polesitters are Chris Madden of Gray Court, S.C., and Don O’Neal of Martinsville, Ind.

Mike Pegher Jr. of Wexford, Pa., saw his day come to an apparent early end due to terminal engine trouble on his second qualifying lap while Gary Lyle of Leechburg, Pa., did not participate in time trials due to a broken water pump.

Cars began rolling onto the racetrack for hot laps at 2 p.m. and the green flag was thrown roughly five minutes later. … WoO rookie Devin Moran of Dresden, Ohio, has his Hall of Fame father, Donnie, and brother Tristan assisting him today. Both Donnie and Tristan were not at Lernerville before the preliminary program was washed out because they were back at the family’s Muskingum County Speedway in Zanesville, Ohio, helping oversee the track’s All-Star Circuit of Champions Ohio Sprint Speedweek event. … Kyle Bronson of Brandon, Fla., is making his first-ever start at Lernerville as part of an extended road trip that will take him to the Midwest in the coming weeks for WoO, UMP DIRTcar Summernationals and Lucas Oil Late Model Dirt Series events. … Another first-time Lernerville visitor is Chad Hollenbeck of Kingsley, Pa. … Today’s action marks the first time that Davey Johnson of Latrobe, Pa., will race since hiring shock specialist Mark Smith as his crew chief. … Brandon Overton of Evans, Ga., won his first-ever WoO feature in last year’s Firecracker 100 preliminary that was postponed to Saturday afternoon. He’s back this year with the Dream Racing No. 116 team that entered last year’s Firecracker action with Jonathan Davenport of Blairsville, Ga., behind the wheel.

Following two days of rain that washed out both Firecracker preliminary nights, cars are finally set to hit the 4/10-mile Lernerville oval for a day-night doubleheader. Thursday night’s 30-lap, $6,000-to-win World of Outlaws Craftsman Late Model Series preliminary show will begin in the afternoon when the track is ready and the regularly-scheduled 100-lap finale boasting a $30,000 first-place prize will run in the evening.

With the cancellation of Friday night’s preliminary card, WoO officials have changed the Firecracker 100 qualifying format. Results from the afternoon preliminary program will not be used to align the heat races for Saturday evening’s finale; instead, time trials will kick off the night-time action.

Saturday has brought a gorgeous day — skies are sunny and temperatures are in the high 70s — that is greatly assisting in the drying process of the water-logged racing surface. A half-dozen packed trucks began circling the track at about 11:45 a.m.; the drivers' meeting was conducted at 1 p.m. and teams were told to prepare for hot laps to begin at 2 p.m., just an hour behind the originally planned start time.