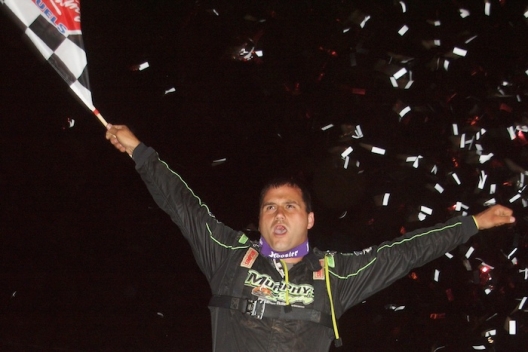 EAST SMETHPORT, Pa. (June 20) — Nine days after the roughest ride of his career, Max Blair enjoyed one of his most memorable moments.

Blair rode out a wild series of flips in a June 11 heat race at Eriez Speedway in Hammett, Pa., badly damaging his car but escaping with only bruises. The setback didn’t stop him from defending his home turf against the WoO’s traveling stars as he passed Morgan Bagley of Tyler, Texas, for the lead on lap 16 and marched on to collect $10,000 for his coveted first-ever win on the national tour.

Emotion spilled from Blair when he reached victory lane at a third-mile oval that he has frequented throughout his budding career.

“I was already yelling in the middle of (turns) three and four (on the final lap) because I felt like I got the entry pretty good,” said Blair, registered his 10th overall feature win of 2017. “Ah, man. I can’t even believe it. I can’t describe it. It’s just amazing.

“I don’t even know what to say, I really don’t. I never dreamed that I’d be standing here. We finally are and it’s awesome.”

Driving his father Rob’s Rocket car — redone with Max’s familiar No. 111 — because his own machine was sidelined by the Eriez accident, Blair kept WoO rookie contender Devin Moran of Dresden, Ohio, several car lengths behind him during the race’s late stages to beat the 22-year-old by 0.973 of a second.

WoO points leader leader Brandon Sheppard of New Berlin, Ill., continued to rack up podium finishes in the Rocket Chassis house car, placing third after overtaking Bagley for the position on lap 38. Third-starter Rick Eckert of York, Pa., finished fourth and Bagley settled for fifth — his second straight top-five finish — after starting from the pole position and leading laps 1-15 in his bid for a career-first WoO triumph.

Blair’s breakthrough came after he and father, who has contended for WoO victories in the past, put in long hours to come back from the potentially season-changing wreck on June 11.

“We destroyed that car a couple weeks ago,” said Blair, who started from the outside pole. “We worked our tails off last week and got this thing turned around and ready, got that other car torn apart. We went to Stateline (Speedway in Busti, N.Y.) last (Saturday) and we won (driving his father’s car for the first time) and felt like we were pretty good, so I was pretty excited to come into tonight.

“But this place is sure a lot different than Stateline so I really didn’t know what to expect.”

Blair never missed a beat at the facility promoted by United Late Model Series director Chris Zuver. He drove around the outside of Bagley off turn four to assume command on lap 16 and survived three late-race caution flags to secure the milestone checkered flag.

“I’ve got to thank a lot of people — number one, my dad,” Blair said. “He has scaled his stuff (driving) back so much the past few years to allow me to live my dream and I can’t tell him how I appreciate that. We’re a (couple days) late, but this is one hell of a Father’s Day present for him.”

The younger Blair also was thinking of another big supporter who would have been thrilled to witness his victory: Genesis Shocks owner Mike Farr, who passed away last October.

“He’s not here, but I know he’s smiling down,” Blair said. “Mike Farr was a huge, huge part of my racing career. I would never have gotten anywhere near where I am today without Mike’s help over the years.

“This one’s for you, buddy,” he added. “I hope you enjoyed it as much as everybody here’s gonna.”

Moran, who started fourth in Tye Twarog’s Rocket, never drew close enough to seriously threaten Blair after grabbing second from Bagley on lap 32. The young talent raced without his father, Hall of Famer Donnie Moran, at the track with him for the first time in four years.

“I really wanted to get that win,” said Moran, whose first-ever visit to McKean County produced his sixth WoO top-five finish of 2017. “I felt like we had the best car all night, but Max did a good job. You gotta give him props. I’m proud of them guys. They worked their butt off …  he totaled a car two weeks ago and they came out there and did what they needed to do and we just needed to be a little bit better.”

The 24-year-old Sheppard quietly advanced two positions from the fifth starting spot to push his points lead to 150 markers over Tyler Erb of New Waverly, Texas, who finished seventh.

“The track was pretty rough, it was tough to pass on,” Sheppard said. “We’ll take a top three and go on to Lernerville (Speedway in Sarver, Pa., for the June 22-24 Firecracker 100).”

The race’s three caution flags flew on lap 35 for Erb, who slowed with a flat tire; lap 36 for Joey Coulter of Union Grove, N.C., slowing in turn four; and lap 39 for Frank Heckenast Jr. of Frankfort, Ill., who spun in turn four after contact with Chub Frank of Bear Lake, Pa., while battling for sixth place.