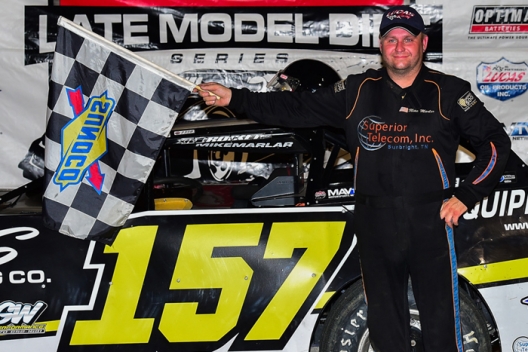 COLUMBUS, Miss. (June 17) — Mike Marlar of Winfield, Tenn., won a race-long duel with Brandon Overton of Evans, Ga., and then held off Dennis Erb Jr. of Carpentersville, Ill., to win the Clash at The Mag. Marlar picked up a hard-earned $12,000 for his seventh career Lucas Oil Dirt Late Model Series victory.

Overton, who led the first 13 laps after starting third, gave up the lead to Marlar early, but never gave up the chase. He managed to wrestle the lead away from Marlar briefly, but could never clear him and was unable to keep him at bay. Following a late caution, Overton slipped to third at the finish behind Erb, while defending race champion Darrell Lanigan of Union, Ky., finished fourth and Kyle Bronson of Brandon, Fla., who started 16th, rallied to a fifth-place finish.

Marlar, who had his hands full fending off challenges from both Overton and Don O’Neal of Martinsville, Ind., on restarts, seemed to have the race in hand when he took the flagman’s five-to-go sign. What he didn’t want to see was a caution on lap 57 of the 60 circuits.

But when Joey Moriarty slowed to bring out the seventh and final caution of the race, Marlar had to summon up one last defense.

“I was just thinking make the race car wide and keep my speed up,” said Marlar. “This place is so slick it takes a couple of laps to get in your rhythm. Honestly I ‘bout give the thing away there … got up the cushion and got all messed up. After I made that (mistake) and got back ahead, I said I’m not messing up from here on out.”

While a lot of drivers made cameos in the top five throughout the race, Marlar and Overton were the only two who were there from the get-go. Third-starting Overton jumped to the bottom and grabbed the lead from the second row — it was a four-wide fight into turn one on the opening lap — bringing Marlar and local standout Brian Rickman with him. Gregg Satterlee of Indiana, Pa., started alongside Marlar on the front row, but was shuffled all the way back to eighth on the first circuit. By the time Boom Briggs of Bear Lake, Pa., slowed to bring out the first of seven caution flags, Overton led Marlar, Rickman, Jimmy Owens and Don O’Neal.

Five of the seven cautions waved in the first 30 laps, slowing action, but setting up a handful of restarts that spiced the action. And every restart was interesting as drivers from the second row on back fanned out on the spacious Magnlia surface looking for a way to the front. O’Neal was in third by lap 20 and Erb, who started ninth, was up to fourth by lap 22. While the cautions — and subsequent double file restarts — may have helped Erb get to the front early, he was hoping that a longer green flag run late in the race would perhaps give him a shot at Marlar.

“Yeah, that’s what I was hoping for. But the cautions kinda hurt me,” Erb said. “It took awhile to get going, but it is what it is. We’ll take second and go on. We had a good car here tonight. We started deep in the field, but we were patient there and worked our way up through there. The car was working real good on the bottom, so to get second here, we’re real happy with that.”

Marlar, meanwhile, was under plenty of duress at the front. After getting by Overton for the lead, the cautions repeatedly wiped away any advantage he was able to build. O’Neal made a bid for the lead on a restart following a caution on lap 27, but once Marlar found his rythym, he assumed the point again and began to pull away.

Despite losing the lead, Overton never wavered and he never fell outside the top five. With eight laps remaining, he pulled even with Marlar again, but couldn’t make the pass. As he watched Marlar pull ahead yet again, Overton suddenly felt pressure from Erb, who had been steering his machine right around the bottom of the track since the opening lap.

“I got up (the track) early and it got a little choppy so I decided to just ride for a little bit,” said Overton. “I kept telling my boys I’m fine, don’t worry about it. I almost had (Marlar) cleared right down here, but you know, he races me clean everywhere we go. I just kept replaying Florence back in the day. That’s what it’s all about, clean racing.

“Once I showed him to close his entry up down there, he kinda sealed the deal.”

Overton had one last chance when Moriarty slowed on lap 57. Knowing Marlar was protecting the bottom, he jumped to the top and hoped for the best. But rather than pull off any last-lap dramatics, he was shuffled to third by the hub-hugging Erb.

“The only thing left was to get up around that wall,” said Overton “They can’t say I wasn’t trying. That last restart he fired off. (Marlar) just had a little more dig than we did, so we’ll just go back to the shop and work on it.”

Notes: Dennis Erb appeared to have Brandon Overton cleared with a handful of laps remaining in the main event, but the pair had trouble getting around the slower car of Joey Moriarty of Phoenix, Ariz. After passing Overton and then getting pinned behind Moriarty, only to watch Overton drive back by, Erb finally gave Moriarty a little tap. Two laps later Moriarty slowed to draw the final caution. … Brian Rickman of Columbus, Miss., ran among the top five until slowing to bring out a caution on lap 25. The defending Mississippi State Championship Challenge Series champion was credited with 21st. … While a number of drivers took advantage of the seven cautions to duck into the hot pit area and make changes or grab new tires, there were no repeat offenders on any of the cautions. All seven involved different drivers. Cautions waved for Boom Briggs (slowed), Jimmy Owens (spin), Rickman (slowed), Eric Cooley (contact with wall), Gregg Satterlee (slowed), Moriarty (slowed) and a frontstretch tangle between Michael Arnold and Ross Camponovo. … Tim McCreadie of Watertown, N.Y., started eighth and was running sixth on lap 25. But when Gregg Satterlee slowed to bring out a caution on lap 30, McCreadie immediately ducked into the pits as well. Returning to the track with apparent front suspension damage, McCredie soldiered on and finished 15th. The rub, however, is that McCreadie’s misfortune came on a night when points leader Scott Bloomquist of Mooreburg, Tenn., had trouble early in the night and and to take a provisional. So rather than chipping into Bloomquist’s points lead, McCreadie actually lost ground to the Bloomquist, who finished 10th. … Owens’s top-five run ended when he jumped the cushion and looped his car in turn two. He apparently packed the front steering components with mud and could not turn his car. He retired and was credited with 22nd.

Josh Richards of Shinnston, W.Va., had engine trouble during qualifying and went to a backup car for his heat. Richards rallied from ninth in the third heat to finish second and earn a transfer spot. ... Series points leader Scott Bloomquist of Mooresburg, Tenn., had apparent ignition trouble while running second in the third heat. Bloomquist started in the rear of his consolation race and finished fifth and will take a provisional to start the main event. ... Boom Briggs of Bear Lake, Pa., will use the other series provisional. … Gregg Satterlee of Indiana, Pa., dominated the third heat in his first visit to Magnolia. ... Before the feaute, track owner Johnny Stokes took about 20 minutes to rework the track surface, which had two distinct black streaks developing. Stokes, a.k.a, Dr. Dirt, worked the top and sprinkled a little water to give drivers another option early in the feature. … Louisiana drivers Dwight Falcon and Manny Falcon loaded up on Saturday morning and headed home. Those are the only two of the original 42 drivers who signed in on Friday who left the facility; no new entries came in on Saturday. … The Lucas Oil drivers are joined by 33 NeSmith Crate Late Model competitors on the undercard.

Mike Marlar of Winfield, Tenn., toured the 3/8-mile oval in 13.923 seconds to set the overall fast time among 40 drivers at the Clash at the Mag. He’s roll off from the pole of the first heat race.

“I had a good car there and I drew a good number,” said Marlar. “I probably had a better race track than a lot of guys there.”

The skies have cleared over Columbus following Friday evening's pesky band of rain showers. Fans are left with a typical southern, muggy afternoon — temps are approaching 90 degrees with the heat index making it feel more like 97 degrees — but that hasn't kept them from lining the Magnolia Motor Speedway grandstands with hundreds of lawn charis in preparations for tonight's Clash at The Mag.

The Lucas Oil Late Model Dirt Series is back in action for the first time since the May 28 Show-Me 100 at Lucas Oil Speedway in Wheatland, Mo. Originally a two-day, $20,000-to-win show, persistent rain on Friday evening forced series and track officials to condense the program into a one day, $12,000-to-win event. Saturday night’s Country Pleasin’ Clash at the Mag features a complete program of time trials, heat races, B-mains and a 60-lap main event.

The Clash at The Mag, which is the only Lucas Oil Late Model Dirt Series race scheduled this month, is the series only visit to Magnolia this season, as well as the only tour stop in the Mississippi.