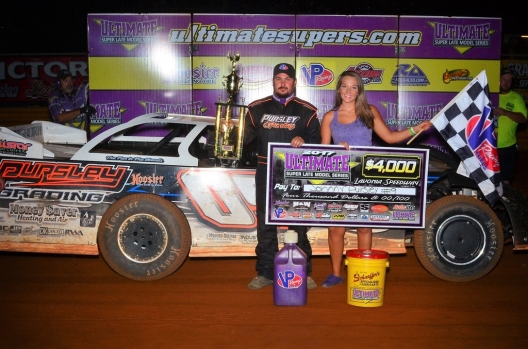 Tony Hammett
Johnny Pursley scored a $4,000 Ultimate victory at Lavonia.
What won the race: Johnny Pursley of Clover, S.C., led every lap of the feature to pick up an Ultimate Southeast Super Late Model Series victory at Lavonia Speedway. He crossed the finish line 0.867 of a second ahead of runner-up Casey Roberts of Toccoa, Ga., in the 40-lapper.
Quotable: "I think we had a good car tonight. I owe all this to my crew," Pursley said. "I tore both race cars up last week, and we busted our butt all week just to get this one back, and we still gotta lot of work to get our other one for tomorrow."
Key notes: The victory marked Pursley's first on the Ultimate Southeast this season and third of his career. ... The race was slowed by a single caution. ... Shane Tankersley was scheduled to start seventh but was unable to make it out to take the green flag. ... No heat races were run for the event; the feature was lined up heads up from time trials.
Winner's sponsors: Pursley’s Longhorn Chassis is powered by a Clements Racing Engine and sponsored by Twin Oaks Racing, Eagle Manufacturing, Farmers Service Center, Pursley Grading and White Horse Limited.
Points chase: Entering the event, Tyler Millwood (241 points) of Cartersville, Ga., led Jonathan Davenport (233) and Jason Welshan (228).
Car count: 14
Fast qualifier: Johnny Pursley
Time: 15.497 seconds
Polesitter: Johnny Pursley
Next series race: June 9, Fayetteville Motor Speedway (Fayetteville, NC) $5,000
Editor's note: Results and race details are unofficial.