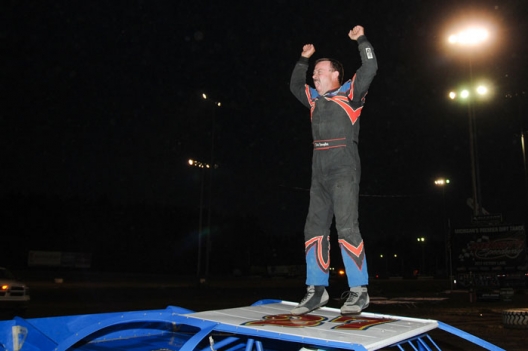 LAKE CITY, Mich. — In more than 30 years of racing at Merritt Speedway, Eric Spangler has a laundry list of impressive success at his hometown track, including five track championships and a World of Outlaws Craftsman Late Model Series victory.

The list is one item longer after Thursday night, and it’s a major addition.

The 48-year-old Spangler collected his richest victory, leading all but two laps of the third annual Merritt Showdown for a $10,000 payday on the American Ethanol Late Model Tour. The outside front-row starter fought off repeated challenges from Dona Marcoullier of Houghton Lake, Mich., taking the checkers eighth-tenths of a second ahead of the runner-up at the finish of the 50-lapper.

Spangler wasn’t surprised to have his hands full with Marcoullier, another former track champion who battled side-by-side with the winner early, edging ahead to lead a couple of laps while working the low groove.

“I seen him there many, many times. I knew he has a real fast car,” Spangler said. “If he was ahead of me, he probably would’ve won this race. … he probably didn’t (screw) up any laps, and I didn’t either.”

Spangler was quick to thank his family, crew along chassis manufacturer “MasterSbilt for all the updates on this thing and making it go fast,” he said in victory lane.

“I grew up here 32 years ago and been running here ever since,” Spangler said. “I’d really like to thank my dad tonight. He helps out. He’s 76 years old. He doesn’t come all the time but he helps out all week during the week. I’d like to thank Roxanne, Brett and everybody else that came tonight that came and helped out on the car.”

Spangler, who has 14 career track championships at three tracks overall, concluded his victory lane interview by whooping it up in victory lane at the track where he’s a three-time Wood Tic winner.

Marcoullier, the reigning Ethanol Tour champion, had a couple of opportunities to be aggressive with Spangler, but ended up settling for a second-place finish that solidified his 2017 points lead on the series.

“It’s just a respect deal. I could’ve went and slid him, but I want to race him another day,” said Marcoullier, who had to go to a backup car after problems in his primary machine Wednesday. “I’m happy. Second place. Good point night. Hat’s off to Merritt Speedway, I know we had some bad weather and stuff.”

Thirlby never got close enough to the frontrunners to mix it up for the victory, but he was pleased with advancing eight positions at the 3/8-mile oval.

“I screwed up qualifying and (we) started deep, and just used my stuff up coming from 11th to third,” Thirlby said. “Congratulations to Eric and Dona, they ran a great race. I’m really looking forward to the next couple of weeks. We’ve got a lotta racing going on, and hopefully (we’ll) get a W.”

The race was slowed by three cautions, none for serious incidents. An early caution appeared when Nick Kurtz went around in turn two while battling with Rich Neiser. Chris Brindley spun to the high side of turn one on lap 29 and the final yellow appeared on the 44th lap for Jason Playter Jr.’s spin off turn four.