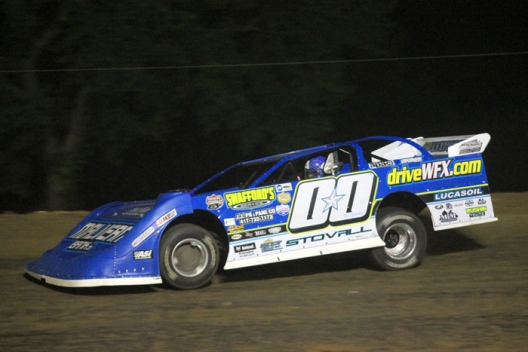 Chris Bork/cbracephotos.com
Jesse Stovall heads to a $3,000 victory at Springfield Raceway.
What won the race: Inheriting the lead from Will Vaught of Crane, Mo., after the two made contact entering turn one, third-starting Jesse Stovall of Billings, Mo., claimed his second MARS West checkered flag of the season, holding off Kyle Beard of Trumann, Ark., in the waning laps. Stovall earned $3,000 at Springfield Raceway.
Quotable: "We was racing hard there and Will just was using all the racetrack he could use there just like anybody would do that had the lead and I was just trying to shoot the gap or whatever you'd call it, and ... I got into the back of him," said Stovall. "I hate it. You know me and Will have had a past or whatever and I don't in no way have any hard feelings about anything that's happened in the past. I know he's pretty mad about it. You know, it is what it is and I can't change it. I really wish it didn't happen. I try to get along with everybody as well as I can on the race track."
Key notes: Stovall previously won in MARS action May 20 at Longdale (Okla.) Speedway. ... A dozen drivers were running at the feature's finish, while eight recorded DNFs including front-row starters Tony Jackson Jr. and Scott Crigler, who slid off the track in turn four. ... Fifth-starting Will Vaught of Crane, Mo., who led much of the race, was disqualified for verbally abusing a series official after the contact from second-running Stovall. ... Vaught and Stovall have a history dating back to the 2010 Show-Me 100, when Vaught rammed Stovall’s car in the hot pit area following an on-track incident; Vaught received a one-year suspension from the Lucas Oil Series. ... The race was the nightcap of an Autism Awareness Extravaganza. The day included a bike and car show, a concert, racing and family-friendly events. … There was a $2,000 Money Drop during intermission sponsored by the Indigo Sky Casino. Twenty fans went to the infield and collected 2,000 $1 bills dropped from above.
On the move: Runner-up Kyle Beard of Trumann, Ark., advanced from 10th.
Winner's sponsors: Stovall’s Black Diamond Chassis is powered by a Scott Bailey Racing Engine and sponsored by driveWFX.com, Malvern Bank, Midwest Sheet Metal, Swafford’s Service, MTS and Rushin Towing.
Points chase: Tony Jackson Jr. of Lebanon, Mo., led the series standings entering the weekend.
Car count: 21
Fast qualifier: Payton Looney
Time: 13.260 seconds
Polesitter: Tony Jackson Jr.
Heat race winners: Jesse Stovall, Scott Crigler, Tony Jackson Jr.
Editor's note: Results and race details are unofficial.