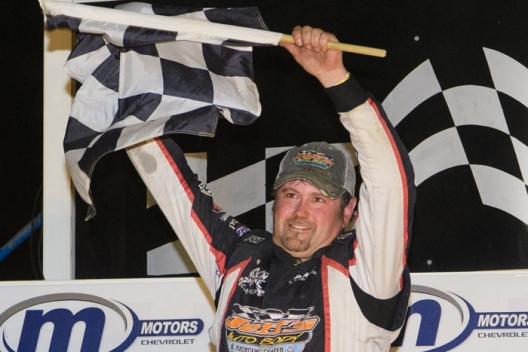 SELINSGROVE, Pa.  — After a 20th-place finish at Bedford (Pa.) Speedway put him in a deep hole halfway through the Ernie D’s Appalachian Mountain Speedweeks, Jeff Rine was near perfect the rest of the way. Rine, of Danville, Pa., didn’t need solid finishes to trek down points leader Jason Covert of York Haven, Pa. He needed great finishes. And over the final three events of the miniseries, he got just that.

Rine, 39, finished first, second and first over the final three races, capping the three-race span with a $4,000 victory Saturday night at Selinsgrove Speedway to capture the series crown by 53 points over Covert for his second AMS title in the last three seasons.

After passing race-long leader Matt Cosner of Ridgeley, W.Va., with 10 laps remaining, Rine paced the field the rest of the way, winning the finale ahead of Rick Eckert of York, Pa., and Cosner. Kyle Hardy of Stephens City, Va., who appeared to have one of the fastest cars on the track until a late-race caution spoiled his effort, was fourth, while Steve Campbell of Danville, Pa., completed the top five after starting 14th.

“I finally beat that freakin’ Rick Eckert and passed him fair and square. That’s awesome,” said Rine, who finished second to Eckert on Friday. “I’ve got a lot of races around this place and restarts are one of my niches, I guess you could say. Hardy went in and jumped the cushion there and I could kinda see that coming. He didn’t have enough speed entering the corner and I turned underneath him coming off the corner. A couple of laps later I got by (Cosner) there. Man it’s just awesome.”

Cosner led the first 28 laps from the front row. He built a huge lead early, stretching his advantage over second-running Eckert to more than a straightaway by lap 20. At one point he led by more than 4 seconds, though his lead was shrinking as Hardy gave chase.

“I had no idea it was that much really,” Cosner said of his early lead. “That makes it a little more disappointing. I would have liked to have seen that stay green. It sounded like we had a pretty good lead, but that happens. I’ve got to get better at restarts. I struggle a little with that sometimes, so we’ll see if I can get better at that.”

Covert, who entered the race with a 27-point advantage over Rine, finished a distant 13th — his season’s worst finish in the series. Covert was still running inside the top six when the caution came out on lap 28, but watched his bid for his first series championship fade away over the final 10 laps.

He couldn’t have picked a worse time for his worst finish. Not only was he nursing the points lead heading into the homestretch, but the series’ final stop came at a track where Rine is a 12-time Dirt Late Model champion and had already picked up a weekly racing series win this season.

It fell right into Rine’s wheelhouse and the veteran racer knocked it out of the park.

“To pull this off, it’s just unbelievable,” said Rine. “Covert, he’s one heck of a racer. I expected him to be right there with me tonight. I guess he must have picked the wrong tire or something. To finish this off at our home track at Selinsgrove, man what a blast.”

Eckert knew it’d be difficult to deny Rine on his home turf.

“Jeff Rine runs around here a lot. He’s the king of this place and there’s a reason,” Eckert said. “He’s up on the wheel around here. I tried to take after him once he got by me there and I changed my line a couple of times. There at the end I could about half run with him, but he was still better than I was.”

For Rine, his second series championship is a bit more rewarding than his first, as his 2015 title came with just two races being completed due to difficulty with Mother Nature. This season, the series lost just one race to rain and completed six of the scheduled seven events. Rine needed them all, especially after the dismal outing at Bedford on June 2.

Rine left Bedford mired in sixth place in the points chase behind Walker Arthur, Covert, Austin Hubbard, Kenny Pettyjohn and Jared Miley. While Arthur, Hubbard and Miley eventually jumped off the series, Rine was still trailing Covert by 33 points as they headed to Port Royal (Pa.) Speedway on June 3. He quickly righted the ship with his first-ever points-paying AMS win. Six days later he backed that up with his runner-up finish at Williams Grove and he was undoubtedly in a groove.

“My step-son Billy called me today and he said, ‘man, Rine, you’ve gotta go get that thing,’” Rine said of the championship hardware, named the Huey for longtime MasterSbilt dealer Huey Wilcoxon, who passed away after an apparent heart attack in 2014. “I’m like, man, we’re gonna try our hardest. Huey was an awesome guy and there’s a lot of race teams that miss him and we’re one of ‘em. It’s cool to win it.”

Notes: Rine and Covert were neck and neck throughout the six contested events. While Rine had a pair of victories, a second, third and fifth, his 20th-place finish at Bedford dropped his average finish to 5.33. Covert meanwhile, had a second and pair of third-place finishes, but finishes of seventh, eighth and 13th dropped his average finish to 6.0. … Due to transponder issues, time trials were scrapped Saturday. Instead, passing points were used in heat races to set the feature lineup. “I wasn’t sure what was gonna happen after the whole time-trial deal and everything. But the race track pulled it together, and you know, that was the fairest way of doing everything and man that race track was phenomenal,” said Rine. … While Cosner was disappointed he let a chance at victory get away from him, he was happy with the progress he’d made with his car during the 11-day speedweeks. “The car was a lot better than we have been all speedweek. We changed some stuff last night that didn’t work and we changed some more tonight and we hit on a little something,” he said.  … Runner-up Rick Eckert finished first, first and second in his three 2017 AMS appearances. ... Defending series champion Kenny Pettyjohn’s third-place finish this season marked his third straight finish of fourth or better in the tour’s points race. … Covert has finished among the final top five in AMS points after eight of the speedweek's nine seasons of existence. … Rine became the series second two-time champion, joining Tim McCreadie of Watertown, N.Y. (’14, ’12). Other champs include Pettyjohn (’16); Gregg Satterlee (’13); Austin Hubbard (’11); Eckert (’10); and Josh Richards (’09).