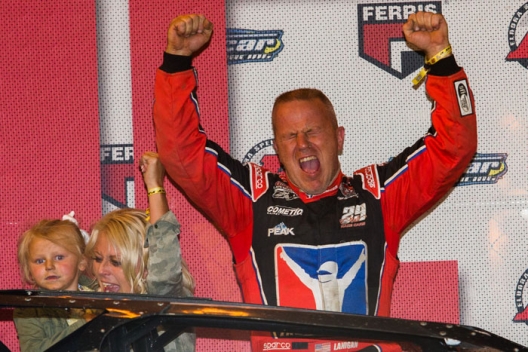 ROSSBURG, Ohio — Shrugging off a penalty for an illegal start, Darrell Lanigan of Union, Ky., led all but three laps Friday night at Eldora Speedway for a 25-lap preliminary victory during Dream XXIII presented by Ferris Mowers weekend.

Ninth-starting Chris Madden of Gray Court, S.C., gained ground on Lanigan late in the race but settled for a second-place finish, 1.318 seconds behind at the finish. Thursday preliminary winner and six-time Dream winner Scott Bloomquist of Mooresburg, Tenn., who slipped by polesitter Zack Dohm of Cross Lanes, W.Va., in the final laps, was third while Dohm and Shane Clanton of Zebulon, Ga., rounded out the top five.

Lanigan was scheduled to start fourth, but because he wasn’t nose-to-tail with the car in front of him, officials called back the initial start and put him in the sixth starting position. It didn’t matter as Lanigan’s put his Clint Bowyer Racing machine quickly into third spot and set his sights on the lead.

“The car was awesome,” Lanigan said. “I got penalized there at the beginning. I really didn’t know you weren’t allowed to go all the way to the top there, as long as you stayed in position. But the car was good. I got around them pretty quick there and once I got in clean air it was awesome.

“We brought a really good piece up here,” Lanigan said on the victory stage. “All my guys, they’ve worked their butt off. I have to thank everybody on this car,” Lanigan added. “It’s been a while since I’ve been up here, so it’s definitely nice to be back up here."

Dohm took command early in the inside lane with outside front-row starter Kyle Bronson, Lanigan and Clanton giving chase.

Lanigan moved up to second with a lap-three slide job in turn three, then used the outside lane to go around Dohm and take command on the fourth lap, nipping Dohm at the line.

From there, Lanigan pulled away from Dohm while Bronson, Shane Clanton and Bloomquist were holding top-five spots as Madden started to get rolling behind them.

Madden continued his charge, moved into fourth on lap eighth, took third from Bloomquist on lap 14 and finally past Dohm on lap 17.

By then Lanigan was too far ahead for Madden to catch, but the South Carolina driver gave it his best shot.

“I think two more laps and we would have had him,” said Madden, who is among the top points earners from Thursday and Friday’s prelims heading for Saturday’s $100,000-to-win finale. “We had a great race car. Those guys started up front ... same thing as last night. We need more than 25 laps. I’m looking forward to tomorrow for sure.”

“We just tried a couple of different things tonight,” Bloomquist said. “We were pretty good last night. We got a good night’s test. More than likely we’ll end up going back to what we were running last night.”

The 25-lapper’s lone caution appeared for Lanigan’s illegal start. Timothy Culp was penalized for not following the nose-to-tail rule on the second start, but no caution was thrown and he was unofficially docked in the final rundown from ninth to 11th..

Polesitter Jason Jameson shot to the lead on the opening lap, as Jason Feger and Rusty Schlenk battled for the fourth and final transfer spot. Second-starting Devin Gilpin worked the high side, reeling in Jameson as the race neared the halfway mark. As the battle continued up front, seventh-starting Jimmy Owens joined the challenge for the last transfer spot. Gilpin edged ahead of Jameson at the line to lead lap eight, as Owens moved in to the third-place spot. Gilpin held off Jameson to win the consolation, with Jameson, Owens and Schlenk transferring to the feature.

Dennis Erb Jr. couldn’t believe his eyes when race-long leader Chris Madden made his lane choice for a double-file restart with two laps remaining in the first heat. “I was actually kind of surprised that Chris picked the bottom there,” said Erb, who watched Madden spin his wheels into turn one when the green flag flew and bolted from third to first to score a dramatic win. … Jeep Van Wormer figured he must have run over something on the racetrack to blow a right-rear tire while holding a transfer spot with one lap remaining in Heat 1. “It doesn’t look like there was anything rubbing,” he said. … Timothy Culp wore a broad smile after capturing the second heat over a fast-closing Scott Bloomquist. “It’s crazy just to be out here and race with these guys,” he said. “It’s a great confidence builder for me.” … With a Heat 3 triumph, Donald McIntosh rebounded well from a Thursday-night outing that started off poorly when he slapped the wall hard in time trials. “I can’t thank these guys enough for standing behind me,” said McIntosh, who is seeking his first-ever start in the 100-lap Dream feature. “We had a rough night yesterday.” … Shane Clanton was still looking for more speed out of his Capital Race Car after winning the fourth heat. “We changed a lot of stuff (after finishing fourth in a Thursday feature),” he said. We’ve been working hard to get our car balanced, but we’ve got more work to do.”

Outside polesitter charged ahead to take an early lead, as third-starting Darrell Lanigan slipped past Hudson O’Neal to run in second. With the top-four pulling away, a close battle ensued between Chris Ferguson, Spencer Diercks and Jason Feger for the final transfer spot. Holding nearly a straightaway lead, Clanton won the heat race, with Lanigan finishing second. Mike Mataragas finished third, with O’Neal running fourth. Ferguson ran fifth to transfer to the feature.

Working around the bottom of the racetrack, polesitter Kyle Bronson lead the opening lap, as Jimmy Owens began his charge from the tail of the field. Outside polesitter Donald McIntosh slipped ahead to lead the second lap, as Rodney Sanders and Jackie Boggs battled for the third-place spot. Narrowly sliding ahead of Boggs, Tyler Erb moved in to fourth at the halfway mark. McIntosh won the heat race, with Bronson, Erb, Sanders and Boggs transferring to the main event.

Taking in three-wide down the backstretch, third-starting Timothy Culp sloped ahead of the front row starters to lead the first lap, with outside polesitter Jake O’Neil edging ahead to lead the second circuit. Culp regained the lead a lap later, with Scott Bloomquist working back to the front after getting shuffled back early. Bloomquist slid in to the second spot on lap seven, with fifth-starting Brandon Overton challenging O’Neil for third. Culp picked up the heat race win, with Bloomquist and Overton rounding out the podium.

Charging around the high side, outside polesitter Chris Madden jumped to an early lead. As Madden distanced himself from the field, fourth-starting Dennis Erb Jr. set his sights on second-running Jeep Van Wormer, with Shannon Babb battlingFrank Heckenast Jr. for the fifth and final transfer spot. With Madden holding nearly a half-track lead over the field, Zack Dohm slipped ahead of Erb and Van Wormer down the backstretch to move in to second on lap nine. A yellow flag waved on the ninth lap when Van Wormer slowed in turn four with a flat tire, setting up a green-white-checkered finish. Using the restart to his advantage, Erb grabbed the lead on the restart, edging ahead of Dohm to win the heat race. Dohm finished runner-up with Madden, Heckenast and Babb transferring to the feature.

Last year's Dream winner Dennis Erb Jr. of Carpentersville, Ill., clicked off the fastest lap of qualifying, circling the oval in 17.819 seconds early in the session. His time was 2.1 seconds slower than Friday night’s quick qualifier.

Jimmy Owens of Newport, Tenn., failed to log a qualifying circuit for the second consecutive night. After smacking the wall during his time-trial run on Thursday, the former Dream winner sat out qualifying tonight because he slapped the concrete during hot laps and wasn’t able to repair his car’s damaged rear deck in time to get back on the track.

Tim Manville of Highland, Ill., also didn’t turn a qualifying lap because he did not have his the broken retainer on his car’s engine repaired.

The briefest of showers passed through the area around 1 p.m., but the skies cleared wonderfully and the temperature topped 80 degrees as the start of hot laps approached. … DIRTcar officials brought 25 drivers to Eldora’s infield care center on Friday afternoon to conducted random drug tests under the World Racing Group’s new-for-2017 drug testing policy. … WRG’s affiliation with Eldora for the UMP DIRTcar-sanctioned Dream also includes the use of the World of Outlaws Craftsman Late Model Series truck and trailer, which is parked in the pit area and has been designated as the place where top-finishing teams must take their tires for postrace sampling. … Tyler Erb of New Waverly, Texas, who is ranked third in the WoO points standings, struggled on Eldora’s slick Thursday surface and didn’t qualify for a feature. After missing just one A-main field this season before last night (the Lucas Oil Series Bad Boy 98 at Batesville, Ark., in April), Erb admitted his DNQ was “frustrating, but it’s a reality check.” … Jerry Bowersock of Wapakoneta, Ohio, is missing from Friday’s night’s field after competing on Thursday. Bowersock, who plans to be back for Saturday’s finale, racing his open-wheel modified tonight at Limaland Motorsports Park in Lima, Ohio, where he’s ranked second in the points standings and chasing a NASCAR-sanctioned title that pays $6,000. … Tim Manville of Highland, Ill., who ranked 38th in Dream points after Thursday, discovered a broken retainer in his car’s engine late Friday afternoon while prepping for the evening’s action. At the start of practice his team was awaiting a replacement part to arrive from engine builder Mike Dargie’s shop in Richmond, Ind.; with an estimated half-hour fix, the likelihood of Manville participating in time trials appeared slim but he was considering tagging a heat race if repairs were made in time. … Matt Lux of Franklin, Pa., had some trouble getting comfortable Thursday in his first appearance at Eldora since 2008, but he gained confidence with his consolation race performance in. “We made some changes and I felt pretty good,” said Lux, who returned to Eldora because his car owner, Jim Detman, had never been to the track and wanted to make the trip. “Hopefully we’ll be better tonight.” … Another driver back at Eldora this weekend after a lengthy absence is Brian Harris of Davenport, Iowa, who accepted an offer to drive veteran Iowan Jay Johnson’s Black Diamond machine just days before the start of the event. The 38-year-old Harris didn’t qualify in his first Dirt Late Model start since the end of the 2015 season when he decided to stop racing because he was hampered by lingering effects of a serious neck injury he suffered in a 2007 crash at West Liberty (Iowa) Raceway. Harris said exercises he’s been doing over the past year have eliminated the pain he was feeling, prompting him to climb back behind the wheel.