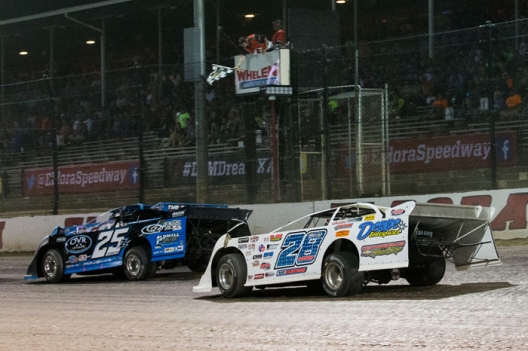 ROSSBURG, Ohio — Mason Zeigler endured a few tense moments in wrestling the lead from Tim McCreadie. And a few more in holding off Jimmy Mars.

The 24-year-old driver from Chalk Hill, Pa., indeed survived a few scrapes but held on Friday for a thrilling victory at Eldora Speedway, earning $10,000 in the last of four preliminary features during the Dream XXIII presented by Ferris Mowers weekend.

“To come here and win this race, even though it’s not the Dream, it’s a preliminary night, everyone’s here and it’s a huge accomplishment for us,” Zeigler said on the victory stage at the historic Eldora oval. “We’re just super excited.”

A late charge by Mars, of Menomonie, Wis., fell three-tenths of a second short while McCreadie, of Watertown, N.Y., settled for third after leading the first 14 laps. Chris Simpson of Oxford, Iowa, and Brandon Sheppard of New Berlin, Ill., rounded out the top five in the 25-lapper.

Zeigler has been close to Eldora glory before on a major-race weekend, challenging for the lead in the second half of 2014's World 100 before spinning while battling for the lead. He admitted he "threw it away just driving over my head.”

This time, Zeigler was able to keep his wits about him despite a few close calls.

“I about did the same thing,” he said. “I knocked the right-front toe out. Jimmy was coming there at the end and I was just hanging on. We’re just thrilled to be here.”

Zeigler tracked down McCreadie amid traffic just past the halfway point, and still found himself battling slower cars with Mars and McCreadie still in contention in the final laps.

“(The slower drivers) don’t know you’re back there, so I was just trying to stay cool and not trying to slide them and open the door for Jimmy,” said Zeigler, who scored an Eldora victory last October in Sunoco American Late Model Series action. “They didn’t know I was there. They were racing two-wide and I really couldn’t do anything with them. There that last lap, I think I would have been able to split them coming in and I would have been able to walk away again. It was getting close there.”

Mars, whose runner-up finish followed a third-place finish in Friday’s prelim, didn’t quite have enough time to overtake Zeigler.

“The car started feeling pretty good there,” said Mars, the 1997 Dream winner. “At the beginning, I don’t know if that was water a little bit up top … I didn’t feel real good at the beginning. Toward the end the car got real balanced and felt real good. You always want another lap, but I guess we’ll take a second.

“It feels pretty good. It’s kind of weird. You can get a good set of tires sometimes or a bad set that maybe don’t come in right away. It kind of throws things for a little bit of a loop you’re really unsure. I just didn’t take off very good on the start. We’ll take that and move on to tomorrow night.”

McCreadie, who finished fifth in a Thursday prelim after running second late in the race, was third after leading the first 14 laps.

“We were a good bit better last night,” McCreadie said. “We need to be a little better. I was married to that little brown streak up there and once it got where you couldn’t leave off two up there I was kind of a sitting duck. I think we can be a little bit better tomorrow, which is hopefully good.”

The feature ran caution-free with 18 of 24 starters finishing on the lead lap.

Jacob Hawkins launched from outside the front row to grab a lead he'd never give up. He built his margin to five seconds by halfway to transfer to the main event along with Shanon Buckingham, sixth-starting Eddie Carrier Jr. and Brian Shirley. The race ran caution-free.

Brandon Sheppard made a quick turn in his Dream fortunes with his convincing Heat 1 victory. “We got a real good piece tonight,” said Sheppard, who struggled in his heat on Thursday and finished 13th in his A-main. “We a little bit off last night, but we’ve been working real hard … we’ll see what we can do in the feature.” … Bobby Pierce made a simple pronouncement after running away with a victory in the second heat: “Man, this car feels great right now.” … Billy Moyer’s Heat 3 win duplicated his score in a Thursday prelim, but he expressed a more positive feeling after his latest score. “We felt better there than we did last night,” he said. … Tim Manville had his car’s engine repaired in time to start the third heat and he rebounded well, charging from the 10th starting spot to finish fourth and crack the feature lineup. … Jimmy Mars — the Dream winner exactly 20 years ago — said his car “felt real good on the bottom” as he recovered from an opening-lap slip up the track on a cool tire to claim the fourth heat by 1.782 seconds over Steve Francis.

Recovering from a poor start that saw him sitting sixth on the first lap, former Dream winner Jimmy Mars went under Steve Francis exiting turn four to take control halfway through the 10-lapper. Steve Francis, who emerged from a free-for-all start on the first lap to take command, held on to finish a solid second with polesitter Billy Moyer Jr. fighting off Jonathan Davenport to finish third. Davenport and seventh-starting Steve Casebolt got the final transfer spots in the caution-free prelim. Andrew Reaume started outside the front row and faded to finish seventh.

Two-time Dream winner Billy Moyer got rolling on the high side, pulling away from fellow front-row starter Chris Simpson for the victory. Devin Moran finished third with tail-starting Tim Manville in fourth and Ricky Weiss in fifth. Manville, who made a daring mid-race move between Rod Conley and Jon Henry entering turn three just before the midway points, tagged the tail of the heat after engine problems kept him out of time trials. Jeff Beyers took a single lap and retired in the caution-free heat.

Bobby Pierce used early high-side momentum to get out front, then cruised to a 10-lap victory. Earl Pearson Jr. muscled past polesitter Mason Zeigler on the third lap, but Zeigler dove under Pearson on the eighth lap in turn one to regain the spot. Pearson settled for third with Mike Marlar not far behind in fourth and former Dream winner Dale McDowell grabbing the fifth and final transfer spot. A piece of debris on the frontstretch was picked up before the race began, but the race ran caution-free.

Breaking away from a first-lap side-by-side duel with fellow front-row starter Kent Robinson, high-running Brandon Sheppard shook off Thursday's subpar performance by cruising to a 10-lap heat victory. He won by more than three seconds. Fifth-starting Tim McCreadie used the inside lane to race to a second-place finish while Robinson settled for third. Don O'Neal was fourth and R.J. Conley, the night's second quick qualifier, nabbed the fifth and final transfer spot.

Last year's Dream winner Dennis Erb Jr. of Carpentersville, Ill., clicked off the fastest lap of qualifying, circling the oval in 17.819 seconds early in the session. His time was 2.1 seconds slower than Friday night’s quick qualifier.

Jimmy Owens of Newport, Tenn., failed to log a qualifying circuit for the second consecutive night. After smacking the wall during his time-trial run on Thursday, the former Dream winner sat out qualifying tonight because he slapped the concrete during hot laps and wasn’t able to repair his car’s damaged rear deck in time to get back on the track.

Tim Manville of Highland, Ill., also didn’t turn a qualifying lap because he did not have his the broken retainer on his car’s engine repaired.

The briefest of showers passed through the area around 1 p.m., but the skies cleared wonderfully and the temperature topped 80 degrees as the start of hot laps approached. … DIRTcar officials brought 25 drivers to Eldora’s infield care center on Friday afternoon to conducted random drug tests under the World Racing Group’s new-for-2017 drug testing policy. … WRG’s affiliation with Eldora for the UMP DIRTcar-sanctioned Dream also includes the use of the World of Outlaws Craftsman Late Model Series truck and trailer, which is parked in the pit area and has been designated as the place where top-finishing teams must take their tires for postrace sampling. … Tyler Erb of New Waverly, Texas, who is ranked third in the WoO points standings, struggled on Eldora’s slick Thursday surface and didn’t qualify for a feature. After missing just one A-main field this season before last night (the Lucas Oil Series Bad Boy 98 at Batesville, Ark., in April), Erb admitted his DNQ was “frustrating, but it’s a reality check.” … Jerry Bowersock of Wapakoneta, Ohio, is missing from Friday’s night’s field after competing on Thursday. Bowersock, who plans to be back for Saturday’s finale, racing his open-wheel modified tonight at Limaland Motorsports Park in Lima, Ohio, where he’s ranked second in the points standings and chasing a NASCAR-sanctioned title that pays $6,000. … Tim Manville of Highland, Ill., who ranked 38th in Dream points after Thursday, discovered a broken retainer in his car’s engine late Friday afternoon while prepping for the evening’s action. At the start of practice his team was awaiting a replacement part to arrive from engine builder Mike Dargie’s shop in Richmond, Ind.; with an estimated half-hour fix, the likelihood of Manville participating in time trials appeared slim but he was considering tagging a heat race if repairs were made in time. … Matt Lux of Franklin, Pa., had some trouble getting comfortable Thursday in his first appearance at Eldora since 2008, but he gained confidence with his consolation race performance in. “We made some changes and I felt pretty good,” said Lux, who returned to Eldora because his car owner, Jim Detman, had never been to the track and wanted to make the trip. “Hopefully we’ll be better tonight.” … Another driver back at Eldora this weekend after a lengthy absence is Brian Harris of Davenport, Iowa, who accepted an offer to drive veteran Iowan Jay Johnson’s Black Diamond machine just days before the start of the event. The 38-year-old Harris didn’t qualify in his first Dirt Late Model start since the end of the 2015 season when he decided to stop racing because he was hampered by lingering effects of a serious neck injury he suffered in a 2007 crash at West Liberty (Iowa) Raceway. Harris said exercises he’s been doing over the past year have eliminated the pain he was feeling, prompting him to climb back behind the wheel.